Functional Condition of Patients after Unilateral Hip Arthroscopy in the Process of FAI—Femoroacetabular Impingement: A Case–Control Study and Preliminary Report
Previous Article in Special Issue

Cardiac Arrhythmias in Muscular Dystrophies Associated with Emerinopathy and Laminopathy: A Cohort Study

The so-called Brugada syndrome (BS), first called precordial early repolarization syndrome (PERS), is characterized by the association of a fascinating electrocardiographic pattern, namely an aspect resembling right bundle branch block with a coved and sometime upsloping ST segment elevation in the precordial leads, and major ventricular arrhythmic events that could rarely lead to sudden death. Its electrogenesis has been related to a conduction delay mostly, but not only, located on the right ventricular outflow tract (RVOT), probably due to a progressive fibrosis of the conduction system. Many tests have been proposed to identify people at risk of sudden death and, among all, ajmaline challenge, thanks to its ability to enhance latent conduction defects, became so popular, even if its role is still controversial as it is neither specific nor sensitive enough to guide further invasive investigations and managements. Interestingly, a type 1 pattern has also been induced in many other cardiac diseases or systemic diseases with a cardiac involvement, such as long QT syndrome (LQTS), arrhythmogenic right ventricular cardiomyopathy (ARVC), hypertrophic cardiomyopathy (HCM) and myotonic dystrophy, without any clear arrhythmic risk profile. Evidence-based studies clearly showed that a positive ajmaline test does not provide any additional information on the risk stratification for major ventricular arrhythmic events on asymptomatic individuals with a non-diagnostic Brugada ECG pattern.
Keywords: ajmaline challenge; Brugada syndrome; early repolarization syndrome; arrhythmogenic right ventricular cardiomyopathy; long QT syndrome; hypertrophic cardiomyopathy ajmaline challenge; Brugada syndrome; early repolarization syndrome; arrhythmogenic right ventricular cardiomyopathy; long QT syndrome; hypertrophic cardiomyopathy

The so-called Brugada syndrome (BS), initially called precordial early repolarization syndrome (PERS) [1,2], is mainly characterized by an aspect resembling right bundle branch block, with a coved and sometime upsloping ST segment elevation in the precordial leads (defined as type 1 and 2 patterns) (Figure 1). This electrocardiogram (ECG) has a frequent dynamic behavior, changing from a normal trace to the two types. This ECG pattern that has historically been described as a benign entity [3] has been later rarely associated with arrhythmic cardiac death, and this association has become a popular syndrome nowadays described in more than 5000 papers. The first reports of PERS in a healthy young man [1,2], resuscitated from sudden cardiac death (SCD), was published early in 1988–1989 by Andrea Nava and Bortolo Martini, but became popular a few years later with a different name [4]. Since those old years, many efforts have been made to understand the pathophysiology of this strange ECG (depolarization or repolarization abnormality?), and to identify a correct risk stratification for the affected population. There is robust evidence that the true syndrome, namely the association of a major arrhythmic event and the mentioned ECG pattern, is so rare, but the same cannot be said for the ECG pattern alone. It is noteworthy that many other cardiac or extracardiac conditions, called phenocopies, may share this electrocardiographic pattern [5] but their arrhythmic risk is still unknown, also if they often induce a lot of fear (Brugadaphobia), and an unjustified complex diagnostic and therapeutic management. There has been a rush in medical literature to publish additional patterns to the spontaneous ECG, which could indicate and multiplicate people at risk, but unfortunately at present time, nobody has identified the gold standard, and all this literature is probably nothing more than an anecdotal collection. This paper will discuss, among all the available diagnostic tools, the drug inducible type 1 pattern whose specificity and role in the risk stratification are so controversial, with more doubts than confidences.

In the worldwide literature, there is an insistent confusion between a syndrome and an ECG pattern alone. A syndrome is the association between symptoms and signs, but the isolated detection of an abnormal ECG does not authorize anybody to make a diagnosis of a lethal condition that is an act that may only induce a severe psychiatric illness in many healthy young people. The true syndrome is so rare, while the isolated type 1 ECG pattern can probably be found in 1 out of thousand people, with the highest prevalence among the Asian population, and type 2 and 3 in up to 3% of healthy people in many reports (Figure 1). A major event can however yearly occur respectively in 0.38 and 0.06% of spontaneous and drug-induced type 1 pattern [6], values like the yearly rate of sudden death in the general population (0.1%).
There is not a typical ECG of the syndrome, that can vary over time, but there is an ECG pattern (defined as type 1), which is more frequent in the true cases of the syndrome. A popular classification in three types, however, does not have a scientific basis as it was only the description of the dynamic behaviour in one single patient [7]. This classification (whence type 3 has now been erased), and the recording of the precordial leads in the upper intercostal spaces has been severely abused. Asymptomatic healthy individuals incidentally found (both spontaneously or drug related) to have one of these three patterns have (and are) been submitted to invasive studies and therapies. Type 1 ECG is indeed a fascinating pattern, that in the true syndromes is more frequently associated to other features, such as a major familial incidence, genetic abnormalities, QRS fractioning, PR interval prolongation, left axis deviation, abnormal electrophysiological investigations, and presence of late potentials, are frequently found in patients with the syndrome [8], but all these findings do not reach enough statistic power to establish any serious evidence-based guideline.

3. The Pathophysiological Basis of the Coved Type ECG Pattern

This topic has been the subject of a heavy debate as this pattern, whether inducible or spontaneous, is still poorly understood as well as its prognostic value. Many theories have been proposed, but two major hypotheses have been debated: an organic disease [1,2] vs. a functional abnormality [4]. The first one suggested a conduction delay at the right ventricular outflow tract (RVOT) level as the origin of the ECG pattern and this was retained part of some right ventricular cardiomyopathy as demonstrated by old necropsy study and confirmed by different authors [8,9,10,11]. The disease mainly involves the conduction system (that explains the right bundle branch block (RBBB) pattern, the PR prolongation, the left axis deviation, and the presence of late potentials), and is probably closer to Lev-Lenegre disease (same SCN5A genetic abnormality and fibrosis of the conduction system) than to the typical right ventricular cardiomyopathy (ARVC), that has usually different clinical and genetic findings. The ST elevation is a depolarization, rather than a repolarization abnormality, probably reflecting a lesion of the Purkinje network at the RVOT that could also have some embryologic origin [12]. The functional theory instead, proposed that a difference in the action potentials between epicardium and endocardium, (due to ionic channels abnormalities) gives origin to the ECG [13,14]. The organic theory was initially refused [15] and a greater attention was devoted to the functional one that has recently almost been abandoned [16,17]. A re-writing of the controversial history of this syndrome has then been re-proposed [18].

Ajmaline is a drug that has been extensively used throughout the electrophysiological world. Its main role is to enhance various degree of conduction defects [55]. What we can derive from evidence-based study, is that a positive ajmaline test, nowadays, does not provide any clear additional information on the risk stratification for major ventricular arrhythmic events on asymptomatic individuals with a non-diagnostic Brugada ECG pattern, but surely those individuals have a low risk arrhythmic profile. This conclusion reaffirms the wise statements of Sami Viskin: “To conclude, a note of caution: in a recent study simulating screening for Brugada syndrome, as many as 45% of healthy control subjects had minor imperfections in the right precordial leads that could be interpreted as type 2/3 Brugada ECG. We are forced to wonder how often asymptomatic individuals enter a path to rule out BS for the wrong reasons, have a false positive ajmaline test followed by a positive EP study, and faced with the alternative of facing sudden death, end up with an unjustified ICD implantation. Considering the imperfections of the ajmaline test, the study by Tadros has a clear message: A positive ajmaline test does not always mean you have Brugada syndrome” [56]. 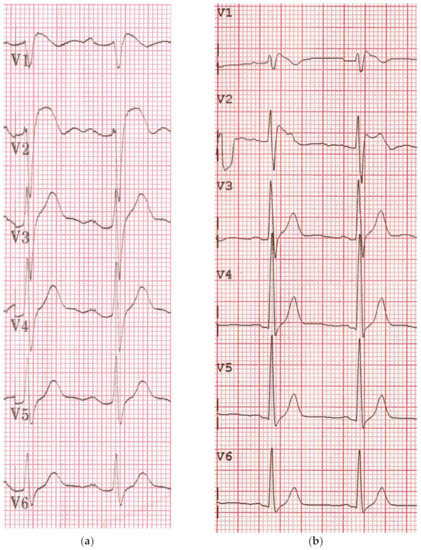 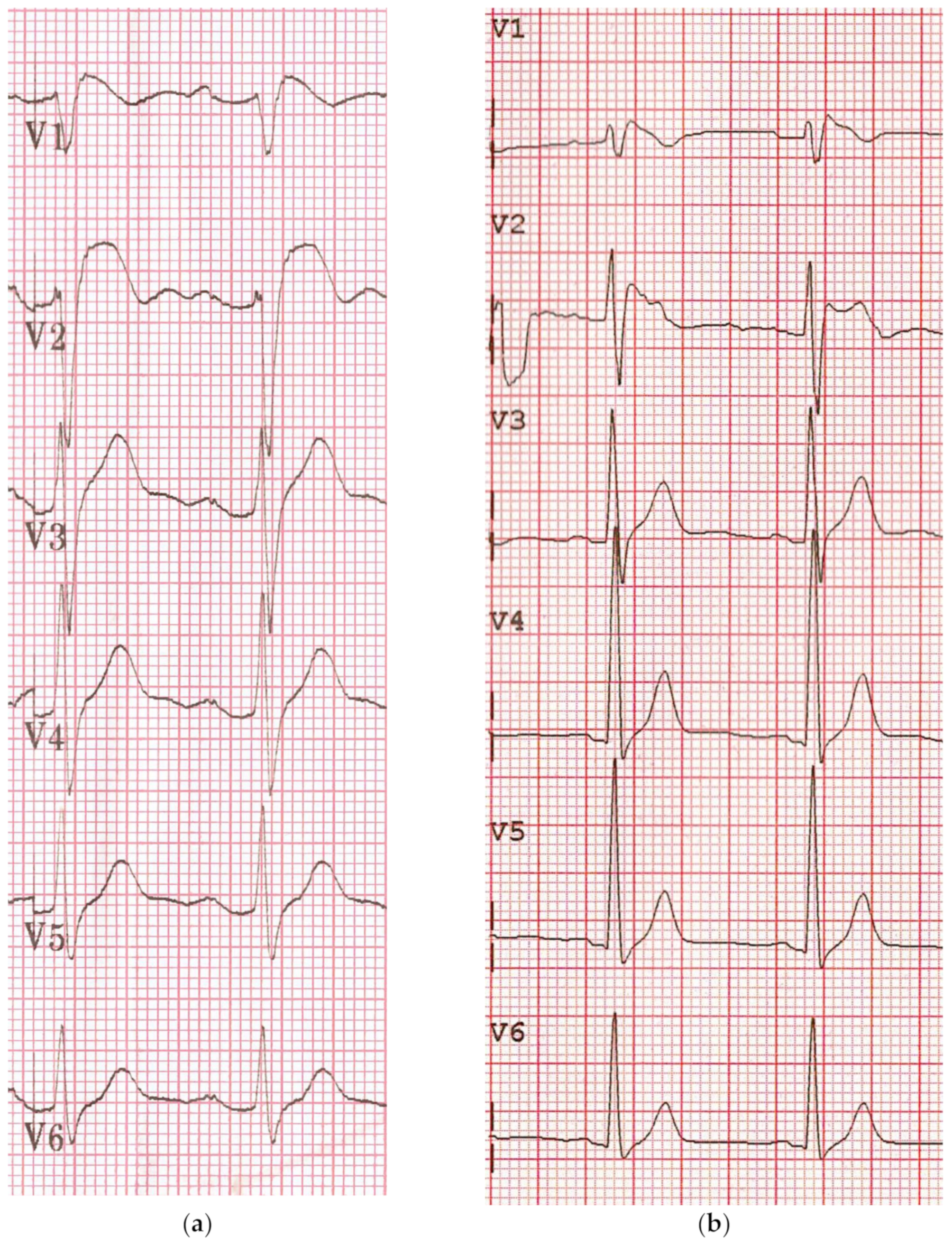 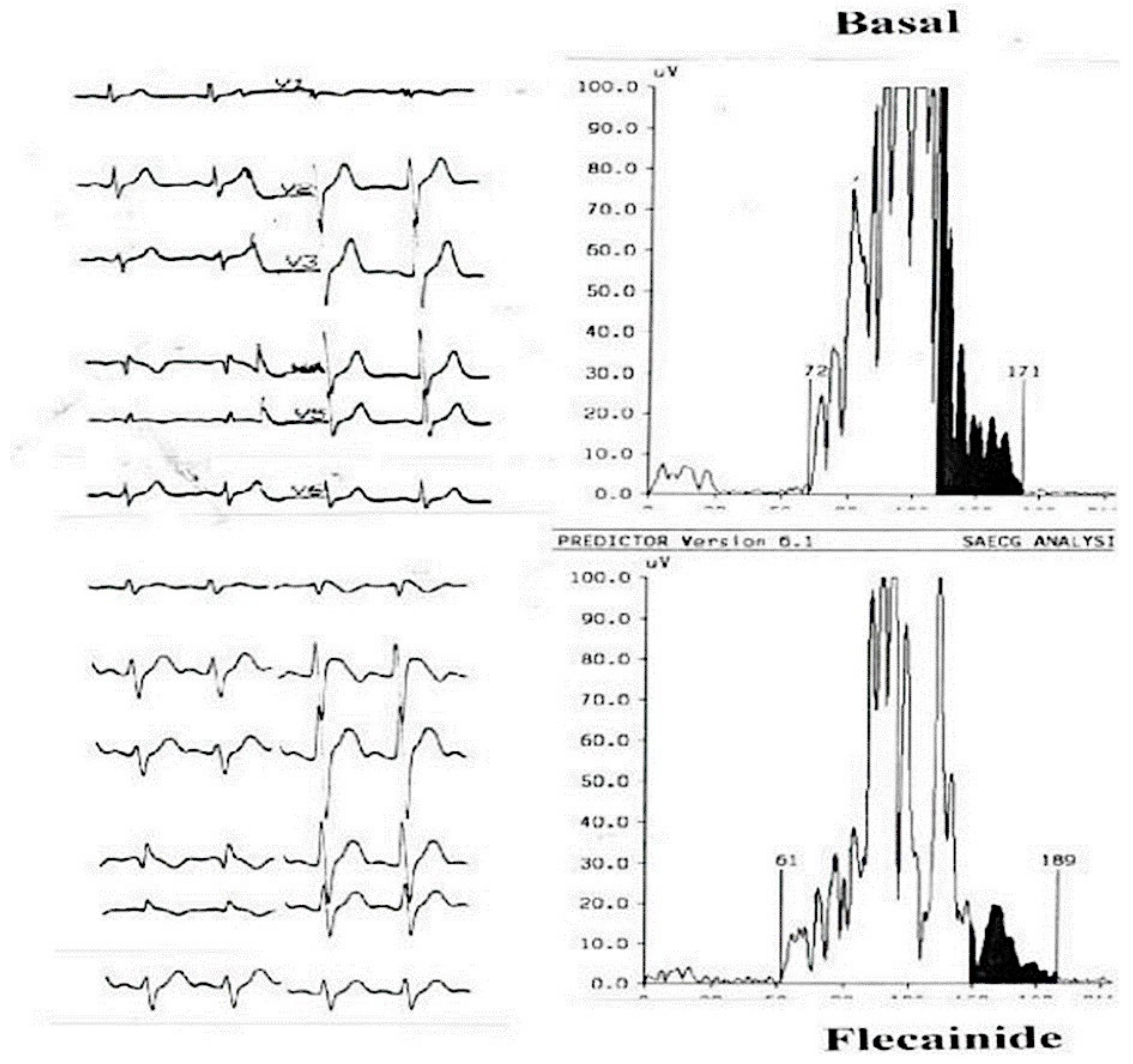