Human Uterus Transplantation from Living and Deceased Donors: The Interim Results of the First 10 Cases of the Czech Trial
Previous Article in Special Issue

Participants and Study Design: This was a cross-sectional study whereby males and females between 4 to 6 years old (n = 59) were recruited from Eastern Illinois. Flyers using age appropriate language were placed in local schools, community centers, and summer camps, as well as online social media groups, and were used to recruit participants. Children were screened prior to participation and were excluded based on several factors, including the presence of attentional and developmental disorders (Attention-Deficit/Hyperactivity Disorder, Autism Spectrum Disorder, Down’s Syndrome), uncorrected vision, and hearing loss. To determine if these criteria were met, parents reported if a physician had diagnosed their child with any of the aforementioned factors. There were 61 children screened, and all were eligible. All participants provided verbal and/or written assent, and their guardians provided written consent before enrollment in the study. All study procedures were approved by the University of Illinois at Urbana Champaign Institutional Review Board (IRB #16484) and conformed to the guidelines of the Declaration of Helsinki. Study procedures took place over three laboratory visits. During visit 1, 61 participants completed informed assent forms and underwent anthropometric and adiposity assessments. Participants completed the self-paced 6MWT. Additionally, parents/guardians completed informed consent and surveys to report the child’s health history as well as family and child demographic information (i.e., age, sex, level of education, household income). Parents were also given 7-day diet records to complete on behalf of the child completing the study and were asked to return them at the second visit. During visit 2, 60 participants completed the pencil and paper-based neuropsychological battery (Woodcock Johnson Early Cognitive and Academic Development Test (ECAD™)) for assessment of general intellectual abilities. A subsample of participants (n = 33) completed a selective attention auditory cognitive task while wearing an electrode cap. This subsample was self-selected in that it consisted of children who tolerated the administration of the EEG cap and completed the task with minimal disruptions to the electrodes. During visit 3, 58 participants completed the modified Eriksen flanker task to assess attentional inhibition. The hearts and flowers task was initially administered during visit 3 (62% of participants); however, due to time constraints on visit 3, the hearts and flowers task was moved to visit 1 (38%) and administered approximately 30 min after the 6MWT.
Although the 6MWT was completed by all 59 children who were enrolled in the study, data may be missing due to participants choosing not to complete some tasks or procedures on the day of testing. Procedures for ECAD™ were completed among 53 participants. Furthermore, 48 and 53 children completed the flanker and the hearts and flowers task, respectively. Diet records were only returned by 55 participants and 53 completed the dual-energy X-ray absorptiometry (DXA) procedure. Lastly, 32 participants completed the auditory oddball task with the electrode cap, whereas usable ERP data was available for 26 participants. A few parents chose not to reveal some demographic information, therefore 51 and 52 participants answered questions regarding race and household income, respectively.

Outcome measures considered for potential covariates included demographic information (i.e., age, sex, race), body mass index (BMI), and adiposity, specifically VAT. Sub-maximal exercise capacity was utilized to estimate cardiorespiratory fitness given that this test is well-tolerated by children as young as 3 years old and has high reliability [38,39]. Furthermore, 6MWT has been shown to be predictive of maximal tests of cardiorespiratory fitness (i.e., VO2max) among adult samples [40,41] and is shown to have validity across key parameters of maximal workload and oxygen uptake during the VO2max test among children [42,43]. The total distance walked was taken from the 6MWT. For the cognitive tasks, accuracy and reaction time were taken for each trial type. Lastly, for the ERP indices, amplitude and latency were measured.

For the subsample with ERP data, participant characteristics are depicted in Table 3. Whereas 32 participants completed the auditory oddball task while wearing the electrode cap, only 26 participants yielded useable data. Participants were excluded if they had fewer than five useable ERP trials (n = 4) or if their ERP data were considered an outlier based on the ±3 standard deviation rule (n = 2). The children who were not included in the subsample were children who refused the cap, who continually touched and manipulated sensors on the cap, or who were unable to remain sufficiently stationery for recording once the cap was placed. Participants’ behavioral performance indicated that children generally understood the task (M target accuracy = 75%). Bivariate correlations between demographic characteristics, fitness measures, and neurocognitive measures were examined. Age and sex were inversely correlated (although sex only moderately so) to the reaction time for target stimuli, with older children and boys responding more quickly to targets. Age was also inversely related to mean amplitude difference for both N2 and P3, suggesting that older children showed less differentiation in their neural responses to standards compared to targets. There were no significant relationships between performance on the 6MWT and the behavioral metrics of the cognitive task.
Subsequent partial correlations were run to investigate the relationships between sub-cardiorespiratory fitness and neuro-cognitive measures while controlling the variance due to age and sex. The partial correlation table is depicted in Table 4. The analysis indicated that when co-varying age and sex, 6MWT distance was moderately related to target reaction time (r = 0.388, p = 0.061) and P3 mean amplitude difference (r = 0.361, p = 0.083). No significant relationships were found between 6MWT performance metrics for the N2 waveform.
As an exploratory secondary analysis, the values for N2 and P3 amplitude and latency for target and standard trials were submitted separately to partial correlation analyses, accounting for variance due to age and sex. This was done to aid in the interpretation of the relationship between fitness and modulation. The results of this analysis showed a moderate negative relationship between 6MWT distance and N2 latency for target trials (r = −0.392, p = 0.058). For P3, there was a moderate positive relationship between distance and P3 amplitude for target trials (r = 0.370, p = 0.075). No other relationships with fitness and ERP indices attained marginal significance (all p’s ≥ 0.10).

This research was funded by the National Dairy Council with partial funding provided by the Department of Kinesiology and Community Health and the Graduate College Fellowship at the University of Illinois at Urbana-Champaign.

The study was conducted according to the guidelines of the Declaration of Helsinki, and approved by the Institutional Review Board (or Ethics Committee) of The University of Illinois at Urbana Champaign (protocol code 16484; 07/20/2016). 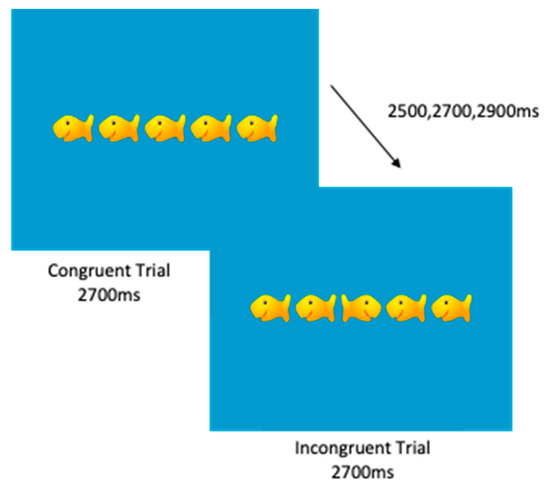 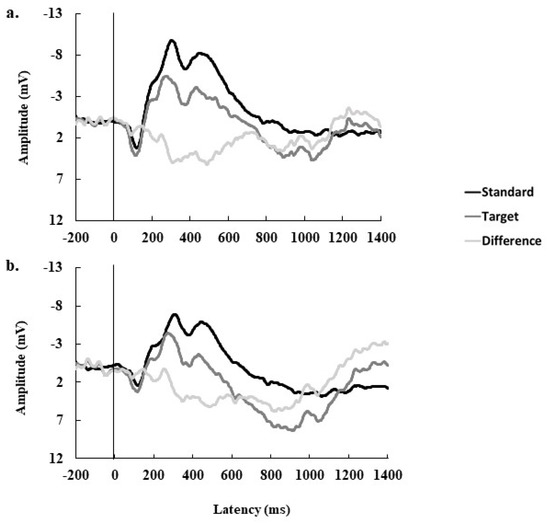 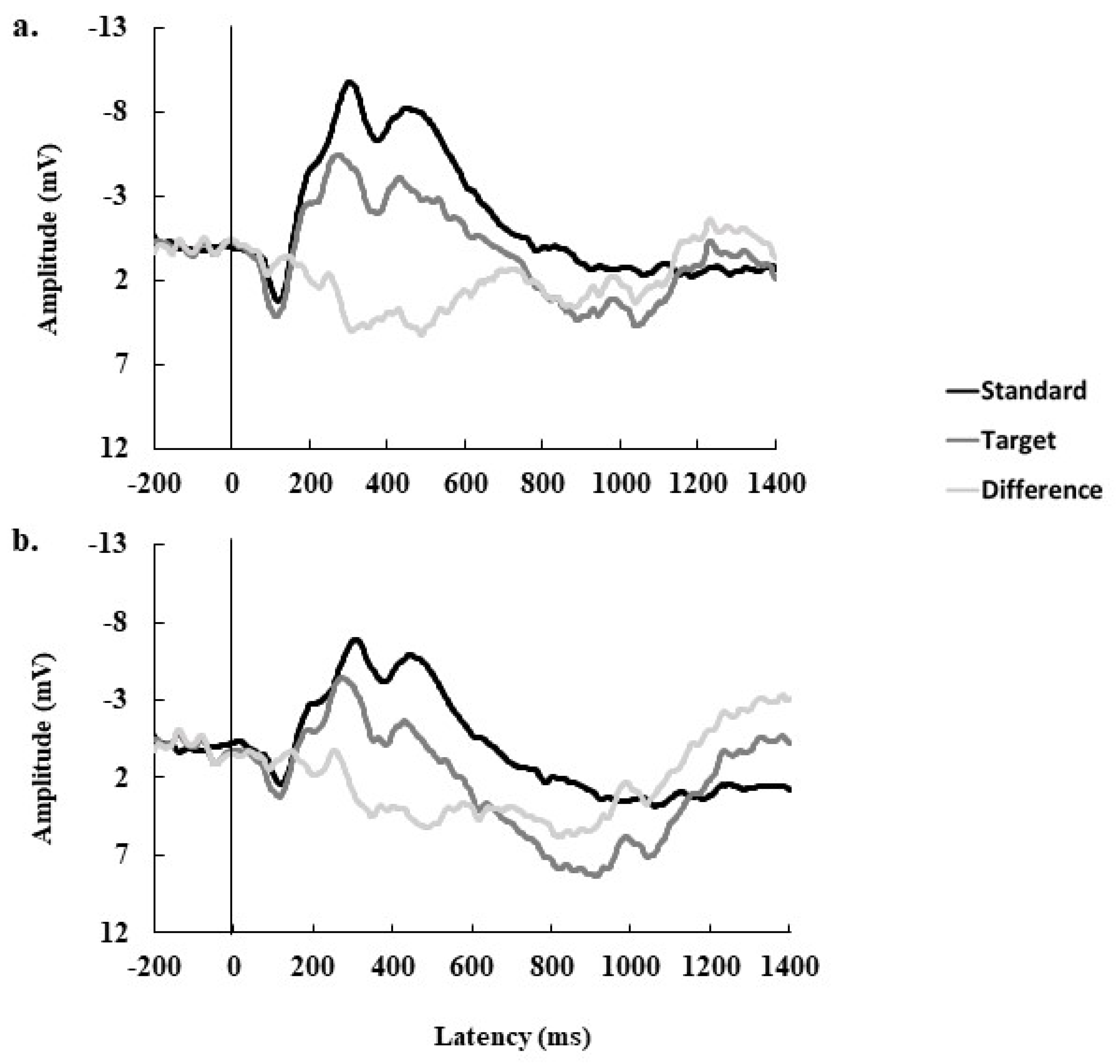