Global Glaucoma Staging System (GGSS): A New Method to Simultaneously Assess the Severity of Both Functional and Structural Damage in Glaucoma
Previous Article in Journal

Increased Risks of Death and Hospitalization in Influenza/Pneumonia and Sepsis for Individuals Affected by Psychotic Disorders, Bipolar Disorders, and Single Manic Episodes: A Retrospective Cross-Sectional Study

Severe mental disorders (SMDs) such as bipolar and psychotic disorders affect an estimated 1–3% of the adult population [1,2]. The life expectancy for individuals with SMD is reduced by approximately 10 to 20 years compared with the general population [3,4]. Studies have shown that most of the reduction in life expectancy seems to be due to somatic comorbidities rather than external events such as suicide or accidents [5,6]. Individuals with SMDs have an elevated risk of prematurely dying from cardiovascular disease, diabetes, and chronic obstructive pulmonary disease. The causes behind this elevated risk are not fully understood. However, some established risk factors such as smoking, substance use, obesity, poor diet, lack of exercise, and hypertension are more common in individuals with SMD [7,8]. There are also concerns regarding inequality in diagnosis and treatment of somatic risk factors and enrolment in primary and secondary prophylactic measures compared with the general population [9]. Individuals with SMDs may thus receive fewer and more delayed medical interventions. They may also be less likely to adhere to prescribed treatments and to seek medical attention for somatic diseases when needed [10,11].
The world remains in the grip of the COVID-19 pandemic [12]. Recent studies have shown that individuals with SMDs are at significantly increased risk of COVID-19-associated death compared with the general population [2,13]. Many of the occurring somatic comorbidities in individuals with SMDs match the identified risk factors for severe COVID-19 infection. Yet, even individuals with SMD without any known risk factors seem to have a threefold increased risk of COVID-19-associated death [2,14]. Some guidelines have now included SMDs as a risk group for COVID-19 [15,16]. Pre-COVID-19 studies, analyzing data from 2003–2009, have indicated that individuals with SMDs have an increased risk of death associated with influenza and pneumonia [5,6,17]. These results have not yet led to individuals with SMDs being prioritized for vaccinations against these respiratory infections [18,19].
Therefore, we set up a population-based study to examine whether individuals with SMDs remain at a higher risk of death and hospitalization due to influenza/pneumonia. The risk of death and hospitalization associated with sepsis was also explored as it is a serious condition with similarities with COVID-19 [20] and there are currently few studies examining sepsis in individuals with SMDs. This way, we intended to update the current evidence base as a decision aid for public health officials. Such information could motivate additional actions and strategies to promote health in these individuals, for example, by inclusion in prioritized groups for vaccination against respiratory infectious pathogens such as influenza and pneumococci. To the best of our knowledge, there are currently few other studies that have examined the risk of death associated with sepsis in general for individuals with SMDs.

Individuals with SMDs were identified from the Swedish National Patient Register, which covers all inpatient care and outpatient specialist care in Sweden [23]. The database includes demographical data and diagnoses coded according to the International Classification of Disease, 10th revision (ICD-10) [24]. Cause-of-death data were retrieved from the Swedish Cause of Death Register. This register includes all deaths among Swedish residents regardless of having occurred in Sweden or abroad [25]. The causes of death are coded according to ICD-10. Medicine prescription data were retrieved from the Swedish Prescribed Drug Register. This register contains information on all prescribed drugs dispensed at Swedish pharmacies, coded according to the Anatomical Therapeutic Chemical (ATC) Classification System [26,27]. Data from the registers were linked using the unique personal identification number assigned to all Swedish citizens at birth or immigration.

Every person in the Swedish population aged 20 years by 31 December 2017 was included. Individuals with SMD were defined as cases; individuals without SMD, i.e., the rest of the population, were defined as controls. Inclusion from the age of 20 years was chosen to enable stratification in 10-year intervals; the number of outcomes in the age range between 18 and 20 years was also assumed to be negligible.

The main exposure was SMD, defined as a recurrent diagnosis of either any psychotic disorder (ICD-10 codes F20, F22, and F25) or bipolar disorders/single manic episodes (ICD-10 codes F30 and F31), on at least two separate occasions between 1998 and 2017. The decision to combine psychotic and bipolar disorders into a single category was to ensure a sufficient sample size and to enable comparison with previous Swedish register studies [2,5,6]. Somatic comorbidities were examined in terms of diabetes, hypertension, cardiovascular disease, and chronic respiratory diseases. The comorbidities were included if registered within a five-year interval before the outcomes, i.e., between 1 January 2013 and 31 December 2017, to increase the chance of being currently existent. The comorbidities were chosen for being (a) known as associated with SMDs, (b) sufficiently prevalent to yield statistical power, and (c) of potential etiological significance for the outcomes.
To identify individuals with the chosen somatic comorbidities, ATC codes registered in the Swedish Prescribed Drug Register were used in addition to ICD-10 codes. This was done as these diagnoses were generally monitored by primary care and thus not with full certainty included in the Swedish National Patient Register. The following ICD-10 and ATC codes were used; diabetes ICD E10-14, ATC A10; hypertension ICD-10 I10.9, I11-13, I15. ATC C02, C03, C07AB02, C08CA, C09; cardiovascular disease ICD-10 I20-25, I48, I50, I61, I64.9, I69.1, I69.3, I69.4, I69.8, I70; and chronic respiratory diseases ICD-10 J40-47, J60-67, J68.4, J70.1, J70.3, J96.1, J96.8, E84.0. Individuals were categorized as either “with a least one known comorbidity” or “without any known comorbidity”. Age was stratified into 10-year or 20-year intervals, i.e., 20–39, 40–59, 60–69, 70–79, and 80+ years.

All data were linked, anonymized, and summarized by the Swedish National Board of Health and Welfare, who also performed an initial statistical assessment by tabulating the data into stratified age groups and categories of comorbidity. Odds ratios (ORs), 95% confidence intervals (CIs), and p-values were then calculated from the anonymized and tabulated data using Microsoft Excel [28,29]. As only summarized, but not individualized data were available for confidentiality reasons, age groups and comorbidities were only considered separately. Combinations of comorbidities and age groups were not possible with the available data set. In the age group of 20–39 years, small numbers of outcomes were withheld for confidentiality reasons. This missing data were set to 0 in the statistical analysis.

3.2. Death and Hospitalization Associated with Influenza/Pneumonia

3.3. Death and Hospitalization Associated with Sepsis

Compared with the general population, individuals with SMDs have increased risks of death and hospitalization associated with both influenza/pneumonia and sepsis, even without known somatic comorbidities. Our findings identify a need for further evaluation of whether these individuals should be included in prioritized groups for vaccination against infections other than COVID-19.

This study was approved by the Swedish Ethical Review Authority (DNR 2020-02759) and was performed according to the Strengthening the Reporting of Observational Studies in Epidemiology (STROBE) criteria.

Informed consent was not required as the study was solely register-based [21].

The raw data supporting the conclusions of this study are available on request from the corresponding author.

U.W. has received funding for educational activities on behalf of Norrbotten Region (Masterclass Psychiatry Programme 2014–2018 and EAPM 2016, Luleå, Sweden): Astra Zeneca, Eli Lilly, Janssen, Novartis, Otsuka/Lundbeck, Servier, Shire, and Sunovion. U.W. has received lecture honoraria from Lundbeck and is scheduled to deliver further lectures for Lundbeck and Otsuka, receiving honoraria for these activities. All other authors declare no competing interests. 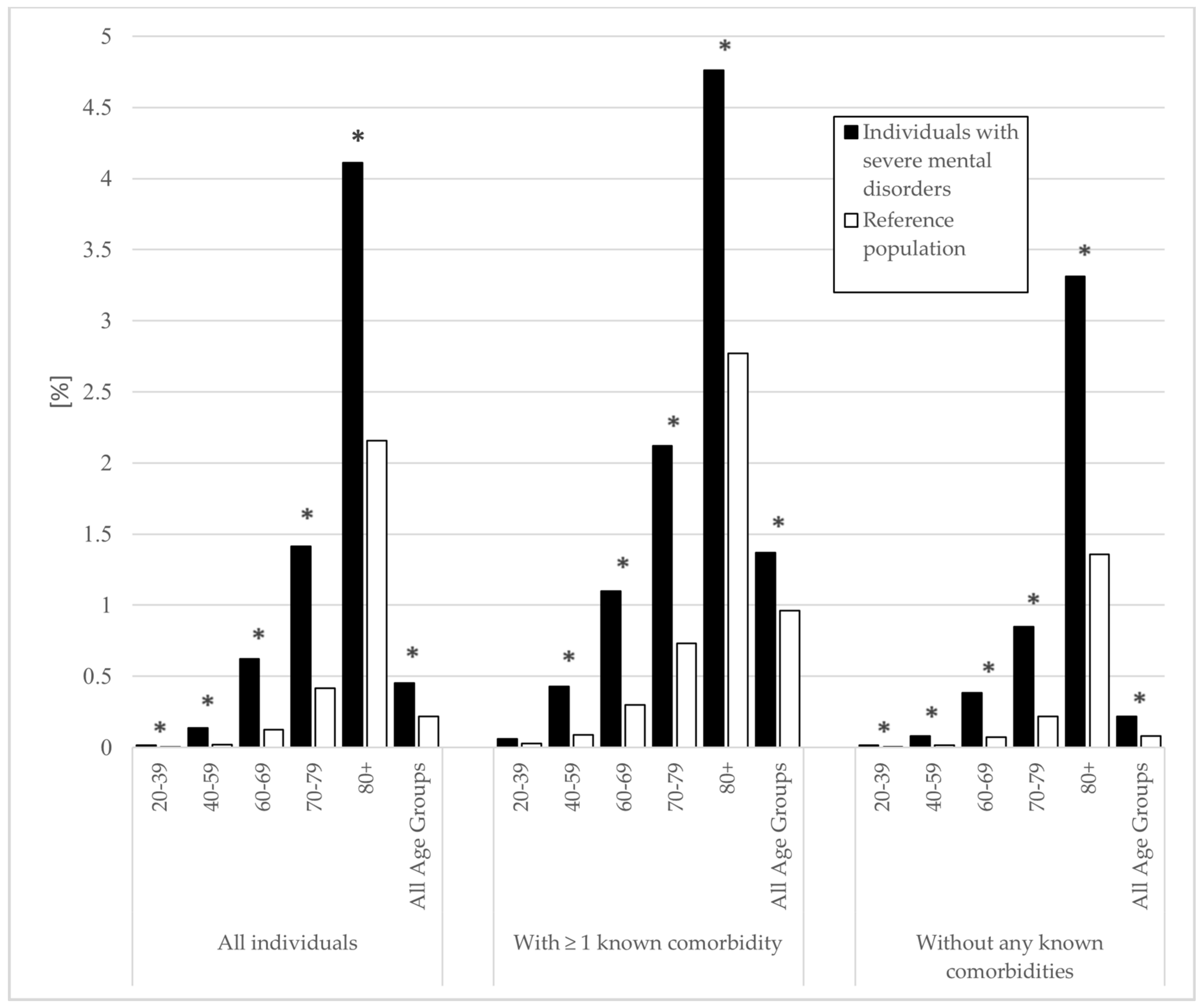