Hearing Aid Fitting in Tinnitus: A Scoping Review of Methodological Aspects and Effect on Tinnitus Distress and Perception

The Influence of Depression, Anxiety and Cognition on the Treatment Effects of Ginkgo biloba Extract EGb 761® in Patients with Tinnitus and Dementia: A Mediation Analysis

Background: Comorbid occurrence of tinnitus and emotional symptoms of anxiety and depression is highly prevalent. The Ginkgo biloba extract EGb 761® has been shown to be effective in reducing neuropsychiatric symptoms in patients with dementia and tinnitus. Methods: We performed a mediation analysis to evaluate direct effects of EGb 761® on tinnitus severity, as well as indirect effects mediated by symptoms of depression and anxiety and by changed cognition. We pooled data from subsets of patients suffering from tinnitus that were enrolled in three double-blind, randomized, placebo-controlled clinical trials, which investigated the efficacy of EGb 761® (240 mg/day for 22–24 weeks) in dementia with concomitant neuropsychiatric symptoms. Results: In total, 594 patients suffered from tinnitus (EGb 761®, 289; placebo, 305). Direct effects of EGb 761® on tinnitus severity (p < 0.001) in patients with mild to moderate dementia were found to represent about 60% of the total effect, whereas the indirect effects (p < 0.001) mediated by improvement of anxiety, depression and cognition represented about 40% of the total effect. Conclusions: EGb 761® could be considered as a supporting treatment for tinnitus in elderly patients suffering from dementia, with added benefit in those with symptoms of depression or anxiety. View Full-Text
Keywords: tinnitus; dementia; depression; anxiety; Ginkgo biloba; EGb 761; mediation analysis tinnitus; dementia; depression; anxiety; Ginkgo biloba; EGb 761; mediation analysis
►▼ Show Figures 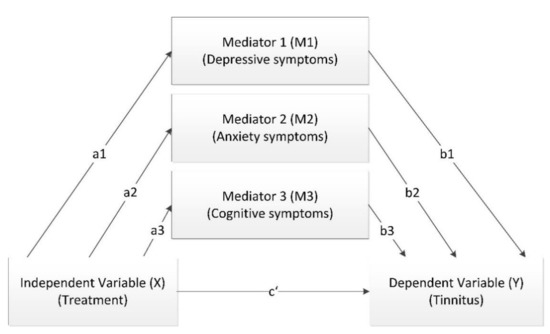 
Brüggemann P, Sória MG, Brandes-Schramm J, Mazurek B. The Influence of Depression, Anxiety and Cognition on the Treatment Effects of Ginkgo biloba Extract EGb 761® in Patients with Tinnitus and Dementia: A Mediation Analysis. Journal of Clinical Medicine. 2021; 10(14):3151. https://doi.org/10.3390/jcm10143151


Brüggemann, Petra, Marília G. Sória, Juliette Brandes-Schramm, and Birgit Mazurek. 2021. "The Influence of Depression, Anxiety and Cognition on the Treatment Effects of Ginkgo biloba Extract EGb 761® in Patients with Tinnitus and Dementia: A Mediation Analysis" Journal of Clinical Medicine 10, no. 14: 3151. https://doi.org/10.3390/jcm10143151