Water Transport and Ion Diffusion Investigation of an Amphotericin B-Based Channel Applied to Forward Osmosis: A Simulation Study
Next Article in Special Issue

The development and adoption of cell therapies has been largely limited by difficulties associated with their safety, handling, and storage. Extracellular vesicles (EV) have recently emerged as a likely mediator for the therapeutic effect of cells, offering several advantages over cell therapies. Due to their small size and inability to expand and metastasize, EV are generally considered safer than cell transplantation. Nevertheless, few studies have scrutinized the toxicity profile of EV, particularly after repeated high-dose administration. The present study aimed to evaluate a preparation of small EV obtained from umbilical cord blood mononuclear cells (UCB-MNC-sEV) for its cytotoxicity in different cell lines, as well as its differential accumulation, distribution, and toxicity following repeated intravenous (IV) administrations in a rodent model. In vitro, repeated sEV exposure in concentrations up to 1 × 1011 particles/mL had no deleterious impact on the viability or metabolic activity of peripheral blood mononuclear cells, THP-1 monocytes, THP-1-derived macrophages, normal dermal human fibroblasts, or human umbilical vein endothelial cells. DiR-labelled sEV, injected intravenously for four weeks in healthy rats, were detected in clearance organs, particularly the kidneys, spleen, and liver, similarly to control dye. Moreover, repeated administrations for six and twelve weeks of up to 1 × 1010 total particles of sEV dye were well-tolerated, with no changes in general haematological cell counts, or kidney and liver toxicity markers. More importantly, unlabelled sEV likewise did not induce significant alterations in cellular and biochemical blood parameters, nor any morphological changes in the heart, kidney, lung, spleen, or liver tissue. In sum, our data show that UCB-MNC-sEV have no significant toxicity in vitro or in vivo, even when administered repeatedly at high concentrations, therefore confirming their safety profile and potential suitability for future clinical use. View Full-Text
Keywords: extracellular vesicles; umbilical cord blood; EV therapeutics; EV toxicity extracellular vesicles; umbilical cord blood; EV therapeutics; EV toxicity
►▼ Show Figures 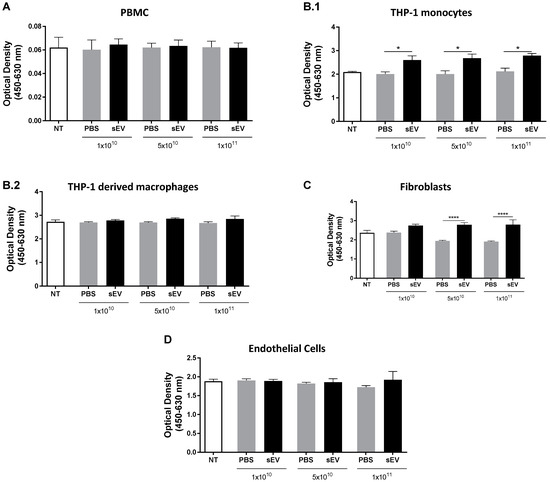