A schematic diagram of the SBMED is illustrated in Figure 2. Especially, this experimental setup was comprised of (1) a cathode and an anode, which were made of titanium coated with ruthenium; (2) alternatively arranged bipolar membrane, MSAEM, anion-exchange membrane, cation-exchange membrane and bipolar membrane; the effective area of each membrane was 20 cm2 and the spacer thickness was 10 mm; (3) two electrodes that were connected to a direct current power supply (WYL1703, Hangzhou Siling Electrical Instrument Ltd., Hangzhou, China); the electrode was purchased from Baoji Qixin Titanium Co. Ltd., Baoji, China; the voltage drop across the stack was directly read from the indicator on the power supply; (4) five circulation compartments, namely an acid I chamber, acid II chamber, salt chamber, base chamber and electrode chamber were formed; and (5) peristaltic pumps (BT-100 L, Baoding Lead Fluid Technology Co., Ltd., Baoding, China) which were used to circulate the solutions with a flow rate of 200 mL/min. The conductivity was measured by a DDBJ-350 conductivity meter (Shanghai Leici Equipment Co. Ltd., Shanghai, China).
Three kinds of mixed salt aqueous solutions, including 0.05 mol/L NaCl + 0.05 mol/L Na2SO4, 0.06 mol/L NaCl + 0.04 mol/L Na2SO4 and 0.08 mol/L NaCl + 0.02 mol/L Na2SO4, with the volume of 1 L, were fed into the salt compartment. To increase the initial solution conductivity, the acid I compartment and base compartment were fed with 0.05 mol/L HCl and 0.05 mol/L NaOH, with each volume of 200 mL, respectively. The acid II compartment was filled with 200 mL of deionized water. The anode and cathode compartments were circulated together with a 0.3 mol/L Na2SO4 (200 mL) as the rinse solution. The SBMED experiments were conducted at the galvanostatic mode with the current density in the range of 10–50 mA/cm2 and the voltages were directly recorded from the board of the DC power supply.

2.3. Operating Principle of the SBMED

The above section has proved that the increase in the molar ratio of the monovalent to divalent component was beneficial for the final monoprotic acid purity. For seawater or brackish water desalination, the recovery rate of reverse osmosis for seawater or brackish water desalination is usually around 60%: a large amount of concentrate RO brines are discharged without reuse. The composition of these brines is very similar to that of seawater, which contains both monovalent and divalent anions. To further broaden the applicability of this integrated method, we also tested the application in situ of the combination of bipolar membrane electrodialysis with the monovalent ion selective anion-exchange membrane for the valorization of simulated seawater. Therefore, a simulated seawater with a Cl− concentration of 0.546 mol/L and SO42− concentration of 0.0281 mol/L was further investigated for the SBMED process. Figure 8 shows the SBMED performances with the simulated seawater. The voltage drop across the stack decreased as a function of time, indicating the smooth progress of the experiment. The acid and base concentrations linearly increased as a function of time. The final base and acid concentrations were around 0.30–0.35 mol/L after five hours of running. Notably, stable and relatively high purities of monoprotic acid in the range of 93.9–96.1% were obtained via this novel SBMED configuration. Compared with the conventional BMED stack that only obtains mixed acids, this SBMED was feasible to valorize the mixed salts into relatively high-purity monoprotic and diprotic acids in one step. The purities of the target monoprotic and diprotic acids were highly dependent on the perm-selectivity of the MSAEM. 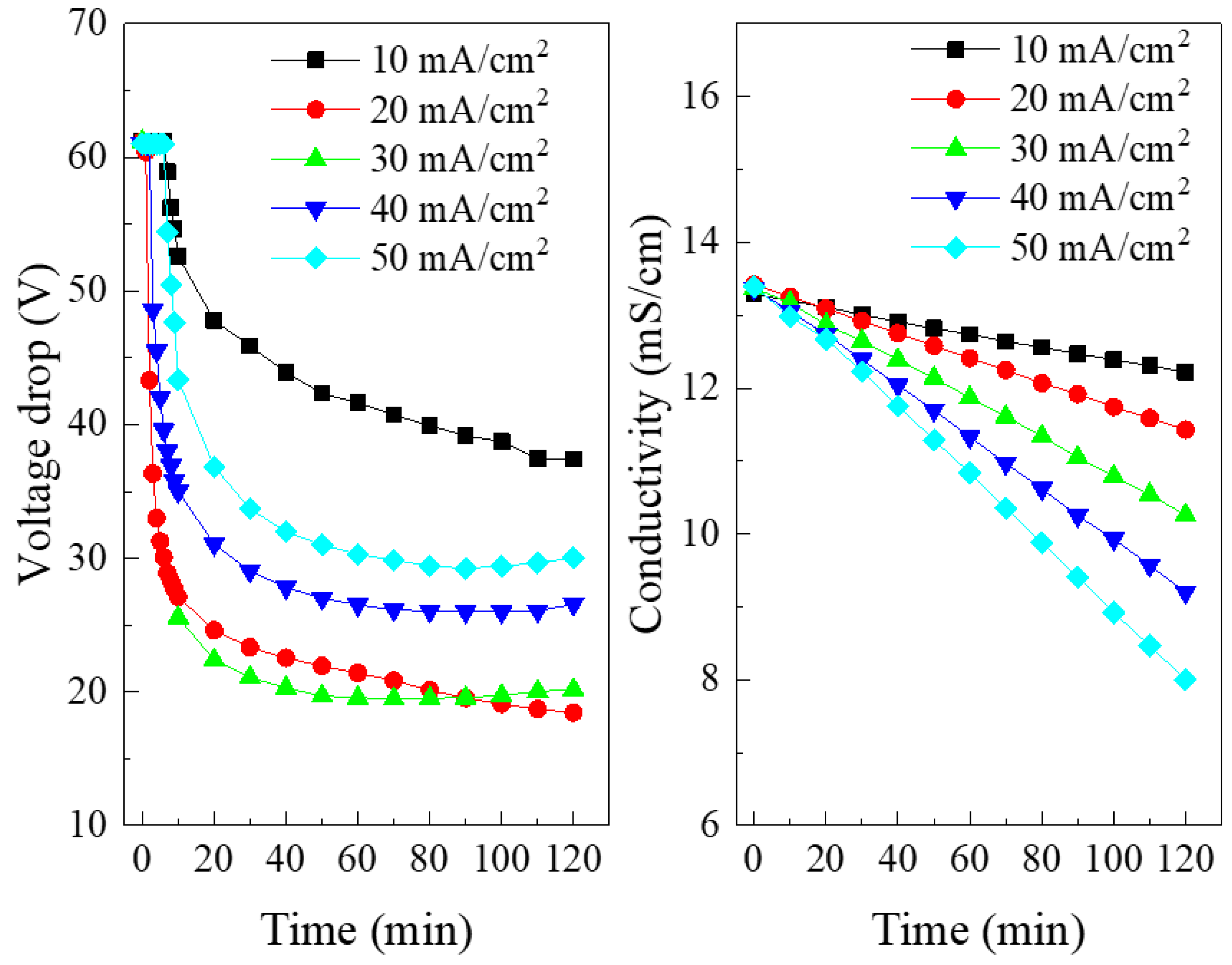 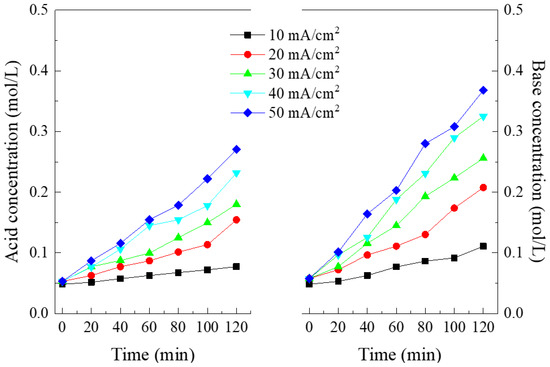 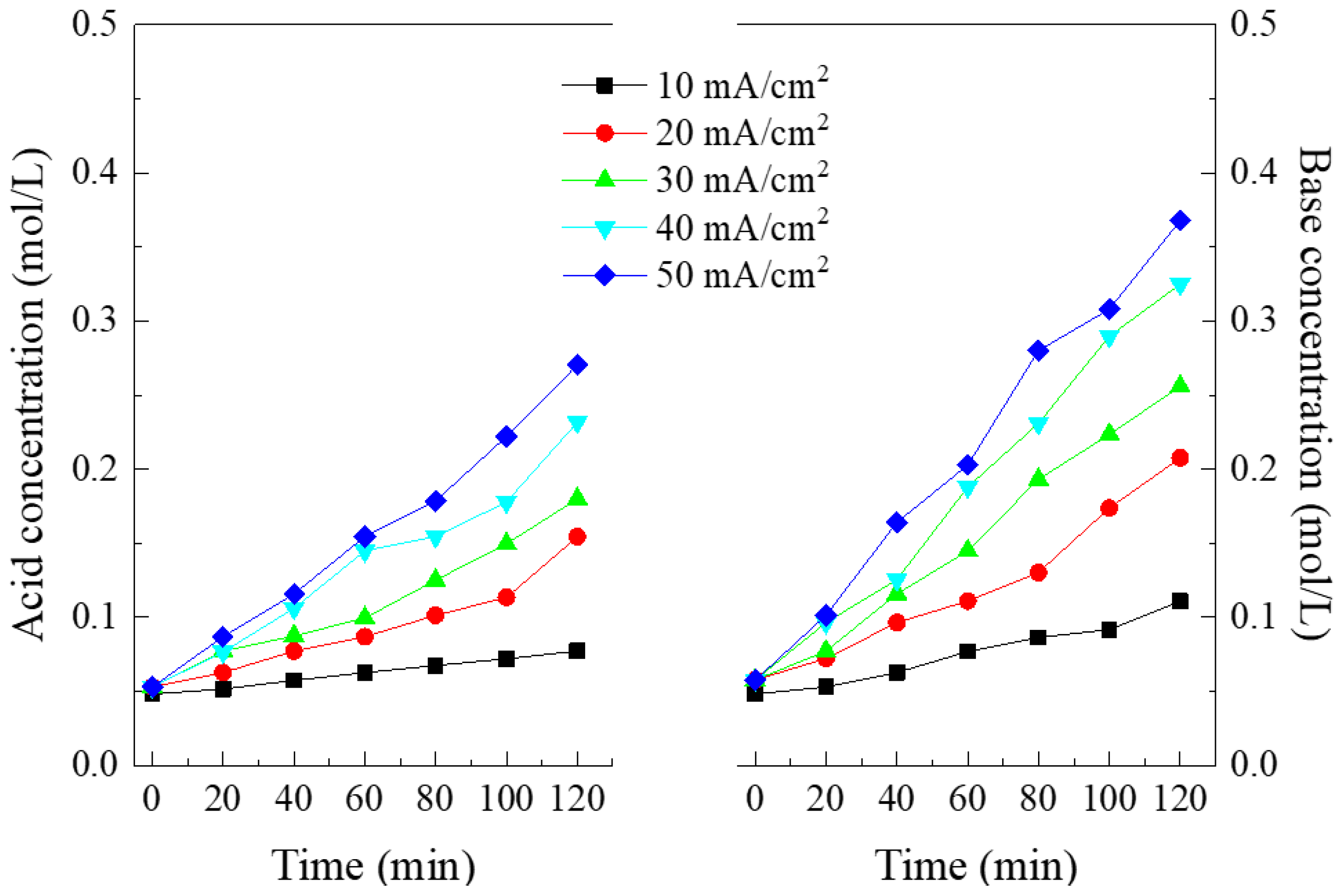 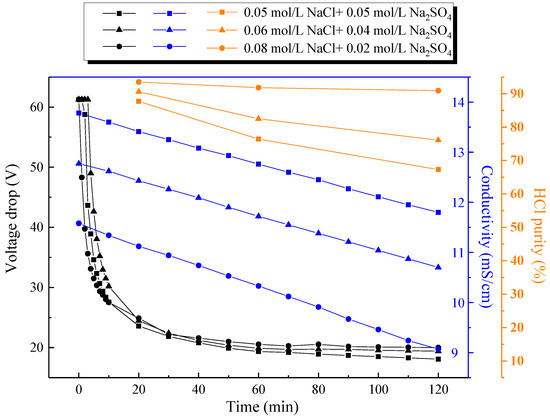 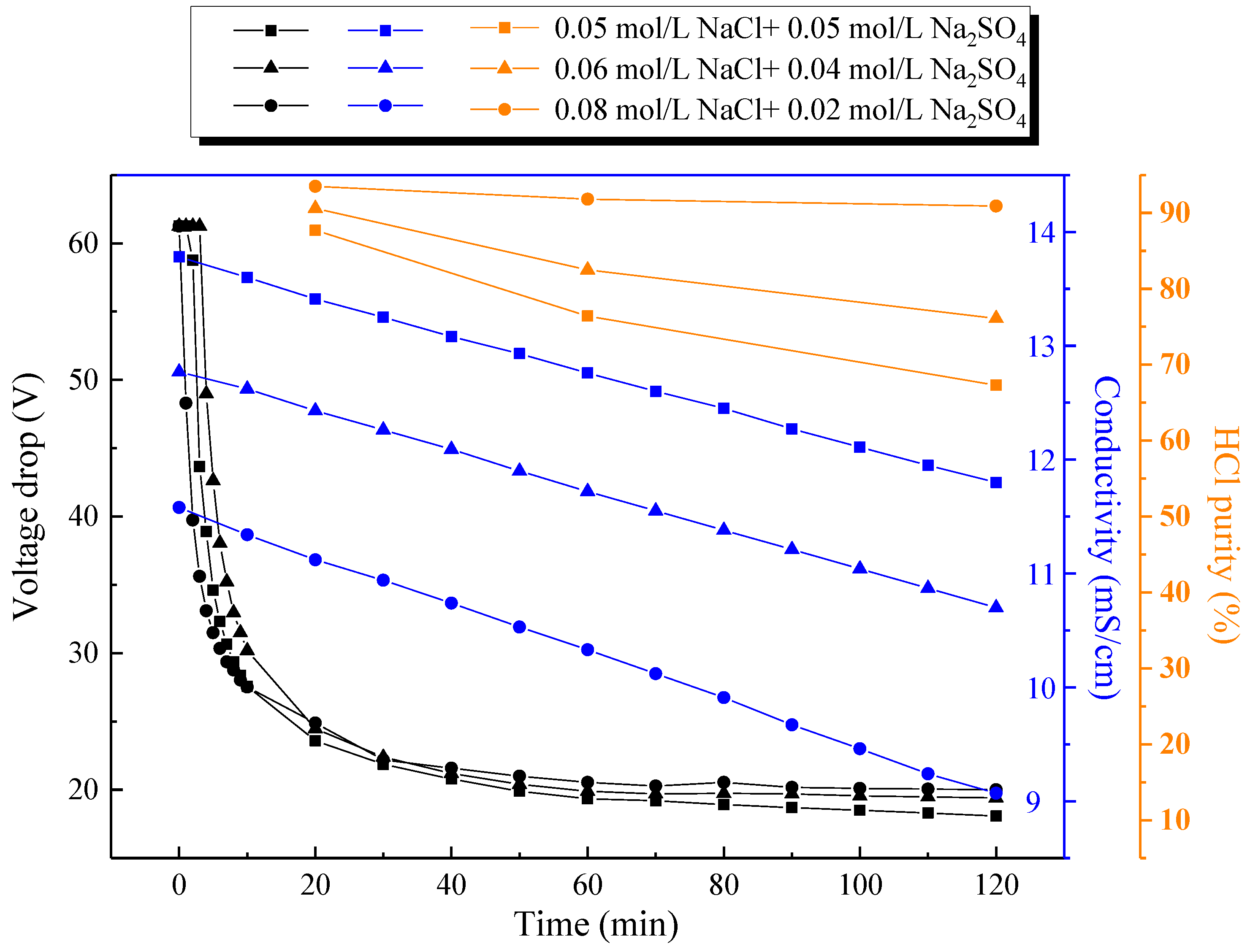 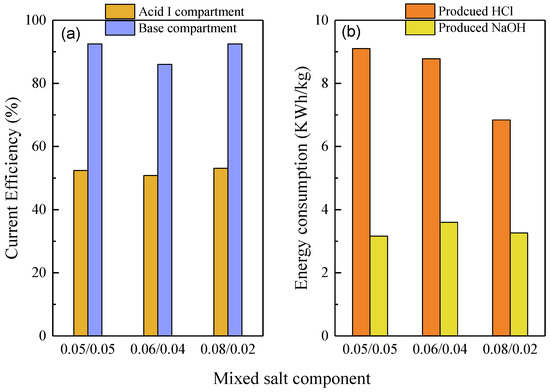 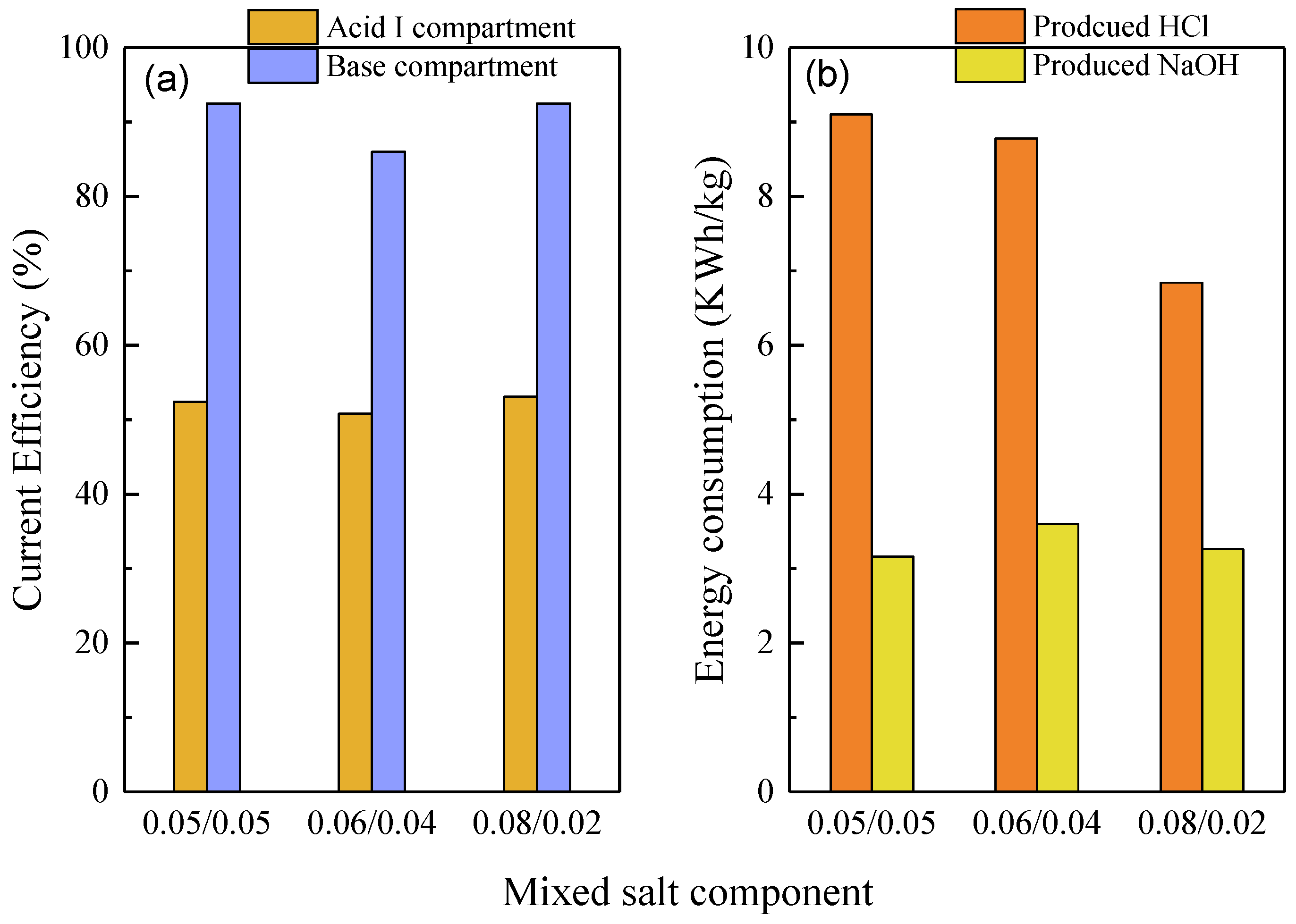