Intention to Receive the COVID-19 Vaccination in China: Application of the Diffusion of Innovations Theory and the Moderating Role of Openness to Experience

Prior results investigating a correlation between obesity and hepatitis A virus (HAV) vaccine response have been inconclusive, with limited data involving live attenuated HAV vaccines. The aim of this study is to evaluate the effect of overweight and obesity on the response to live attenuated HAV vaccine in children and young adults. This prospective cohort study was conducted in Thailand with subjects ranging in age from seven to twenty-five years. The subjects were administered 0.5 mL of MEVAC™-A and tested for anti-HAV antibodies before and at 8–9 weeks after vaccination. Baseline seronegative subjects (anti-HAV antibodies < 20 mIU/mL) were divided into non-obese (underweight/normal weight) and obese (overweight/obesity/severe obesity) groups. A total of 212 (117 non-obese and 95 obese) subjects completed the study (mean age (SD) = 13.95 (3.90) years). The seroprotection rates were 100%. Postvaccination geometric mean titers (95% CI) were 429.51 (401.97, 458.94) and 467.45 (424.47, 514.79) mIU/mL in the non-obese and obese groups, respectively. Females (p = 0.013) and subjects with truncal obesity (p = 0.002) had significantly higher titers than other participants. Live attenuated HAV vaccine is safe and has comparably high immunogenicity in both underweight/normal weight and overweight/obese persons.
Keywords: hepatitis A; obesity; overweight; immunogenicity; vaccine hepatitis A; obesity; overweight; immunogenicity; vaccine

Childhood obesity is one of the most serious worldwide health concerns in the twenty-first century and its prevalence has increased at an alarming rate. The prevalence of obesity in Thailand is one of the highest in Asia [1]. In 2011, the National Thai Food Consumption Survey examined the prevalence of overweight and obesity in a nationally representative sample of Thai children and adults [2]. Among children and adolescents aged three to eighteen years, the prevalence of overweight and obesity were 9.1% and 6.5%, respectively. Using the World Health Organization (WHO) standard for Asian populations, the combined prevalence of overweight and obesity in Thai adults aged nineteen years and over was 23.9%.
Overweight and obese children are likely to stay obese into adulthood. In addition, they are more likely to develop noncommunicable diseases such as non-alcoholic fatty liver disease, diabetes, and cardiovascular disease at a younger age. Alarmingly, obesity is characterized by a low-level systemic inflammation that might lead to a reduction in immune system responsiveness to vaccines [3,4,5,6]. In research involving hepatitis B virus (HBV) vaccine, several studies showed that obesity was a risk factor for vaccine non-responsiveness [7,8,9]. In contrast, results in studies involving killed hepatitis A virus (HAV) vaccine were inconclusive. Reuman et al. [10] and Van der Wielen et al. [11] argued that a higher vaccine response was associated with lower body mass index (BMI) and lower weight. Yet, Lim et al. [12] demonstrated that obesity did not significantly affect immunogenicity. Currently, there is no data focused on live HAV vaccines.
WHO recommends that any vaccination against HAV be integrated into the national immunization schedule for children aged ≥1 year [13,14]. Both inactivated and live attenuated HAV vaccines are highly immunogenic, generating long-lasting protection against HAV in children and adults. Presently, there is a trend to use the live HAV vaccine variant because it involves a single dose. In 2014, the Indian Academy of Pediatrics (IAP) updated their recommendations for live attenuated HAV vaccine in favor of the single dose variant as opposed to the previous two-dose schedule [15].
Because of the limited amount of immunogenicity data for live attenuated HAV vaccine in obese populations, the primary objective of our study was to evaluate the effects of overweight and obesity on the immune response to live attenuated HAV vaccine in children and young adults. Secondary objectives included identifying potential factors associated with postvaccination anti-HAV titers and assessing the reactogenicity of live attenuated HAV vaccine in non-obese and obese vaccine recipients.

This was a prospective cohort study conducted between November 2019 and February 2020. All subjects were aged seven to twenty-five years and recruited from two primary schools, one secondary school, one university in Bangkok and the outpatient obesity clinic of King Chulalongkorn Memorial Hospital (KCMH). Written informed consent was obtained from each participant aged 18 years or older or from the parent of any participant younger than 18 years. Written informed assent was also obtained from each participant aged seven to eighteen years. Participants who had underlying immunodeficiency diseases, were previously immunized with an HAV vaccine, or had a seropositive (anti-HAV ≥ 20 mIU/mL) blood sample were excluded from study analysis.

Standard, calibrated scales and stadiometers were used to determine height, weight, waist circumference, and body mass index (BMI = weight (kg)/height (m)2). Participants were classified as underweight, normal weight, overweight, obese, and severely obese according to their BMI using the WHO Child Growth Standards for participants aged seven to eighteen years and the WHO standards for Asian populations for participants aged nineteen years and older [16,17,18] (Supplement Table S1). Participants were then divided into two subgroups for study analysis, i.e., Group 1: Non-obese group, comprised of underweight or normal weight subjects; and Group 2: Obese group, comprised of overweight, obese or severely obese subjects.
Cutoff points for waist circumference (WC), as defined by International Diabetes Federation criteria with adjustments for Asian populations [19,20,21], were used to determine truncal obesity in this study.
The study was conducted in accordance with ICMR guidelines for biomedical research on human subjects and the Declaration of Helsinki. This study was registered in the Thai Clinical Trials Registry (TCTR) (ID number TCTR20191230001).

The enrolled subjects were vaccinated (subcutaneous over the deltoid muscle of the upper arm) with 0.5 mL of MEVAC™-A. The MEVAC™-A (H2 strain, freeze dried, live) vaccine was developed by Zhejiang Pukang Biotechnology Co, Ltd., People’s Republic of China.

2.2.1. Assessment of Immunogenicity and Serological Assay

Blood samples, measuring the levels of anti-HAV antibodies, were taken from each subject one day before the study vaccination and 8–9 weeks after the vaccination day. Based on earlier studies, an anti-HAV IgG titer of ≥20 mIU/mL was considered seroprotective [22].
Anti-HAV titer was determined by electrochemiluminescence immunoassay (ECLIA) on a cobas e 801 immunoassay analyzer according to the manufacturer’s instructions (Roche Diagnostics, Mannheim, Germany). Summary statistics for HAV-antibody concentrations from the immunoassay analyzer were used to calculate the geometric mean titers (GMTs).

Vaccine safety was assessed on the basis of observed or reported adverse events (AEs). Every vaccinated subject was observed closely at the study site for one hour postvaccination, with follow-up telephone calls using a standardized questionnaire at 3 days (72 h) after study vaccination to gauge local/systemic reactions. Information on any serious AEs, reported by the vaccinees through the end of the study, was also collected.

Multiple linear regression (MLR) was used to assess the association between obesity and logarithm base 10 HAV-antibody titer and to identify any factors associated with the HAV-antibody titer. The minimum sample size was estimated using the “50 + 8 m” formula proposed by Tabachnick and Fidell [23], where “m” is the number of factors. Initially, five to six factors associated with HAV-antibody titer were expected following vaccination. As a result, the minimum number of subjects for the study was set at 98. Based on suggestion by Siddiqui [24], the sample size of 200 is fairly sufficient for multivariate analysis. Adjusting for a dropout rate of 15%, a total sample size of 230 subjects was targeted in order to have at least 200 subjects for the study analysis.
Statistical analysis was performed using STATA 15.1 (StataCorp, College Station, TX, USA). Categorical data were expressed as a number and percentage. Continuous data were given as the mean with standard deviation (SD), whereas GMT values were expressed as the mean with 95% confidence interval (95% CI). Comparisons between two groups were analyzed using the student t-test or Mann-Whitney U test for continuous data and the Chi-square or Fisher’s exact tests for categorical data. Associations between factors (e.g., obesity group, baseline titer, gender, age, truncal obesity, and acanthosis nigricans) were analyzed by simple and multiple linear regression using the backward stepwise elimination method. p-values less than 0.05 were considered to be statistically significant.

The time from vaccination to anti-HAV titer measurement, given as mean ± SD, was 8.47 ± 0.48 weeks (8.50 ± 0.46 weeks for the non-obese group and 8.43 ± 0.51 weeks for the obese group, p = 0.310). Overall postvaccination anti-HAV GMT (95% CI) was 446.11 (421.64, 472.01) mIU/mL. All non-obese and obese subjects (100%) were seroprotected after a single dose of live vaccine. The postvaccination anti-HAV GMTs (95% CI) for the non-obese and obese groups were 429.51 (401.97, 458.94) and 467.45 (424.47, 514.79) mIU/mL, respectively (p = 0.142) (Supplement Table S2).
Both simple regression and MLR analyses on the postvaccination log 10 anti-HAV results (Table 2) showed no significant differences in the anti-HAV titers between the non-obese and obese groups. In addition, simple regression and MLR analyses of the log 10 anti-HAV titer after vaccination showed no difference in the titers between children (≤18 years) and adults (>18 years). However, significantly higher antibody titer responses at 8–9 weeks after vaccination were found for female subjects (MLR p-value: 0.013) and subjects with truncal obesity (MLR p-value: 0.002).
Additional exploratory analyses to determine the effect of different influencing factors (e.g., baseline GMT, truncal obesity, sex, age group, grading of obesity (overweight, obesity, and severe obesity) and acanthosis nigricans) on the GMT values for anti-HAV in the obese group (n = 95) were performed by MLR analysis using the backward stepwise elimination method on log 10 anti-HAV values. The results show that the postvaccination anti-HAV titer was influenced by truncal obesity only (Table 3).

In the 72-h postvaccination observation period, two out of 236 vaccinees did not respond to the postvaccination phone call. From the remaining 234 respondents, a total of 106 adverse events were reported. The most common adverse events were myalgia (reported by 15.38% of respondents or 36 vaccinees), headache (12.82%), fever (11.11%), swelling and pain at the injection site (4.27%), and abdominal discomfort (1.71%) (Table 4). Neither serious AEs nor requiring hospitalization were observed during the study. There were no differences in the rates of adverse events between the non-obese and obese groups.

A single vaccination using the live attenuated hepatitis A vaccine is safe and highly immunogenic in both underweight/normal weight and overweight/obese subjects during the short-term follow-up. Truncal obesity and female gender are factors associated with better immune response, whereas there are no differences in anti-HAV titers between non-obese versus obese groups or between children versus young adults.

The study was conducted according to the guidelines of the Declaration of Helsinki, and approved by the Institutional Review Board of the Faculty of Medicine at Chulalongkorn University (certificate of approval no. 1662/2019, date of approval 5 September 2019).

Informed consent was obtained from all subjects and/or their caregivers involved in the study.

The authors would like to thank Apiradee Theamboonlers for providing comments.

The authors declare no conflict of interest. Biogenetech Co Ltd had no role in the design of the study; in the collection, analyses, or interpretation of data; in the writing of the manuscript, or in the decision to publish the results”. 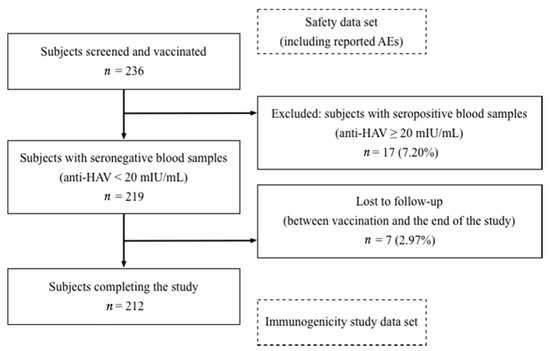 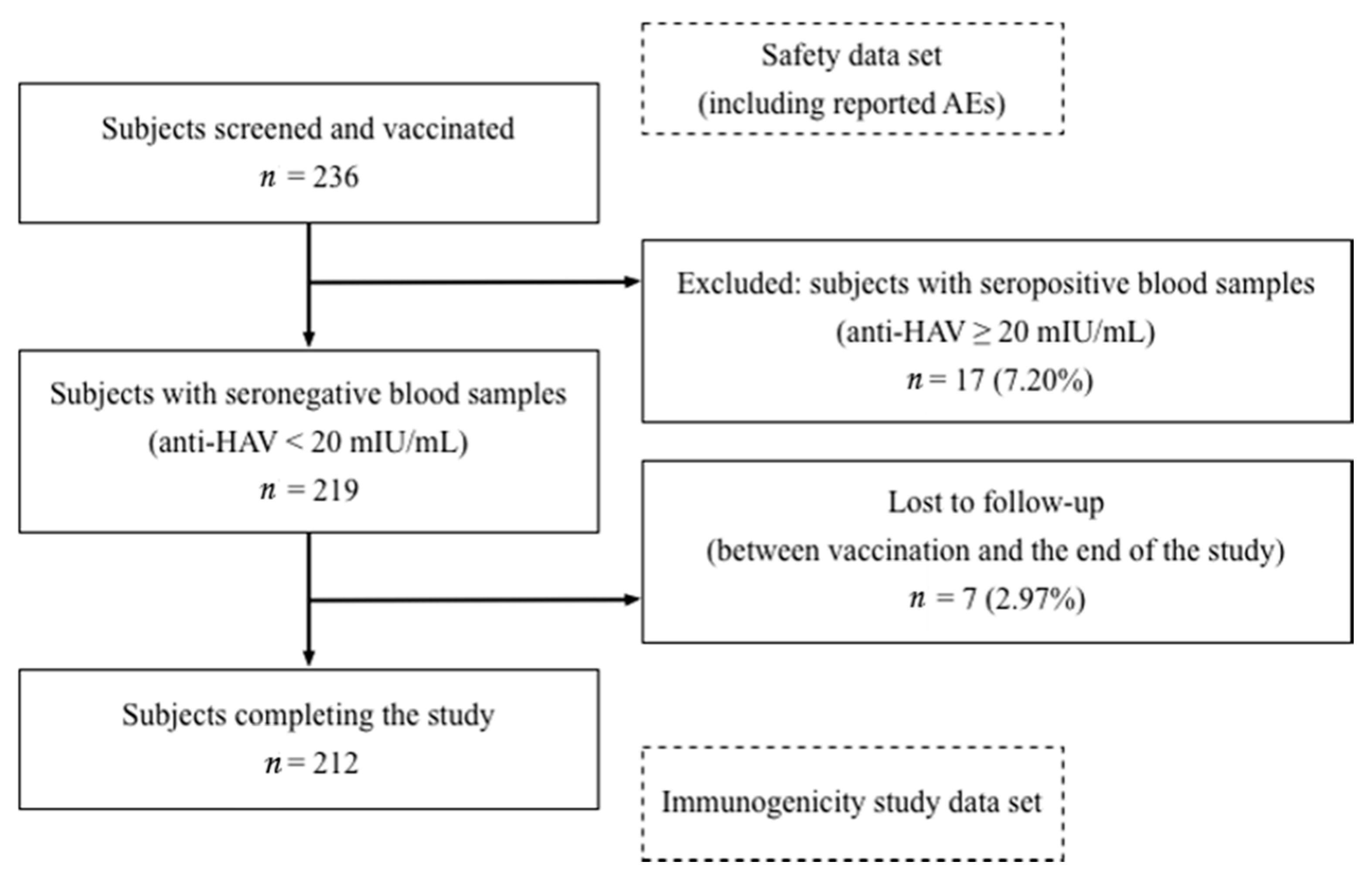 Table 4. List of adverse events observed within 72 h postvaccination.
Table 4. List of adverse events observed within 72 h postvaccination.
* 2 out of 236 vaccinees did not respond to the 72-hour postvaccination phone call. p-value from Chi-square or Fisher’s exact as appropriate.
© 2021 by the authors. Licensee MDPI, Basel, Switzerland. This article is an open access article distributed under the terms and conditions of the Creative Commons Attribution (CC BY) license (http://creativecommons.org/licenses/by/4.0/).
We use cookies on our website to ensure you get the best experience. Read more about our cookies here.
Accept
We have just recently launched a new version of our website. Help us to further improve by taking part in this short 5 minute survey here. here.
Never show this again