Several reports have documented the reproducible and considerable efficacy of the cysteine peptidase-based schistosomiasis vaccine in the protection of mice and hamsters against infection with Schistosoma mansoni and Schistosomahaematobium, respectively. Here, we attempt to identify and define the protection mechanism(s) of the vaccine in the outbred CD-1 mice-S. mansoni model. Mice were percutaneously exposed to S. mansoni cercariae following immunization twice with 0 or 10 μg S. mansoni recombinant cathepsin B1 (SmCB1) or L3 (SmCL3). They were examined at specified intervals post infection (pi) for the level of serum antibodies, uric acid, which amplifies type 2 immune responses and is an anti-oxidant, lipids, in particular, arachidonic acid (ARA), which is an endoschistosomicide and ovocide, as well as uric acid and ARA in the lung and liver. Memory IgG1, IgG2a, and IgG2b antibodies to the cysteine peptidase immunogen were detectable at and following day 17 pi. Serum, lung, and liver uric acid levels in immunized mice were higher than in naïve and unimmunized mice, likely as a consequence of cysteine peptidase-mediated catabolic activity. Increased circulating uric acid in cysteine peptidase-immunized mice was associated with elevation in the amount of ARA in lung and liver at every test interval, and in serum starting at day 17 pi. Together, the results suggest the collaboration of humoral antibodies and ARA schistosomicidal potential in the attrition of challenge S. mansoni (p < 0.0005) at the liver stage, and ARA direct parasite egg killing (p < 0.005). The anti-oxidant and reactive oxygen species-scavenger properties of uric acid may be responsible for the cysteine peptidase vaccine protection ceiling. This article represents a step towards clarifying the protection mechanism of the cysteine peptidase-based schistosomiasis vaccine. View Full-Text
Keywords: Schistosoma mansoni; cysteine peptidases; vaccine; humoral antibodies; uric acid; arachidonic acid Schistosoma mansoni; cysteine peptidases; vaccine; humoral antibodies; uric acid; arachidonic acid
►▼ Show Figures 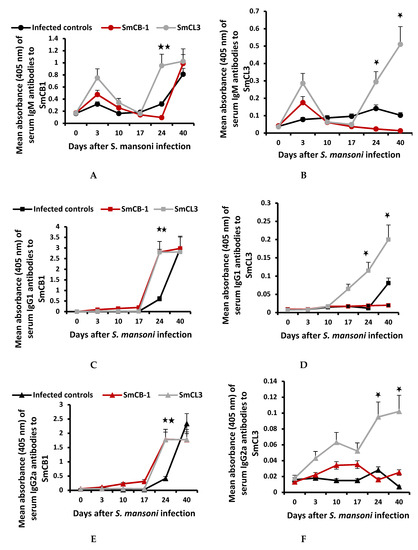