Acceptability of a Hypothetical Zika Vaccine among Women from Colombia and Spain Exposed to ZIKV: A Qualitative Study
Next Article in Special Issue

From the Infection to the Immunotherapy in Cervical Cancer: Can We Stop the Natural Course of the Disease?
Previous Article in Journal

Immunotherapy with Checkpoint Inhibitors for Hepatocellular Carcinoma: Where Are We Now?
Previous Article in Special Issue

Management of the Adverse Effects of Immune Checkpoint Inhibitors

Characteristics of a Novel Target Antigen against Myeloma Cells for Immunotherapy

Despite the availability of therapeutic treatments, multiple myeloma is an incurable haematological disorder. In this study, we aimed to clarify the role of CXorf48 as a therapeutic target in multiple myeloma. Based on a previously identified HLA-A*24:02-restiricted epitope from this novel cancer/testis antigen, we characterized the activities of cytotoxic T lymphocytes (CTLs) specific to this antigen against myeloma cells and evaluated the effects of demethylating agents in increasing antigen expression and enhancing the cytotoxic activity of CTLs. CXorf48 expression was examined by reverse transcription polymerase chain reaction (RT-PCR) using nine myeloma cell lines. Cell lines with low CXorf48 expression were treated by demethylating agents (DMAs), 5-azacytidine (5-aza), and 5-aza-2’-deoxycytidine (DAC) to evaluate gene expression using quantitative RT-PCR. Furthermore, CXorf48-specific CTLs were induced from peripheral blood mononuclear cells of HLA-A*24:02-positive healthy donors to evaluate antigen recognition using ELISpot and 51Cr cytotoxicity assays. CXorf48 was widely expressed in myeloma cells, and gene expression was significantly increased by DMAs. Furthermore, CXorf48-specific CTLs recognized DMA-treated myeloma cells. These findings suggest that CXorf48 is a useful target for immunotherapy, such as vaccination, in combination with demethylating agents for the treatment of patients with myeloma. View Full-Text
Keywords: myeloma; antigen; demethylating agents myeloma; antigen; demethylating agents
►▼ Show Figures 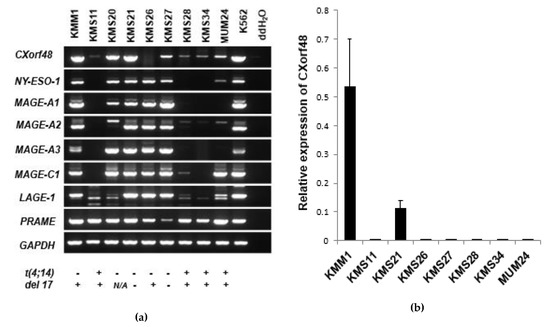