Preventing the Risk of Hospitalization for Respiratory Complications of Influenza among the Elderly: Is There a Better Influenza Vaccination Strategy? A Retrospective Population Study

Influenza and its complications are an important public health concern, and vaccination remains the most effective prevention measure. However, the efficacy of vaccination depends on several variables, including the type of strategy adopted. The goal of this study was to assess the impact of different influenza vaccination strategies in preventing hospitalizations for influenza and its related respiratory complications. A retrospective cohort study was conducted on data routinely collected by the health services for six consecutive influenza seasons, considering the population aged 65 years or more at the time of their vaccination and living in northeastern Italy. Our analysis concerns 987,266 individuals vaccinated against influenza during the study period. The sample was a mean 78.0 ± 7.7 years old, and 5681 individuals (0.58%) were hospitalized for potentially influenza-related reasons. The hospitalization rate tended to increase over the years, not-significantly peaking in the 2016–2017 flu season (0.8%). Our main findings revealed that hospitalizations related to seasonal respiratory diseases were reduced as the use of the enhanced vaccine increased (R2 = 0.5234; p < 0.001). Multivariate analysis confirmed the significantly greater protective role of the enhanced vaccine over the conventional vaccination strategy, with adjusted Odds Ratio (adj OR) = 0.62 (95% CI: 0.59–0.66). A prior flu vaccination also had a protective role (adj OR: 0.752 (95% CI: 0.70–0.81)). Age, male sex, and H3N2 mismatch were directly associated with a higher risk of hospitalization for pneumonia. In the second part of our analysis, comparing MF59-adjuvanted trivalent inactivated vaccine (MF59-TIV) with conventional vaccines, we considered 479,397 individuals, of which 3176 (0.66%) were admitted to a hospital. The results show that using the former vaccine reduced the risk of hospitalization by 33% (adj OR: 0.67 (95% CI: 0.59–0.75)). This study contributes to the body of evidence of a greater efficacy of enhanced vaccines, and MF59-adjuvanted TIV in particular, over conventional vaccination strategies in the elderly. View Full-Text
Keywords: influenza; hospitalization; vaccination strategy; epidemiology influenza; hospitalization; vaccination strategy; epidemiology
►▼ Show Figures 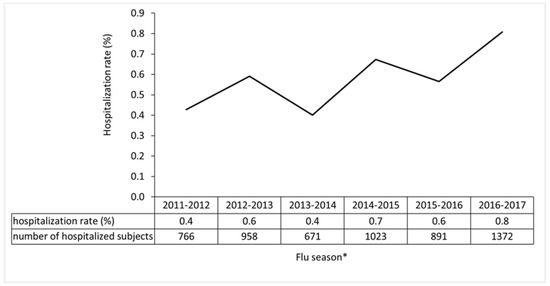