Preventing the Risk of Hospitalization for Respiratory Complications of Influenza among the Elderly: Is There a Better Influenza Vaccination Strategy? A Retrospective Population Study

Rotaviruses (RVs) are the leading pathogens causing severe and acute diarrhea in children and animals. It is well known that sex contributes to shaping immune responses, thus it could also influence the incidence and severity of the RV infection. The aim of this study was to analyze the influence of sexual dimorphism on RV infection and its antibody (Ab) immune response in a suckling rat model. Neonatal suckling rats were intragastrically RV-inoculated and clinical indexes derived from fecal samples, as well as immune variables were evaluated. Higher severity of diarrhea, fecal weight and viral elimination were observed in males compared to females (p < 0.05). Regarding the adaptative immunity, the RV shaped the immune response to lower IgG1 levels and an increased Th1/Th2-associated Ab response (p < 0.05). Although females had lower IgG2a levels than males (p < 0.05), the specific anti-RV antibody levels were not sex influenced. In fact, at this age the passive transfer of anti-RV antibodies through breast milk was the critical factor for clustering animals, independently of their sex. It can be concluded that male and female diarrhea severity in RV infection is slightly influenced by sexual dimorphism and is not associated with the specific immune response against the virus. View Full-Text
Keywords: rotavirus; dimorphism; immunity; diarrhea rotavirus; dimorphism; immunity; diarrhea
►▼ Show Figures 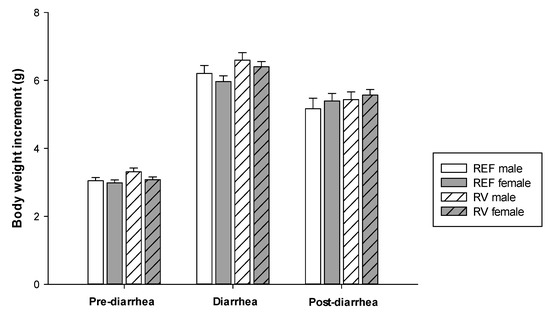