Myxoma virus (MYXV) is the prototypic member of the Leporipoxvirus genus of the Poxviridae family of viruses. In nature, MYXV is highly restricted to leporids and causes a lethal disease called myxomatosis only in European rabbits (Oryctologous cuniculus). However, MYXV has been shown to also productively infect various types of nonrabbit transformed and cancer cells in vitro and in vivo, whereas their normal somatic cell counterparts undergo abortive infections. This selective tropism of MYXV for cancer cells outside the rabbit host has facilitated its development as an oncolytic virus for the treatment of different types of cancers. Like other poxviruses, MYXV possesses a large dsDNA genome which encodes an array of dozens of immunomodulatory proteins that are important for host and cellular tropism and modulation of host antiviral innate immune responses, some of which are rabbit-specific and others can function in nonrabbit cells as well. This review summarizes the functions of one such MYXV host range protein, M029, an ortholog of the larger superfamily of poxvirus encoded E3-like dsRNA binding proteins. M029 has been identified as a multifunctional protein involved in MYXV cellular and host tropism, antiviral responses, and pathogenicity in rabbits. View Full-Text
Keywords: myxoma virus; MYXV; M029; dsRNA binding proteins; vaccinia E3; oncolytic virus myxoma virus; MYXV; M029; dsRNA binding proteins; vaccinia E3; oncolytic virus
►▼ Show Figures 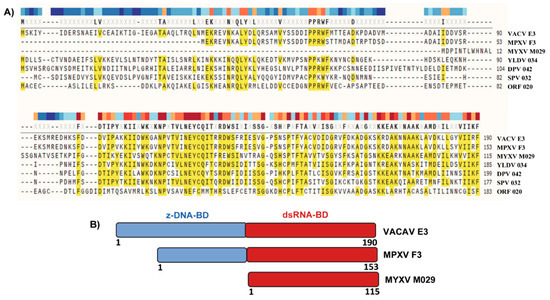