Seasonal influenza virus epidemics continue to cause millions of hospitalizations, and hundreds of thousands of deaths globally each year [1]. Attack rates for influenza virus infections are consistently highest among children, and those under 5 years of age are considered to be especially vulnerable to severe outcomes [2]. Indeed, a recent systematic analysis estimated that influenza virus infections are responsible for a worldwide average of 870,000 hospitalizations of children <5 years old each year [3]. Furthermore, children are also thought to be a significant source of viral transmission [4,5,6,7]. Seasonal vaccination continues to be the most effective way to prevent influenza virus infection, and many countries have adopted government-sponsored influenza immunization programs to protect their populations.
While inactivated influenza vaccines (IIV) formulations have been available for several decades, the first live-attenuated influenza vaccines (LAIV) widely approved for use in humans was manufactured by MedImmune (FluMist®/Fluenz™) and became available in 2003 [8]. In several early randomized clinical trials, trivalent LAIV demonstrated superior efficacy relative to trivalent inactivated influenza virus vaccine (TIV) in children [9,10]. As a result, the U.S. Advisory Committee on Immunization Practices (ACIP) preferentially recommended the use of LAIV for healthy children aged 2 to 8 years during the 2014–2015 season [11]. This preferential recommendation was lifted during the 2015–2016 season, when the ACIP advised that either IIV or LAIV was appropriate for healthy individuals 2 through 49 years [12]. However, in their 2016–2017 report, the ACIP recommended against using the use of LAIV, citing data for the U.S. Vaccine Effectiveness Network that indicated no significant vaccine effectiveness of quadrivalent LAIV against all influenza A and B strains for children aged 2 to 17 [13]. In contrast, a recent cluster randomized blinded trial conducted in children aged 3 to 15 years by members of this group reported equivalent efficacy of IIV and LAIV across the three influenza seasons spanning October 2012 to May 2015 for all strains tested [14]. Most recently, the ACIP has again recommended quadrivalent LAIV for use in populations for whom it is appropriate, but without preference relative to IIV [15].
Here, we compare the immunogenicity of IIV and LAIV after vaccination of Hutterite children with the 2014–2015 Northern Hemisphere trivalent vaccines. Hemagglutination inhibition (HAI) titers, serum IgA endpoint titers, and mucosal IgA titers against the influenza A virus (IAV) components (H1N1 and H3N2) of the vaccines were evaluated.

In this study, we assessed 618 healthy Hutterite children and adolescents aged 3 to 15 years in the 2014–2015 flu season who participated in a cluster randomized clinical trial (ClinicalTrials.gov: NCT01653015) that compared the direct and indirect protectiveness of trivalent IIV and trivalent LAIV, as reported previously [14]. The 2014–2015 season was chosen because this is the only season during which both serum and mucosal samples were collected. In this trial, participants were randomly assigned by colonies to two study groups—IIV group and LAIV group. Healthy children and adolescents aged 3 to 15 years in these two study groups received either IIV or LAIV depending on the group to which their Hutterite colony was randomized. In both LAIV and IIV colonies, previously unvaccinated children aged less than 9 years of age at the time of immunization received a second dose of the same vaccine four weeks following the first dose. The administration of each vaccine formulation occurred over a similar time-frame (average vaccination date for IIV was 2014-11-21; average vaccination date for LAIV was 2014-11-22). For the current study, we used previously obtained specimens from 618 children and adolescent participants from this trial. Of these, 278 were from IIV group and 340 from LAIV group. The IAV antigens included in the both IIV and LAIV were A/California/7/2009 (H1N1) pdm09-like virus, A/Texas/50/2012 (H3N2)-like virus, and B/Massachusetts/2/2012-like virus, all of which were well-matched with circulating strains in Canada during the 2014–2015 influenza season.

Blood samples were drawn from participants at baseline and between 3 and 5 weeks post-vaccination. For previously unvaccinated children under 9 years of age who received two doses of vaccine, samples were collected after the second dose. Active surveillance was conducted twice weekly during the influenza season (28 December 2014, to 20 May 2015) and those with two or more signs or symptoms compatible with influenza were tested by RT-PCR of nasal swabs. We collected nasal swabs to test for mucosal IgA antibodies at baseline and three weeks after vaccination with either IIV or LAIV.

ELISAs were performed on 96-well Nunc-immuno maxisorp plates (Thermo Scientific, Waltham, MA, USA). The plates were coated overnight with 2 ug/mL per well of purified recombinant HA (A/California/07/2009 H1 or A/Texas/50/2012 H3) in bicarbonate–carbonate coating buffer (100 mM, pH 9.4). The plates were blocked with 5% skim milk for 1 h. Serum samples were serially diluted starting with 1:50 dilution in 5% skim milk and then incubated for 1 h at room temperature. Mucosal samples were undiluted and were incubated for 1 h at room temperature. Plates were washed three times with PBS-T (0.1% Tween 20). Secondary goat anti-human IgA-horseradish peroxidase (HRP) (Santa Cruz Biotechnology, Dallas, TX, USA) at 1:4000 dilution was added in 5% skim milk for 1 h at room temperature, followed by 3x PBS-T wash prior to addition of HRP substrate (Sigmafast OPD, Sigma Aldrich, St. Louis, MO, USA). Reactions were stopped after 10 min by the addition of 3 M HCl, and the optical densities were read at 490 nm on a Spectramax I3 (Molecular Devices, San Jose, CA, USA). Endpoint titers of serum IgA were defined as the lowest dilution whose optical density remained three standard deviations above the mean of negative control wells. Since mucosal IgA could only be reliably measured using undiluted samples, only normalized optical density (O.D.) values were reported. We chose to favor specificity over sensitivity, and therefore, normalization was performed by subtracting the mean O.D. plus three standard deviations of blank samples from each experimental sample.

We compared pre- and post-vaccination antibody titers in terms of three types of antibody measures through paired t tests for both the IIV and LAIV groups. A Mann–Whitney U test was used to compare the changes of the three antibody titers between the IIV and LAIV groups. We used linear regression to estimate the associations between antibody changes and their related factors. A backward stepwise selection method was used to determine the variables in the final model. Finally, we evaluated the correlation of protection against influenza by calculating protective effectiveness using Cox’s proportional hazards model. The protective effectiveness was defined as (1-hazard ratio) X 100%. All analyses were performed in R version 3.4.2.

3.4. Mucosal Responses to IIV and LAIV

3.6. Correlates of Protection against H3N2 Infection

We only detected H3N2 cases in the study participants, consistent with the known dominance of H3N2 circulation during the 2014–2015 season. Therefore, the correlates of protection analysis were only performed for the H3N2 virus.
For HAI titers, protective effectiveness estimates in the IIV group were statistically significant at titer values of 1:80 and 1:160. The estimates at these two titer values were similar (77% vs. 76%) (Table 4). HAI titer was not a correlate of protection in the LAIV group.
Serum IgA titers did not correlate with protection in either the IIV group or the LAIV group (Table 5). For mucosal IgA titers, protective effectiveness estimates for the LAIV group were statistically significant at all cut-off values. The estimates at 0.0001, 0.001, and 0.01 were similar (88% vs. 87% vs. 88%) (Table 6). We were unable to produce estimates for IIV group due to the smaller sample size.

This study was supported, in part, by a CIHR Operating Grant, a CIHR New Investigator Award and an Early Researcher Award from the Government of Ontario (M.M.). The study was also supported by a CIHR Foundation Grant (M.L.) and NIAID Centers of Excellence for Influenza Virus Research and Surveillance (CEIRS) contract HHSN272201400008C (F.K.). 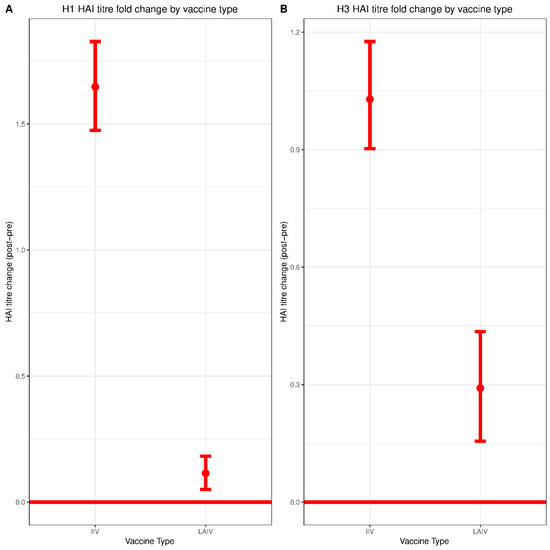 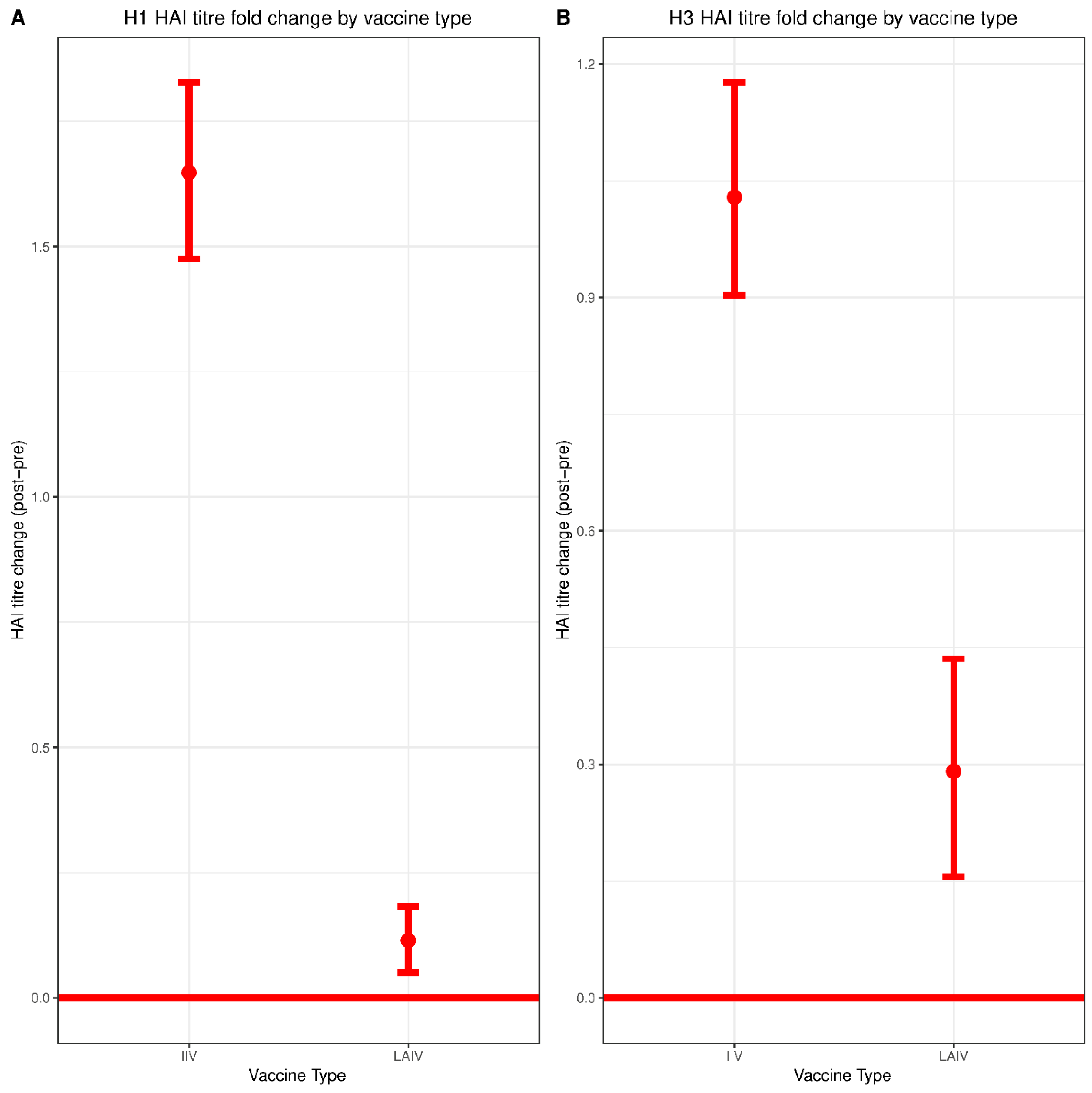 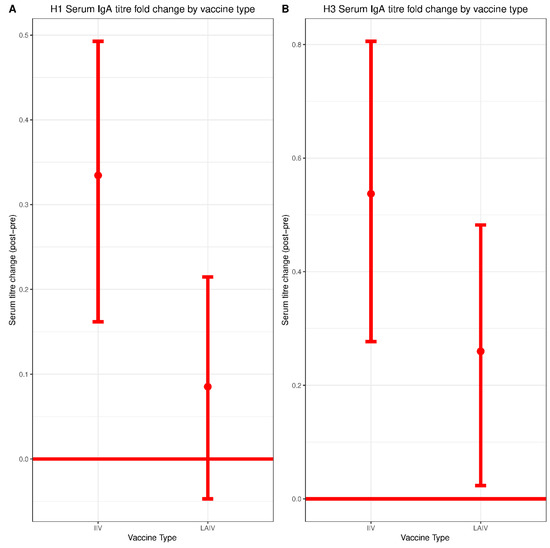 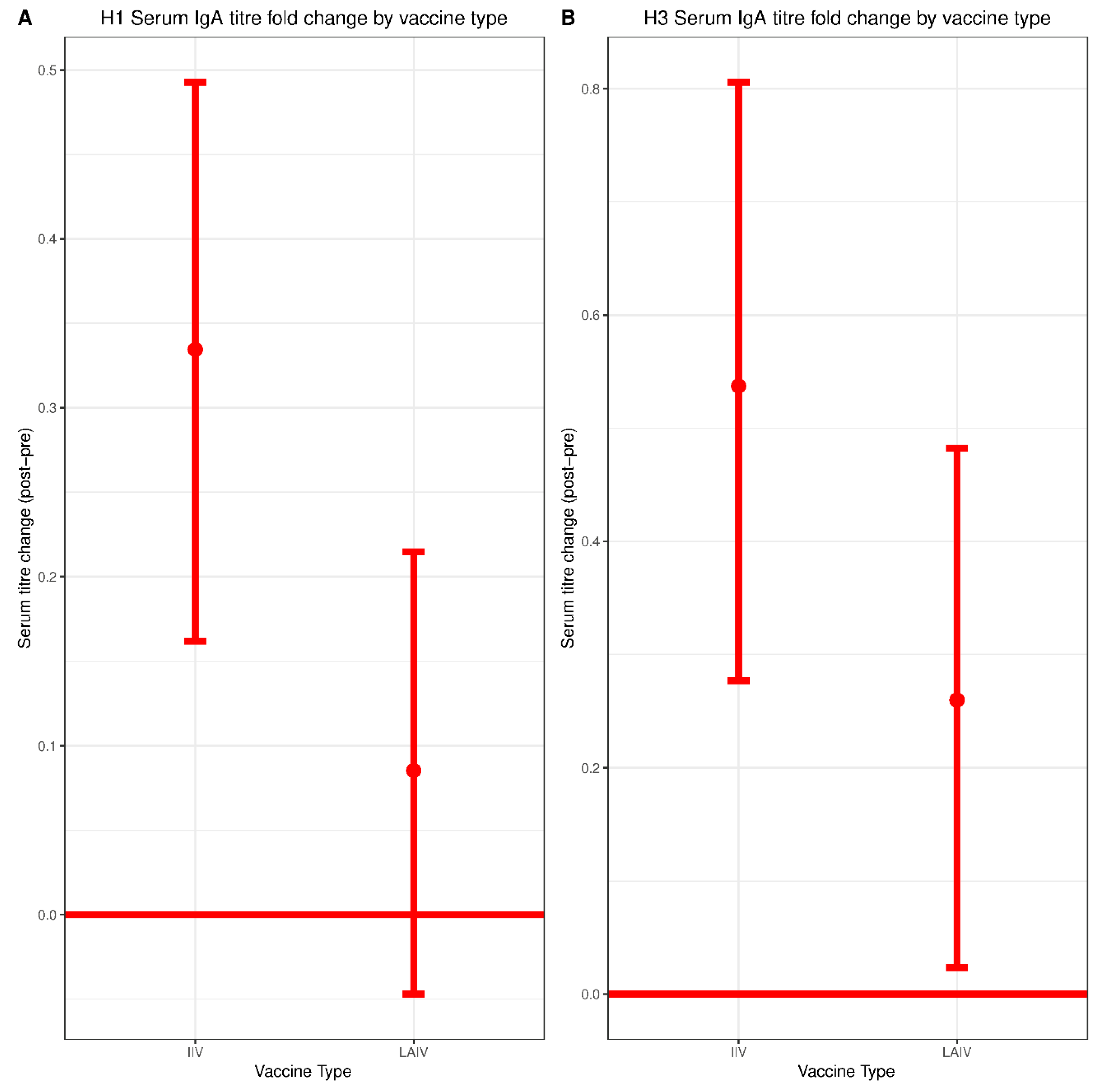 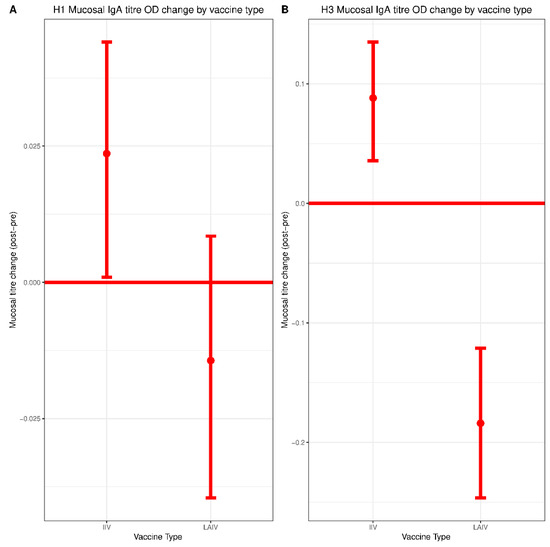 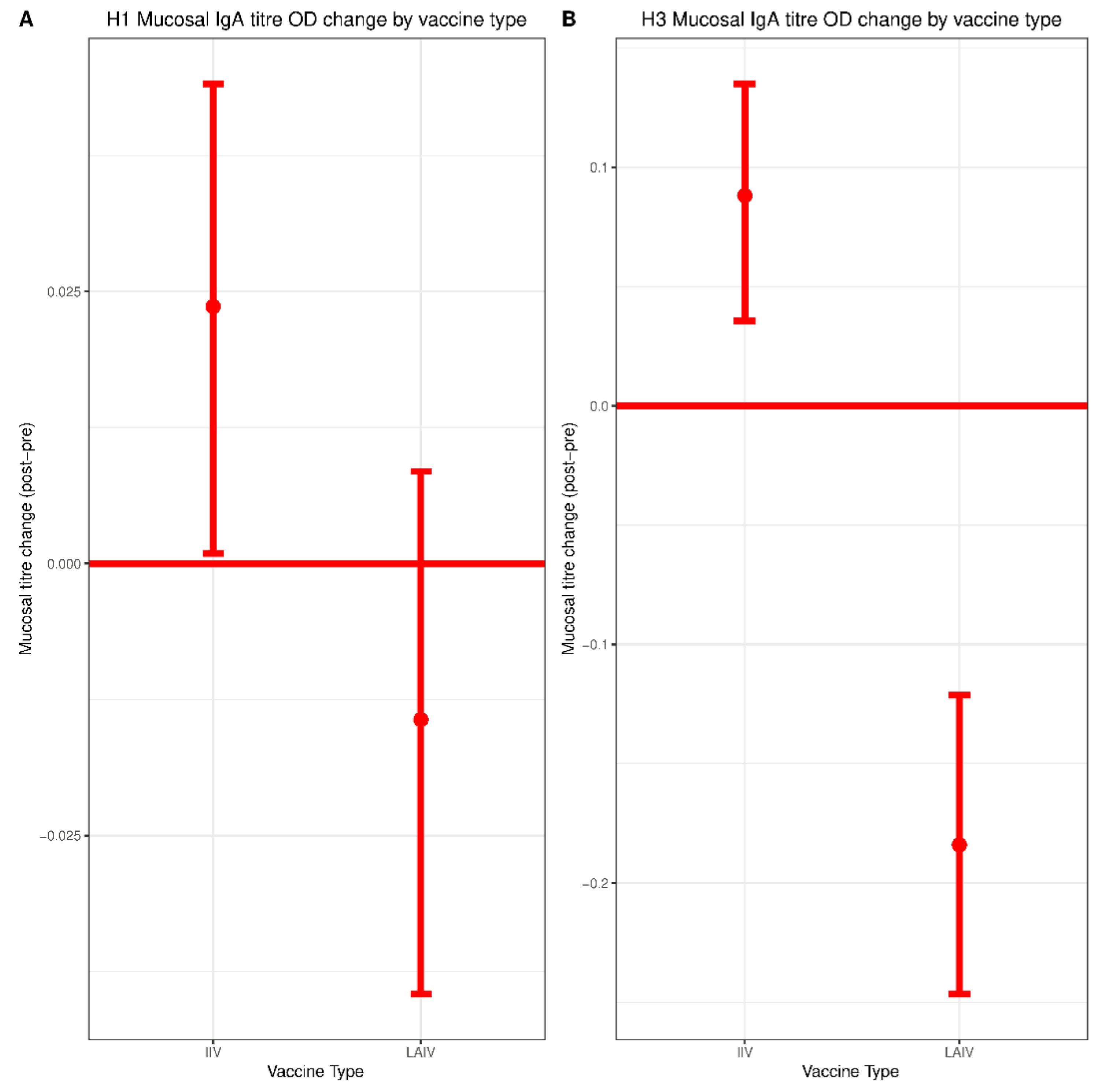 Table 6. Protectiveness of mucosal IgA against H3N2.
Table 6. Protectiveness of mucosal IgA against H3N2.
N.D. = not determined. In these cases, protectiveness estimates could not be generated by the model due to low sample size. † Total infected = 11; ‡ Total infected = 8.
© 2019 by the authors. Licensee MDPI, Basel, Switzerland. This article is an open access article distributed under the terms and conditions of the Creative Commons Attribution (CC BY) license (http://creativecommons.org/licenses/by/4.0/).
We use cookies on our website to ensure you get the best experience. Read more about our cookies here.
Accept
We have just recently launched a new version of our website. Help us to further improve by taking part in this short 5 minute survey here. here.
Never show this again