Advances in high-throughput single-cell RNA sequencing (scRNA-seq) have been limited by technical challenges such as tough cell walls and low RNA quantity that prevent transcriptomic profiling of microbial species at throughput. We present microbial Drop-seq or mDrop-seq, a high-throughput scRNA-seq technique that is demonstrated on two yeast species, Saccharomyces cerevisiae, a popular model organism, and Candida albicans, a common opportunistic pathogen. We benchmarked mDrop-seq for sensitivity and specificity and used it to profile 35,109 S. cerevisiae cells to detect variation in mRNA levels between them. As a proof of concept, we quantified expression differences in heat shock S. cerevisiae using mDrop-seq. We detected differential activation of stress response genes within a seemingly homogenous population of S. cerevisiae under heat shock. We also applied mDrop-seq to C. albicans cells, a polymorphic and clinically relevant species of yeast with a thicker cell wall compared to S. cerevisiae. Single-cell transcriptomes in 39,705 C. albicans cells were characterized using mDrop-seq under different conditions, including exposure to fluconazole, a common anti-fungal drug. We noted differential regulation in stress response and drug target pathways between C. albicans cells, changes in cell cycle patterns and marked increases in histone activity when treated with fluconazole. We demonstrate mDrop-seq to be an affordable and scalable technique that can quantify the variability in gene expression in different yeast species. We hope that mDrop-seq will lead to a better understanding of genetic variation in pathogens in response to stimuli and find immediate applications in investigating drug resistance, infection outcome and developing new drugs and treatment strategies. View Full-Text
Keywords: mDrop-seq; scRNA-seq; high-throughput; fluconazole; Candida albicans; Saccharomyces cerevisiae; stress response; cell-cycle mDrop-seq; scRNA-seq; high-throughput; fluconazole; Candida albicans; Saccharomyces cerevisiae; stress response; cell-cycle
►▼ Show Figures 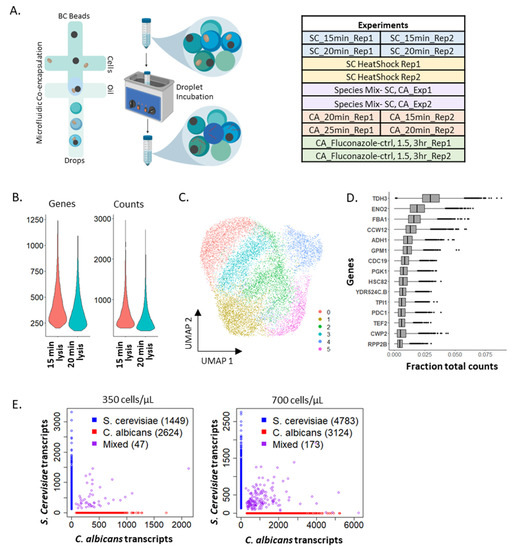 Ryan Dohn
Ryan Dohn is a graduate student in the University of Chicago's Genetics, Genomics, and Systems Biology Ph.D. program under Dr. Anindita Basu. In the Basu lab, he has worked to develop and implement a high-throughput scRNA-seq technology for various species of yeast based on the Drop-seq protocol. Specifically, the opportunistic pathogens of the genus Candida are of interest due to their prevalence as a common hospital acquired infection and risk to immunocompromised individuals.

Bingqing Xie
Bingqing Xie is a fourth-year postdoc scholar in Dr. Anindita Basu’s lab at the University of Chicago. She held a Ph.D. in computer science from the Illinois Institute of Technology, and her research interest mainly lies in developing machine learning and statistical algorithms for system biology. Bingqing Xie’s Ph.D. thesis was on gene prioritization via probabilistic graph models. The algorithm she developed integrates results from both RNA-seq experiments and existing functional associations among the genes. Her current projects focus on recovering cell-level cancer or pathogen-associated mechanisms using single-cell assays and developing a single-cell analysis pipeline to annotate subpopulations and their functional associations with the cancer micro-environment or disease states. Meanwhile, she works with the Lynx bioinformatics team at the University of Chicago to build clinical data integrative platforms for biological research.

Rebecca Back
Rebecca Back graduated from the University of Illinois at Urbana-Champaign in 2017 with a degree in Animal Sciences Pre-Veterinary Medicine. From 2018, she worked in Dr. Anindita Basu’s research lab at the University of Chicago studying single-cell RNA-sequencing (scRNA-seq) using microfluidic devices for projects such as the Human Cell Atlas Seed Network to develop an adult cardiomyocyte scRNA-seq method, characterizing the tumor microenvironment in ovarian cancer, and host-pathogen interactions of macrophages and C. albicans. In 2021, Rebecca started her PhD in Genetics at the University of Wisconsin-Madison.

Heather Eckart
Heather Eckart is a sales associate with 10x Genomics and was formally the laboratory manager for Dr Basu at the University of Chicago (2017-2021). Heather has her BA in Biology from Trinity Christian College and has been conducting research at both the government and academic level since 1999. She specializes in high-throughput single cell genomics and has worked with many different single-cell technologies and sample types. Her past experiences include work with two other labs at the University of Chicago focusing on STARR-seq as well as other bulk assays and in enzyme production and purifications. Heather began her professional career at Argonne National Laboratory focused on membrane protein purification and crystallization.

Reeta Prusty Rao
Dr. Reeta P Rao is working as a Professor in Dept. Biology & Biotechnology at WPI, Worcester, MA. She studies the biology of fungal diseases, particularly those caused by Candida, a species of fungi prevalent in humans. These microorganisms cause oral thrush, ear infections, and vaginitis but can also cause systemic infections in immunocompromised individuals. As an academic scientist, Reeta Rao is committed to the professional development of the next generation of Scientists. Dr. Rao also a fellow of the American Academy of Microbiology.

Anindita Basu
Basu is an Assistant Professor in Medicine at the University of Chicago and leads a multi-disciplinary research group that uses genomics, microfluidics, imaging and nano/bio-materials to develop new tools to aid in diagnosis and treatment of disease. Basu obtained B.S. in Physics and Computer Engineering at the University of Arkansas, Ph.D. in soft matter Physics at University of Pennsylvania, followed by post-doctoral studies in Applied Physics, Molecular Biology and Bioinformatics at Harvard University and Broad Institute. Her lab applies high-throughput single-cell genomics to map cell types and their function in different organs and organisms. Other efforts in her group include developing new microfluidic and genomic tools to profile host-pathogen interaction at single cell resolution, single-cell RNA-seq in microbes and combining 3D printing, programed flow and imaging to model thrombosis in dialysis patients.
Zoom | Orient | As Lines | As Sticks | As Cartoon | As Surface | Previous Scene | Next Scene
We use cookies on our website to ensure you get the best experience. Read more about our cookies here.
Accept
We have just recently launched a new version of our website. Help us to further improve by taking part in this short 5 minute survey here. here.
Never show this again