Carotenoids are bioactive compounds with widely accepted health benefits. Their quantification in human faeces can be a useful non-invasive approach to assess their bioavailability. Identification and quantification of major dietary carotenoids in human faeces was the aim of the present study. Faeces and dietary intake were obtained from 101 healthy adults (45–65 years). Carotenoid concentrations were determined by HPLC in faeces and by 3-day food records in dietary intake. Carotenoids quantified in faeces (μg/g dry weight, median) were: β-carotene (39.5), lycopene (20), lutein (17.5), phytoene (11.4), zeaxanthin (6.3), β-cryptoxanthin (4.5), phytofluene (2.9). α-carotene (5.3) and violaxanthin were found 75.5% and 7.1% of the faeces. The carotenoids found in the highest concentrations corresponded to the ones consumed in the greatest amounts (μg/d): lycopene (13,146), phytoene (2697), β-carotene (1812), lutein+zeaxanthin (1148). Carotenoid concentration in faeces and in dietary intake showed correlation for the total non-provitamin A carotenoids (r = 0.302; p = 0.003), phytoene (r = 0.339; p = 0.001), phytofluene (r = 0.279; p = 0.005), lycopene (0.223; p = 0.027), lutein+zeaxanthin (r = 0.291; p = 0.04) and β-cryptoxanthin (r = 0.323; p = 0.001). A high proportion of dietary carotenoids, especially those with provitamin A activity and some of their isomers, reach the large intestine, suggesting a low bioavailability of their intact forms. View Full-Text
Keywords: carotenes; xanthophylls; diet; stool; bioavailability; middle-age people carotenes; xanthophylls; diet; stool; bioavailability; middle-age people
►▼ Show Figures 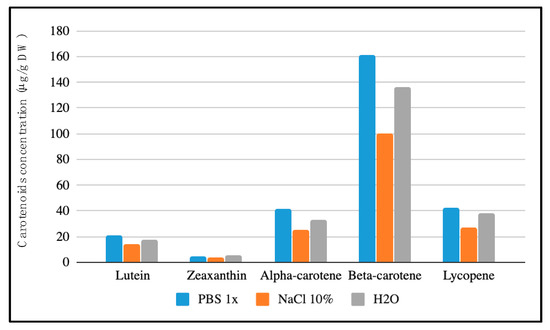