Overproduction of oxidants in the human body is responsible for oxidative stress, which is associated with several diseases. High intake of vegetables and fruits can reduce the risk of chronic diseases, as they are sources of bioactive compounds capable of contrasting the free radical effects involved in cancer, obesity, diabetes, and neurodegenerative and cardiovascular diseases. Capsicum annuum L. cv Senise is a sweet pepper that is grown in the Basilicata region (Italy). It is an important source of polyphenols, carotenoids, and capsinoids and can play a key role in human health. In this study, an ethanol extract was obtained from C. annuum dried peppers and the analysis of the phytochemical composition was performed by LC-ESI/LTQ Orbitrap/MS. The extract was incorporated into liposomes, which showed small size (~80 nm), good homogeneity, negative surface charge, and good stability in storage. The biological activity of the extract was evaluated in the human hepatoma (HepG2) cell line, used as model cells. The extract showed no cytotoxic activity and reduced the intracellular reactive oxygen species (ROS) level in stressed cells. The antioxidant activity was further improved when the extract was loaded into liposomes. Moreover, the extract promoted the expression of endogenous antioxidants, such as catalase, superoxide dismutase, and glutathione peroxidase through the Nrf-2 pathway evaluated by RT-PCR. View Full-Text
Keywords: Capsicum annuum L.; Senise cultivar; dried pepper; polyphenols; liposomes; oxidative stress; cellular antioxidant activity Capsicum annuum L.; Senise cultivar; dried pepper; polyphenols; liposomes; oxidative stress; cellular antioxidant activity
►▼ Show Figures 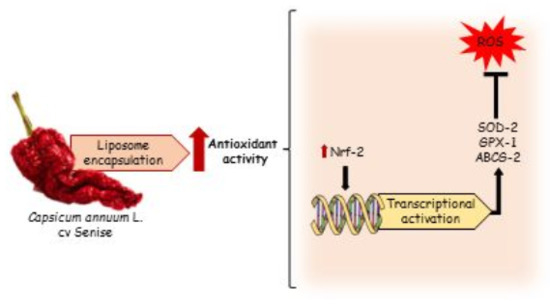