Insights on the Effects of Resveratrol and Some of Its Derivatives in Cancer and Autoimmunity: A Molecule with a Dual Activity
Previous Article in Journal

Fish processing has serious economic and environmental costs in the food supply chain. It is necessary to find new ways to convert fish residue to added-value products, especially for main aquaculture species. In this study, a pulsed electric field (PEF) process for antioxidant extract production from three residues (gills, bones, and heads) of two commercial species (sea bream and sea bass) was tested. Three methods of extraction using two solvents (water and methanol) and a water extraction assisted by PEF were assessed. Chemical and mineral compositions, as well as amino acid profile of the by-products, were determined. In addition, four in vitro antioxidant methods, 2,2-diphenyl-1-picrylhydrazyl radical scavenging activity (DPPH), 2,2-azinobis-(3-ethyl-benzothiazoline-6-sulphonate radical (ABTS), ferric reducing antioxidant power assay (FRAP), and oxygen radical absorbance capacity assay (ORAC), were used to evaluate the extracts. Antioxidant activity was confirmed by DPPH and ABTS and FRAP tests, obtaining the highest values for residues from the sea bream species. ORAC values were higher in methanol than in water solvent. In general, gills were the residues with the greatest antioxidant activity for the four antioxidant assays employed. For DPPH assay, the extracts of water assisted by PEF from heads, bones, and gills yielded significant increases of 35.8%, 68.6%, and 33.8% for sea bream and 60.7%, 71.8%, and 22.1% for sea bass, respectively, with respect to water extracts. Our results suggest that PEF would be an environmentally friendly and economic choice for antioxidant-extract production from low-value by-products from fish processing. View Full-Text
Keywords: sea bream; sea bass; by-products; antioxidant capacity; amino acid sea bream; sea bass; by-products; antioxidant capacity; amino acid
►▼ Show Figures 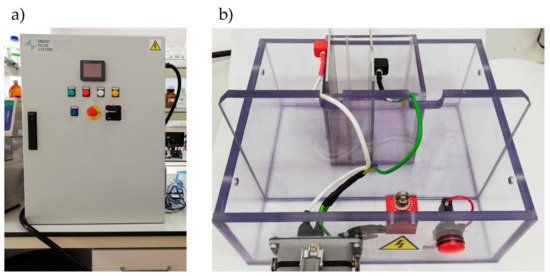