Macrosphyra longistyla has been used in many traditional systems of medicine for its anti-hemorrhagic, antidiabetic, anti-ulcer, and anti-diarrhea properties. The acetylcholinesterase (AChE) and butyrylcholinesterase (BuChE) inhibitions of the crude methanol extracts and its various partitioned fractions were determined by a modified method of Ellman. An evaluation of the antioxidant activity was carried out using 1,1-diphenyl-2-picryl-hydrazyl (DPPH) radical scavenging, ferric reducing power, and nitric oxide scavenging assays. The total flavonoids were estimated based on the aluminum chloride method, while the total tannins and phenolics were estimated based on the vanillin–HCl and Folin–Ciocalteu method, respectively. The ethyl acetate fraction had the highest DPPH radical scavenging activity, and the highest ferric reducing power with a concentration providing 50% inhibition (IC50) of 0.079 mg/mL and 0.078 mg/mL, respectively, while the crude methanol extract had the highest nitric oxide scavenging activity with an IC50 of 0.008 mg/mL. The methanol extract had the highest phenolics and flavonoids contents, while the aqueous fraction had the highest tannin content. The crude methanol extract had the best AChE and BuChE inhibitory action, with an IC50 of 0.556 µg/mL and 5.541 µg/mL, respectively, suggesting that the plant had a better AChE inhibiting potential. A moderate correlation was observed between the phenolic content and DPPH radical scavenging, NO radical scavenging, and AChE inhibitory activities (r2 = 0.439, 0.430, and 0.439, respectively), while a high correlation was seen between the flavonoid content and these activities (r2 = 0.695, 0.724, and 0.730, respectively), and the ferric reducing antioxidant power correlated highly with the proautocyanidin content (r2 = 0.801). Gas chromatography mass spectrometry (GCMS) revealed decanoic acid methyl ester (24.303%), 11,14-eicosadienoic acid methyl ester (16.788%), linoelaidic acid (10.444%), pentadecanoic acid (9.300%), and 2-methyl-hexadecanal (9.285%). Therefore, we suggest that M. longistyla contain bioactive chemicals, and could be a good alternative for the management of Alzheimer’s and other neurodegenerative diseases. View Full-Text
Keywords: Macrosphyra longistyla; cholinesterase; antioxidant; total phenolic; total flavonoid Macrosphyra longistyla; cholinesterase; antioxidant; total phenolic; total flavonoid
►▼ Show Figures 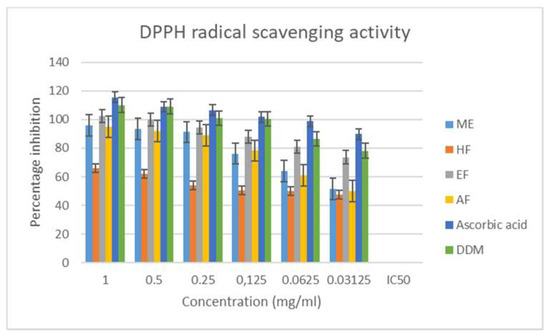