Investigation of In-Vitro Antioxidant and Electrochemical Activities of Isolated Compounds from Salvia chamelaeagnea P.J.Bergius Extract
Next Article in Special Issue

Expression of Antioxidant Enzymes in Patients with Uterine Polyp, Myoma, Hyperplasia, and Adenocarcinoma

During the life cycle, aerobic organisms are exposed to a number of endogenous and exogenous sources of reactive oxygen species (ROS). To achieve redox homeostasis they developed a powerful antioxidant system (AOS) [1], whose main enzyme components are superoxide dismutase (SOD), catalase (CAT), glutathione peroxidase (GPx), and glutathione reductase (GR). The transcription factor Nrf2 is responsible for regulating a battery of antioxidant and detoxification enzymes [2,3], as well as processes such as stress response, proliferation, and proteasomal degradation [4,5]. Nrf2 was also identified as an important transcription factor regulating development, progression, and chemoresistance of cancer [6].
Cancer develops over three stages, initiation, promotion, and progression, and oxidative stress is associated with each of them [7]. Endometrial cancer ranks as the fourth most common neoplasm in women from European countries [8]. It has been shown that premalignant changes precede the malignant transformation of the uterus, which is why hyperplasia may be considered as a precursor of endometrial cancer [9,10,11]. Despite numerous studies, the molecular processes involved in multi-stage development of endometrial cancer are still not completely known.
We have previously shown that gonadotropins influence the antioxidant enzyme (AOE) activity in women with uterine hyperplasia simplex, hyperplasia complex, leiomyoma, and polyps [12,13,14,15]. Also, the extent of AOE and lipid hydroperoxides (LOOH) alterations varied with the examined gynecological diagnosis, including adenocarcinoma [16]. The aim of this study was to further clarify the mechanism responsible for the observed AO alterations. Therefore, we examined the changes of protein and mRNA levels of copper-zinc superoxide dismutase (CuZnSOD), catalase (CAT), glutathione peroxidase (GPx), glutathione reductase (GR), and Nrf2 in uterine tissue of patients with benign (polyps and myomas), premalignant (hyperplasia simplex and hyperplasia complex), and malignant (adenocarcinoma) transformations. We also examined correlations of AOE expression with the AOE activity, lipid hydroperoxides (LOOH) level, and level of Nrf2. Results showed significant differences in AO parameters among examined groups of gynecological patients, and indicated their important role in pathophysiological processes in endometrium.

The results of our study clearly showed that in the course of benign, premalignant, and malignant uterine transformation significant changes occurred in expression level of Nrf2, and consequently on transcriptional and translational levels of AOE. It is also evident that the impact of AOE expression on their enzyme activity depends not only on the type of the enzyme, but also on the type of endometrial transformation. Observed findings could contribute to a better insight into molecular mechanisms connecting oxidative stress with different gynecological disorders, and to a better understanding of therapeutic approaches based on altering the cellular redox status.

This work was supported by the Ministry of Education, Science, and Technological Development of the Republic of Serbia (Grant numbers 41027, 173041). 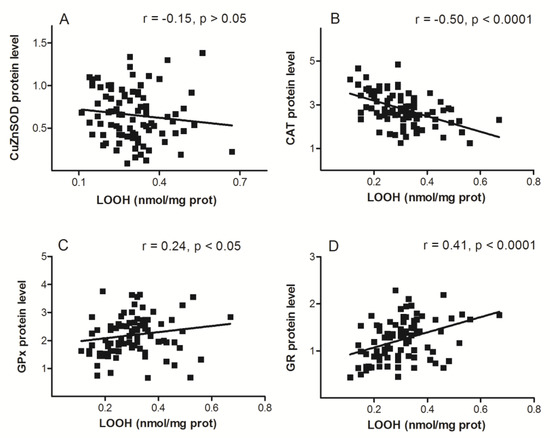 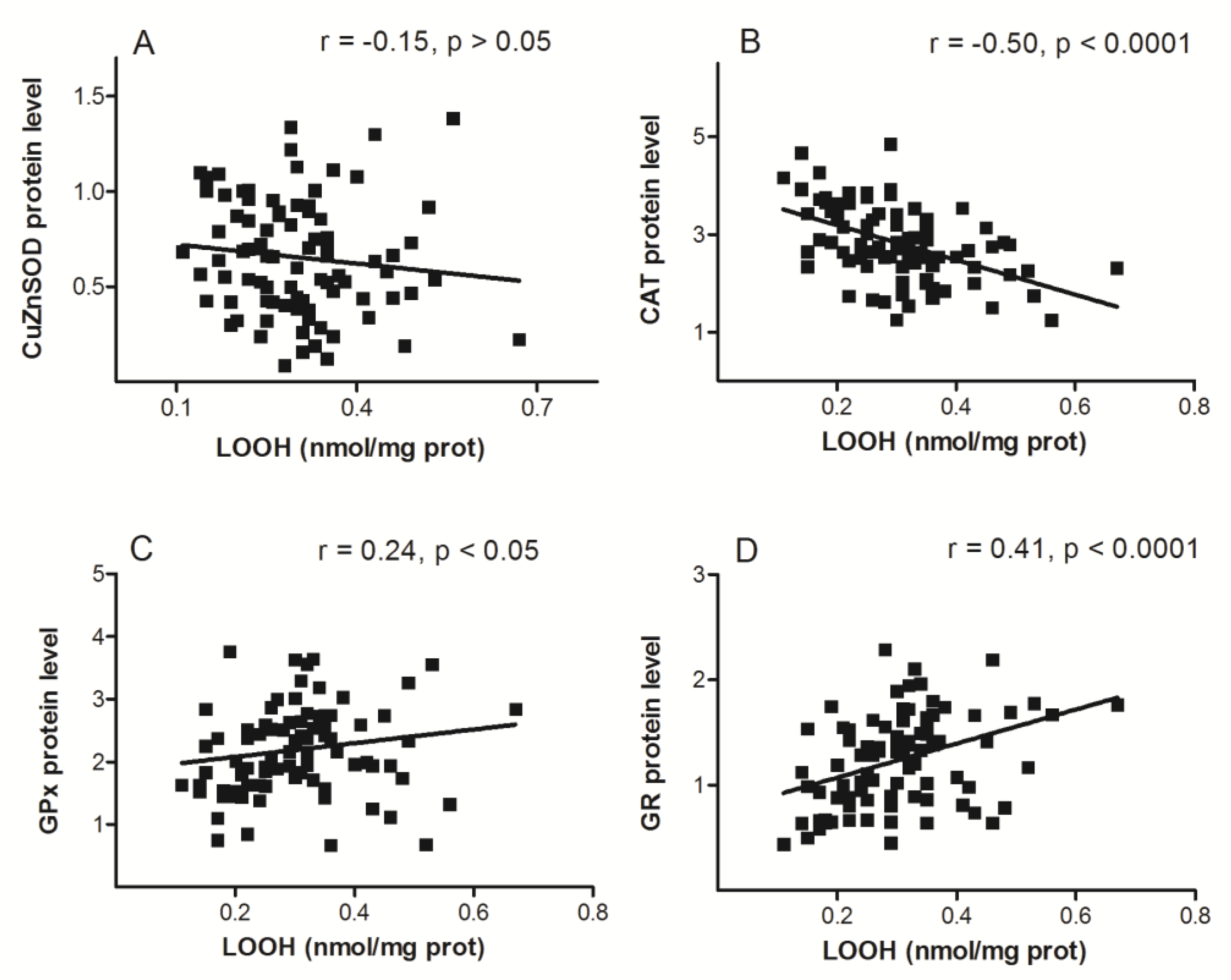 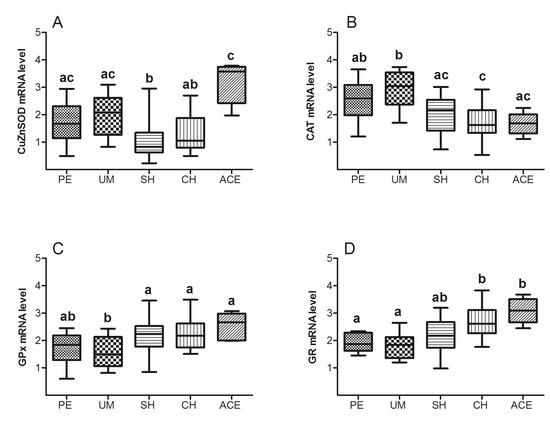 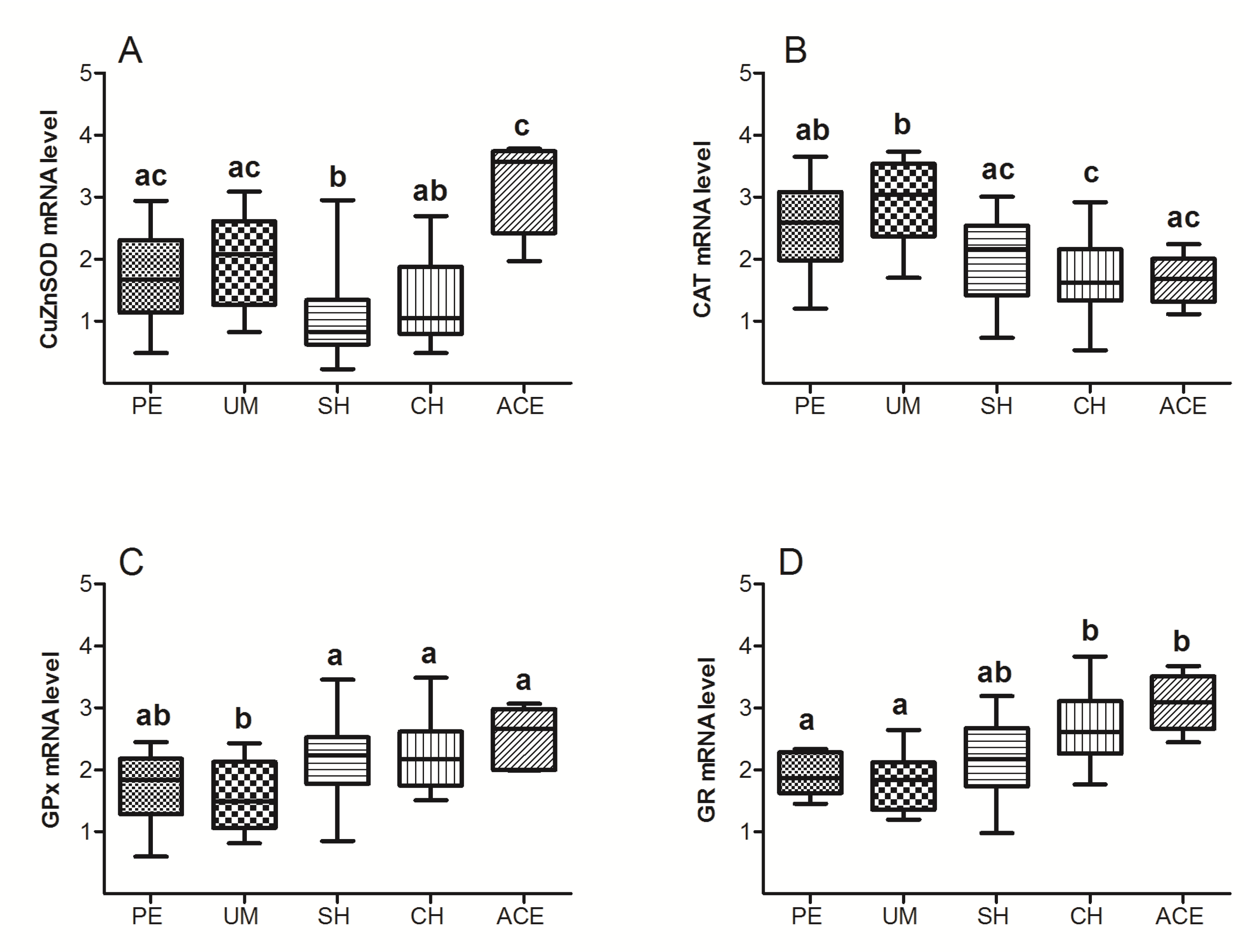 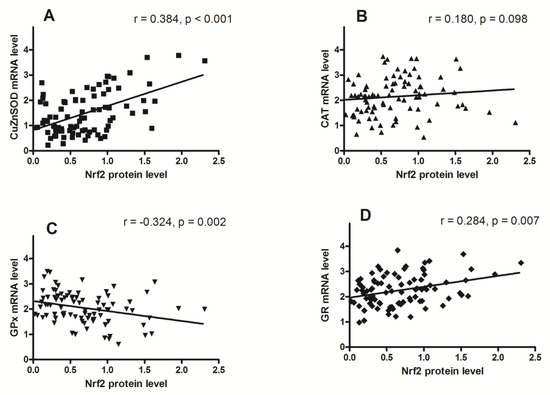 Table 1. Patients characteristics.
Table 1. Patients characteristics.
1 MP—Metrorrhagia prolongata, MR—Metrorrhagia recidivans, MPM—Metrorrhagia postmenopausi. 2 PE—polypus endometrii, UM—uterus myomatosus, SH—hyperplasia simplex endometrii, CH—hyperplasia complex endometrii, ACE—adenocarcinoma endometrii.
© 2019 by the authors. Licensee MDPI, Basel, Switzerland. This article is an open access article distributed under the terms and conditions of the Creative Commons Attribution (CC BY) license (http://creativecommons.org/licenses/by/4.0/).
We use cookies on our website to ensure you get the best experience. Read more about our cookies here.
Accept
We have just recently launched a new version of our website. Help us to further improve by taking part in this short 5 minute survey here. here.
Never show this again