Polyphenolic Composition of Rosa canina, Rosa sempervivens and Pyrocantha coccinea Extracts and Assessment of Their Antioxidant Activity in Human Endothelial Cells
Next Article in Special Issue

Juglone (5-hydroxyl-1,4-naphthoquinone) is a phenolic compound found in walnuts. Because of the antioxidant capacities of phenolic compounds, juglone may serve to combat oxidative stress, thereby protecting against the development of various diseases and aging processes. However, being a quinone molecule, juglone could also act as a redox cycling agent and produce reactive oxygen species. Such prooxidant properties of juglone may confer health effects, such as by killing cancer cells. Further, recent studies revealed that juglone influences cell signaling. Notably, juglone is an inhibitor of Pin1 (peptidyl-prolyl cis/trans isomerase) that could regulate phosphorylation of Tau, implicating potential effects of juglone in Alzheimer’s disease. Juglone also activates mitogen-activated protein kinases that could promote cell survival, thereby protecting against conditions such as cardiac injury. This review describes recent advances in the understanding of the effects and roles of juglone in oxidative stress and cell signaling. View Full-Text
Keywords: antioxidants; juglone; naphthoquinone; Pin1; redox; signal transduction; walnuts antioxidants; juglone; naphthoquinone; Pin1; redox; signal transduction; walnuts
►▼ Show Figures 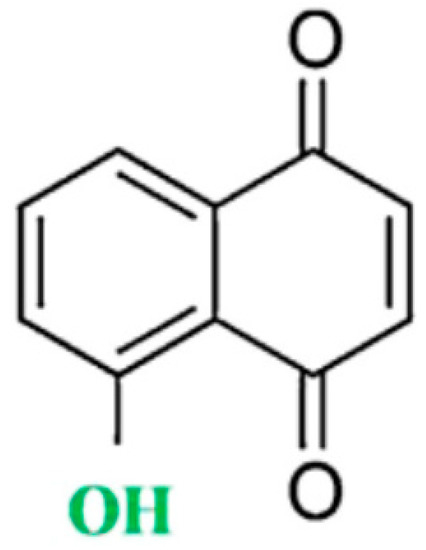