Spices and herbs, as good sources of polyphenols, could be strong inhibitors of advanced glycation end-product (AGE) formation. The aim of this research was to measure the ability of various spices to inhibit AGEs and to study the correlation of AGE inhibition with total phenolic (TP) content and antioxidant capacity. Fourteen spices commonly used in European cuisine were extracted with a 50% ethanol solution, and their water and total phenolic contents and antioxidant capacities were examined. Antioxidant capacity was evaluated using three methods: (1) Measurement of the radical scavenging ability of 2,2’-azino-bis-(3-ethylbenzothiazoline-6-sulphonic acid) (ABTS) and (2) 2,2-diphenyl-1-picrylhydrazyl (DPPH●); and (3) photochemiluminescence (PCL) assay. Antiglycation properties were studied in vivo using two model systems: Bovine serum albumin-glucose (BSA-glucose) and bovine serum albumin-methylglyoxal (BSA-MGO). The most potent glycation inhibitors, according to the BSA-MGO assay, were star anise (88%), cinnamon (85%), allspice (81%), and cloves (79%), whereas in the BSA-glucose measurement, oregano was noted to be a very effective inhibitor of the glycation process. The ability to inhibit glycation was highly correlated with TP values in the BSA-MGO and BSA-glucose assay (r = 0.84 and 0.76, respectively). Our research showed the high antiglycation ability of cinnamon, cloves, and allspice, and we suggest, for the first time, that anise could also be considered a good glycation inhibitor. View Full-Text
Keywords: spices; herbs; antiglycation activity; AGEs; antioxidants; total phenolic content; natural inhibitors spices; herbs; antiglycation activity; AGEs; antioxidants; total phenolic content; natural inhibitors
►▼ Show Figures 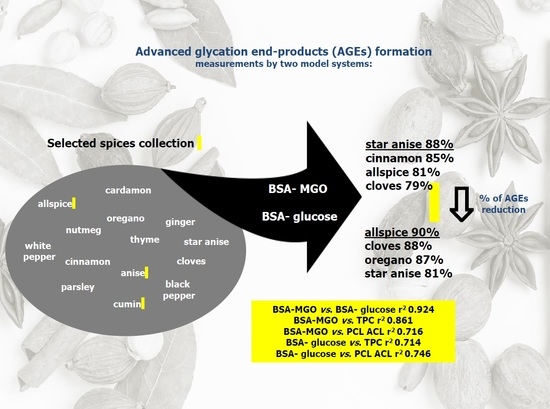