Antioxidants play an important role in wild animals with vitamin A and E, carotenoids, and coenzyme Q10 controlling reactive oxygen species [1,2]. Diet and food choice may influence antioxidant concentration, but in most bird species it is unclear whether they ultimately affect survival and reproduction. Hence, more research is needed. Diet and food choice will influence the concentration of antioxidants, and if they occur in limited supply, they may ultimately affect survival and reproduction. Nutritional requirements of birds change during the annual cycle, being the highest during the reproductive cycle just before laying because all resources required for adequate egg development are determined by pre-laying food acquisition [2,3]. In capital breeders like the common eider Somateria mollissima, the female spends the entire incubation period relying on resources stored before and during laying and incubation [4,5]. Within any given stage of life, the environments in which the capital breeders are located have profound effects on nutrition [3], as reflected in both the quantity and quality of food consumed to achieve an optimal diet and for maintenance of their body condition. In the wild, foraging is often the predominant activity in which a bird engages. For example, many migrating birds spend in excess of 80% of daylight hours during winter in search of food [3].
The balance between tissue antioxidants and prooxidants is responsible for normal embryonic development, but also for post-hatch offspring viability [1,2]. Avian maternal nutrition is the major determinant of the health and development of offspring before and also after hatching [2,6]. Previous studies have shown a significant transfer of antioxidants such as selenium [7] and carotenoids [8,9,10] from the maternal diet to progeny tissue. Extensive transfer of antioxidants from yolk to avian embryonic tissue takes place during the last week of embryonic development in line with increasing lipid unsaturation, with maximum transfer occurring just after hatching [11]. Studies of birds have suggested that low levels of antioxidants in females result in fewer eggs laid [12]. Moreover, increasing antioxidant supplementation to mothers resulted in more antioxidant transfer to eggs, with beneficial consequences for certain offspring traits [13]. Finally, antioxidant concentrations are higher in yolk than in maternal tissue, suggesting that these compounds are actively allocated from the mother to specific egg tissues [6,14,15]. The incorporation of antioxidants from yolk into the developing tissue of embryo and chick (e.g., liver, blood) may contribute to the antioxidant defense of the offspring [8,16,17,18,19]. Artificial injection of antioxidants into the egg has been shown to enhance acquired immunity with no apparent adverse consequences for other offspring traits (the first such experimental study was reported by Saino et al. [20]). Studies of poultry and fish in captivity have shown that egg antioxidants improve egg hatchability, body mass, and osteometric growth rates, immunity, behavior, and viability in the early post-hatch period [14,21].
Moreover, Vitamin E levels in day-old chick livers have been directly related to chick viability [8]. Coenzyme Q10 is a key component in the inner mitochondrial membrane, where it plays an important role in oxidative phosphorylation [22,23]. It is also present in plasma lipoproteins, where it acts as an important antioxidant [24]. Serum or liver malonaldehyde (MDA), which is a product of lipid peroxidation, was significantly decreased by coenzyme Q10 supplementation [25]. Coenzyme Q10 in its reduced form acts as a free radical scavenger [26], and it is preferred over α-tocopherol [27]. Coenzyme Q10 is involved in the prevention of lipid peroxidation and in the regeneration of other endogenous antioxidants [28]. There are only a few studies on the effects of feeding long-lived animals with dietary coenzyme Q10 and its distribution in the tissue [29]. Hence there is a need for additional research on the content of coenzyme Q10 in the natural diet, but also in tissues of wild birds.
Common eiders are capital breeders that build up their body reserves during winter for subsequent breeding [4]. When females arrive from the wintering grounds in Denmark to the breeding areas in the Northern Baltic during spring migration, they enter colonies and produce a clutch of 4–5 eggs that are incubated for about 26 days without the females leaving the nest to feed. Studies in the Wadden Sea show that wintering numbers of eiders are positively related to mussel stocks, and individuals feeding on mussels have better body conditions than those taking other types of prey, which makes it attractive for eiders to feed on mussel beds [30,31,32]. Blue mussel Mytilus edulis can affect the feeding conditions of eiders by increasing flesh content (a standard term for the amount of soft tissue in a mussel that can be consumed by eiders) and by increasing the size of mussel stocks.
The objectives of this study were (1) to quantify the interspecific allometric relationship between liver mass and body mass in order to assess the relative position of the common eider in terms of liver mass and to test whether common eiders have significantly larger livers than other species for a given body size, as expected from their strenuous diving habit; (2) to assess the relationship between liver size and concentrations of total antioxidants, vitamin E, vitamin A, and coenzyme Q10, respectively, and beak volume, which is the feature of the beak that affects the ability of individuals to capture larger prey, a larger amount and process a larger quantity of food. Thus, we predicted a positive relationship between the amounts of antioxidants and size of the beak. Objective (3) was to quantify the relationship between liver size and antioxidant concentrations, respectively, gizzard size and antioxidant concentration, and the relationship between liver size and antioxidant concentrations, respectively, and diet. We expect positive relationships if there is no trade-off between one category of antioxidants and another.

2.1. Liver Mass and Body Mass in Different Species of Birds

A colleague Johannes Erritzoe obtained and dissected the liver from 178 species of birds during 1960–2018 in Jutland, Denmark. Following removal of the liver, it was weighed on a precision balance scale to the nearest 0.01 g, as was the body mass of the same specimens.

We recorded morphological characters and liver samples for 162 eiders following collection by Danish hunters during winter and spring (10 February–11 May) 2016–2017 (2016: N = 56; 2017: N = 106). Dates for all measurements were in October (1 = 1 October) because molting is finished by the end of September. Eiders were weighed (with heavier individuals for a given body size being considered to be in better condition), sexed (81 males and 81 females), and aged. Livers were frozen immediately upon arrival at the lab, where they were subsequently analyzed. We included males and females because the values for females could then be compared with those for males that do not lay and incubate eggs. Females were aged up to the third calendar year, and males up to the sixth calendar year. All eiders were sexed and aged using standard plumage characteristics [33]. We recorded measurements of eiders in the laboratory and performed antioxidant analyses.
We recorded the number of blue mussels, cockles Cerastoderma edule, razor clams Ensis sp., other mussels, periwinkles Littorina littorea, draft whelks Nassarius reticulatus, conchs Buccinius undatum, beach crabs Carcinus maenas, and other items, in total nine categories from the 162 eiders in this study. Intact food items were identified to species or species groups and their maximum length measured (mm). For broken food items, we used a reference collection for identification and assessment of size (in 5 mm intervals). We estimated the mean and the maximum lengths for each prey group in each gizzard.
We obtained permits from the Ministry of the Environment, Denmark, to perform the study (SN-302-009, SNS-3446-00103, NST-3446-00018, NST-3465-00007).

Carotenoids, vitamins A and E, and coenzyme Q10 were extracted from liver samples as described before for fat-soluble antioxidants for the 162 eiders included in this study [34,35]. While total carotenoids may only have a weak antioxidant effect overall, we included a range of different antioxidants in order to search for the most important components. Briefly, about 200 mg liver sample was mixed with a 5% solution (w/v in H2O) of NaCl (0.7 mL) and ethanol (1 mL) and homogenized for 2 min. Hexane (2 mL) was added, and the mixture was further homogenized for 2 min. The hexane phase containing the carotenoids, Vitamins E and A, and coenzyme Q10 were separated by centrifugation, and the upper layer was collected. Extraction with 2 mL hexane was repeated twice, and the extracts were combined, evaporated, and re-dissolved in a mixture of methanol/dichloromethane (1:1 v/v). Samples were injected into a Shimatzu Prominence LC-20A Series-HPLC System (Istanbul, Turkey). Total carotenoids were identified by injecting 10-µl extracts into a Hypersil APS-2 5μ C18 reverse-phase HPLC column (25 cm × 4.6 mm, Phase Separations, Thermo Fisher Scientific, Waltham, MA, USA) with a mobile phase of methanol/water (97:3 v/v) at a flow rate of 1.5 mL/min. The HPLC was calibrated using standard lutein.
Vitamin E and A was identified using the same HPLC system with a Fluorescence Spectrofluorometer fitted with a Hypersil Gold 5μ C18 reverse-phase column (10 cm × 4.6 mm; Thermo, USA) and a mobile phase of methanol/water (97:3 v/v) at a flow rate of 1.05 mL/min and excitation and emission wavelengths of 295 and 330 nm. A standard solution of α-tocopherol and retinol in methanol were used for calibration. Coenzyme Q10 was analyzed by injecting 50 µL into the same HPLC system, but using a Vvdac 201TP54 column (5 µm, 25 cm × 4.6 mm, Radnor, PA, USA) and a mobile phase of ethanol/methanol/2-propanol (70:15:15 by volume), with a flow rate of 1.5 mL/min and PDA detection at 275 nm [36] and a standard coenzyme Q10 (Merck, Darmstadt, Germany) used for calibration.

We estimated the interspecific allometric relationship between log10-transformed mean liver mass and log10-transformed body mass across 178 species of birds (Figure 1). We reported summary statistics (mean (SE)) for liver mass and antioxidants. We estimated the correlation matrix between liver mass, body mass, and antioxidants. We estimated correlations among variables to avoid problems of multicollinearity. However, variance inflation factors were all less than 3, implying that there were no problems of collinearity [37].
We developed Generalized Linear Models (GLM) including all the main predictors and all two-way interactions. We included sex and age in these models to assess whether they caused significant heterogeneity, and if that was not the case, these variables were subsequently deleted. This backward selection procedure was continued until all two-way interactions were eliminated and all remaining predictors had associated p-values < 0.05.
Birds acquire their antioxidants through ingestion by the use of their beaks. Larger beaks ingest and process more food, and we should thus expect a positive association between the amount of antioxidants and beak volume. We tested these predictions using GLM with normally distributed data and an identity link function. Because large individuals generally have larger skeletal characters, and because concentrations of antioxidants are larger in larger individuals, we tested for a significant relationship between antioxidant levels and femur length as a measure of body size. All analyses were made using JMP [38].

A.P.M. initiated this study. A.P.M. made the statistical analyses. F.K. made the laboratory analyses. All authors wrote the paper.

We obtained funding from the 15 June Foundation.

We thank the Danish hunters for collecting eiders. We also thank Sezen Tayam for help with the extraction of livers. Johannes Erritzoe kindly provided information on liver mass. 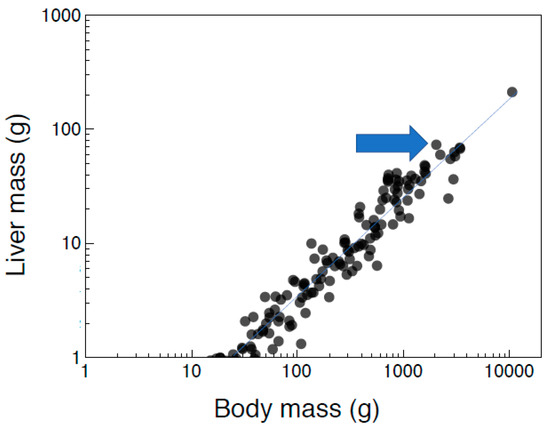