Although there are many antimicrobial proteins in plants, they are not well-explored. Understanding the mechanism of action of plant antifungal proteins (AFPs) may help combat fungal infections that impact crop yields. In this study, we aimed to address this gap by screening Oryza sativa leaves to isolate novel AFPs. We identified a thioredoxin protein with antioxidant properties. Being ubiquitous, thioredoxins (Trxs) function in the redox balance of all living organisms. Sequencing by Edman degradation method revealed the AFP to be O. sativa Thioredoxin m-type isoform (OsTrxm). We purified the recombinant OsTrxm and its cysteine mutant proteins (OsTrxm C/S) in Escherichia coli. The recombinant OsTrxm proteins inhibited the growth of various pathogenic fungal cells. Interestingly, OsTrxm C/S mutant showed higher antifungal activity than OsTrxm. A growth inhibitory assay against various fungal pathogens and yeasts confirmed the pertinent role of cysteine residues. The OsTrxm protein variants penetrated the fungal cell wall and membrane, accumulated in the cells and generated reactive oxygen species. Although the role of OsTrxm in chloroplast development is known, its biochemical and molecular functions have not been elucidated. These findings suggest that in addition to redox regulation, OsTrxm also functions as an antimicrobial agent. View Full-Text
Keywords: OsTrxm; active cysteine; antifungal protein; rice; pathogen OsTrxm; active cysteine; antifungal protein; rice; pathogen
►▼ Show Figures 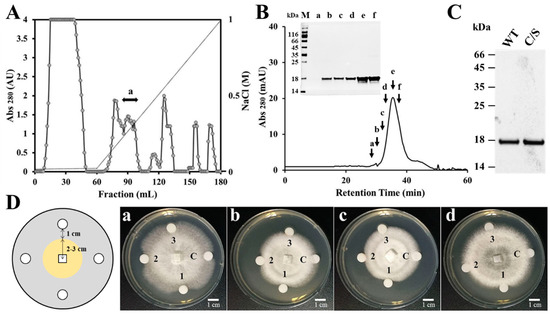