The current investigation was undertaken to examine saffron processing waste (SPW) as a bioresource, which could be valorized to produce extracts rich in antioxidant polyphenols, using a green, natural deep eutectic solvent (DES). Initially, there was an appraisal of the molar ratio of hydrogen bond donor/hydrogen bond acceptor in order to come up with the most efficient DES composed of L-lactic acid/glycine (5:1). The following step was the optimization of the extraction process using response surface methodology. The optimal conditions thus determined were a DES concentration of 55% (w/v), a liquid-to-solid ratio of 60 mL g−1, and a stirring speed of 800 rounds per minute. Under these conditions, the extraction yield in total polyphenols achieved was 132.43 ± 10.63 mg gallic acid equivalents per g of dry mass. The temperature assay performed within a range of 23 to 80 °C, suggested that extracts displayed maximum yield and antioxidant activity at 50–60 °C. Liquid chromatography-mass spectrometry analysis of the SPW extract obtained under optimal conditions showed that the predominant flavonol was kaempferol 3-O-sophoroside and the major anthocyanin delphinidin 3,5-di-O-glucoside. The results indicated that SPW extraction with the DES used is a green and efficient methodology and may afford extracts rich flavonols and anthocyanins, which are considered to be powerful antioxidants. View Full-Text
Keywords: anthocyanins; antioxidants; deep eutectic solvents; extraction; polyphenols; saffron anthocyanins; antioxidants; deep eutectic solvents; extraction; polyphenols; saffron
►▼ Show Figures 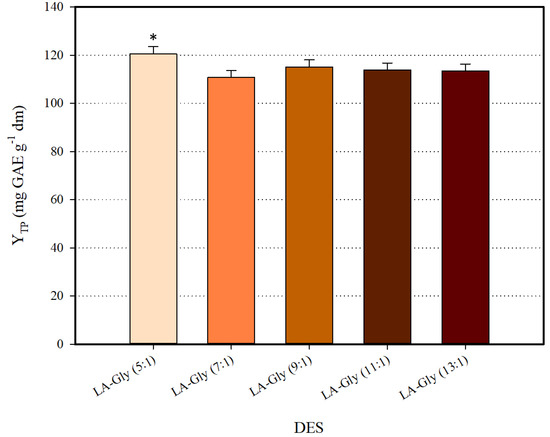