Exploring the Antioxidant Features of Polyphenols by Spectroscopic and Electrochemical Methods

White tea is a slightly fermented tea and is one of the six major teas in China. The raw material of white tea is the bud tip of the tea plant. White tea is light green and covered with frost. The tea soup is also lightly colored; thus, it is called white tea [1]. White peony is mainly produced in regions of Fujian Province, China. Its green leaves contain silver and white hearts in a flower shape. After brewing, the green leaves retain the buds and look like peony blossoms, which suggested the name white peony [2]. White tea possesses bioactivity. It cools the body, moistens the lungs, benefits the blood, has anti-inflammatory and detoxification effects, reduces blood pressure and fat, and decreases tiredness [3,4,5]. The polyphenols in white tea can protect the liver, accelerate the decomposition of the alcohol metabolite acetaldehyde, generate nontoxic substances, and reduce damage to liver cells. White tea can also affect the increased serum lactate dehydrogenase induced by hepatocellular injury, inhibit hepatic M cell collagen fiber formation, help protect the liver, greatly reduce alcohol damage to the liver, and rapidly restore the normal liver function [6].
Alcoholic liver disease is caused by long-term heavy drinking, manifests as fatty liver, and further develops into alcoholic hepatitis, liver fibrosis, and cirrhosis. Its main clinical features include nausea, vomiting, jaundice, hepatomegaly, and tenderness, combined with liver failure and upper gastrointestinal bleeding [7]. Severe drinking may induce extensive hepatocyte necrosis and even liver failure. Alcoholic hepatitis is a common liver disease that severely threatens patients’ health. Alcoholic liver injury results from interactions between inflammatory reactions, oxidative stress, enterogenous endotoxins, and inflammatory mediators that are either directly or indirectly induced by alcohol and its derivatives during metabolic processes [8]. The main metabolic pathway of alcohol is in the liver and requires different subcellular organelles. Alcohol is metabolized by the enzyme alcohol dehydrogenase in the endoplasmic reticulum of the microsomal ethanol oxidation system and by aldehyde oxidase in the mitochondria [9]. The process generates reactive oxygen species (ROS), including superoxide anions, hydroxyl radicals, and hydrogen peroxide. ROS accumulation in the liver leads to functional disorders of the cell membrane, protein and DNA oxidation, and finally hepatocellular injury [10]. Initially, alcohol increases ROS via oxidative stress and induces fat accumulation in the liver. Under the effects of oxidative stress-related lipid peroxidation and inflammatory cytokines, hepatocytes with steatosis undergo a second attack, followed by inflammation, necrosis, and fibrosis [11].
Silymarin is a natural active substance extracted from the dried fruit of the plant silymarin and can protect liver cells from toxic substances, especially alcohol; at the same time, it has a strong antioxidant function, can protect liver cells from free radical damage, and its effect is far better than that of vitamin E; it can also promote the synthesis of proteins, accelerate the production of new liver cells, and repair liver cells [9]. Therefore, silymarin was used as a positive control in this study. White tea possesses antioxidant effects and enhances immunity. In this study, we investigated the effect of white peony (a type of white tea) containing polyphenols on alcoholic liver injury, examining its ability to regulate oxidative stress in mice. The polyphenols present in white peony were also identified to explain the mechanism of action of this tea against alcoholic liver injury.

2.1. Extraction of White Tea Polyphenols and Evaluation of the Antioxidant Activity in Vitro

One kilogram of freeze–dried white peony tea (Fuding Jinye Tea Industry Co., Ltd., Fujian, China) was weighed, ground, and divided into 10 samples. An alcohol solution (70% v/v) was added to each sample, and extraction was carried out for 4 h in a water bath at 70 °C, followed by filtration. The filtered solution was collected and refiltered through kieselguhr to remove fat-soluble impurities. The filtered solution was collected again and passed through a column of HP20 resin (Cool Chemical Technology Co., Ltd., Beijing, China) to adsorb the polyphenols present in broadleaf holly leaves. Subsequently, a 70% alcohol solution (v/v) was used to elute the resin and dissolve the adsorbed polyphenols on the resin. Finally, a white peony polyphenol (WPP) extract was obtained by evaporating the alcohol in a rotary evaporator. The scavenging capability of WPP on 2,2-diphenyl-1-picrylhydrazyl (DPPH) and 2,2’-azino-bis(3-ethylbenzothiazoline-6-sulfonic acid) (ABTS) free radicals was detected in vitro following a previously described method [12].

Fifty 6-week-old male specific-pathogen-free Kunming mice (Experimental Animal Center of Chongqing Medical University, Chongqing, China) were acclimated for 1 week and assigned to normal, model, WPP low-concentration (WPPL), WPP high-concentration (WPPH), or silymarin groups (n = 10 per group). During the experiment, the mice were allowed to eat and drink freely for 8 weeks. The mice in the WPPL and WPPH groups were fed WPP at 50 mg/kg and 100 mg/kg per day, respectively. Those in the silymarin group were given silymarin by gavage at 100 mg/kg per day. All mice except those in the normal group received 50% alcohol (v/v) daily at 0.1 mL/10 g body weight. After 8 weeks, all mice were fasted for 24 h, then sacrificed. Blood was taken from the heart, and the livers were removed for subsequent experiments. The liver tissues were weighed, and the liver index was calculated per a previously established formula (liver index = liver weight/body weight × 100) [13]. The protocol for these experiments was approved by the Ethics Committee of Chongqing Collaborative Innovation Center for Functional Food (201807005B), Chongqing, China.

2.3. Determination of Biochemical Indicators in Serum

The liver tissues (0.5 cm2) were fixed in 10% formalin for 48 h, dehydrated, cleared in xylene, immersed in wax, embedded, sectioned, and stained with hematoxylin and eosin. The tissue morphology was observed under an optical microscope (BX43 microscope, Olympus, Tokyo, Japan).

Ten milligrams of the WPP sample was weighed, dissolved in 1 mL dimethyl sulfoxide (DMSO), and heated at 60 °C for 30 min in a water bath. The sample was then removed, and 1.5 mL of pure water and 1.5 mL of ethanol (high-performance-liquid-chromatography [HPLC] grade) were added. The sample was heated in a water bath at 60 °C for 10 min, centrifuged at 2000 rpm for 5 min, and filtered through a 0.22 μm filter membrane. The main components and WPP contents were determined via HPLC (UltiMate3000 HPLC System, Thermo Fisher Scientific). Mobile phase A was water containing 0.5% acetic acid, and mobile phase B was acetonitrile. The flow rate was 0.5 mL/min, with a column temperature of 30 °C, and the detection wavelength was 328 nm. The gradient elution conditions were as follows: equilibrium stage was set for 10 min with 12% B (isocratic), then 0–30 min with 12–45% B (linear gradient), 30–35 min with 45–100% B (linear gradient), and 35–40 min with 100% B (isocratic).

All serum and tissues tests were performed in triplicate. The data were averaged and analyzed using Statistical Package for the Social Sciences (SPSS, Chicago, Illinois, IL, USA) software. One-way analysis of variance was used to analyze the data, and p < 0.05 was considered statistically significant.

3.1. Antioxidant Effects of WPPs in Vitro

During the experiment, the weight of the mice in each group increased normally, there was no significant difference (p > 0.05) between the weight of the mice in each group, and none of the mice died. (Figure 2). The liver index was the highest in the model group and the lowest in the normal group (Table 2). The liver index of the model group was 2.15 times as high as that of the normal group; after WPP and silymarin treatment, the liver indexes decreased in mice with liver injury, and the effect of a high concentration of WPP (WPPH) was similar to that of silymarin (no significant difference between them, p > 0.05); the reduction of the liver index was significantly (p < 0.05) greater for WPPH than when administering low-concentration WPP (WPPL).

Interluekin-6(IL-6), IL-12, tumor necrosis factor-alpha (TNF-α), and interferon-gamma (IFN-γ) levels in the normal group were significantly lower than those in the other groups (p < 0.05), but those in the model group were significantly higher than those of the other groups (p < 0.05; Table 5). WPP effectively reduced the serum levels of IL-6, IL-12, TNF-α, and IFN-γ in mice with liver injury, and the effect of WPPH was similar to that of silymarin.

Liver tissue cells in the normal group were normal in structure, and the hepatocytes were radially distributed around the central vein (Figure 3). In the model group, the cells were nonuniformly arranged, the central veins were irregular, and the cell structure was destroyed, showing much cellular necrosis. Both WPP and silymarin alleviated alcohol-induced hepatocyte necrosis and incomplete morphology in the liver tissues. WPPH had the best effect, which was similar to that of silymarin.

3.7. Expression of nNOS, eNOS, and iNOS in the Liver of Mice

Mn-SOD, Cu-Zn-SOD, and CAT mRNA and protein expressions in the liver tissues were the highest in the model group, while iNOS expression was the lowest (Table 7 and Figure 5). Silymarin administered by gavage significantly upregulated Mn-SOD, Cu-Zn-SOD, and CAT expression levels in the livers of mice with liver injury. WPP also upregulated their expression, and the effect of WPPH was greater but did not differ significantly from that of silymarin (p > 0.05).

3.9. Analysis of the Chemical Composition of WPPs

In our study, WPPs reduced the liver indices of mice with liver injury and regulated the related serum levels and the inflammation-related cytokine levels, returning them to normal values. qPCR and western blot further demonstrated that WPPs effectively restored the mRNA and protein expression levels of various liver injury markers in the livers of mice with liver injury. Thus, WPPs have a good attenuating effect on alcoholic liver injury, and their efficacy is similar to that of silymarin. WPPs are a promising natural resource. The possible synergistic effect between the key polyphenols in WPPs should be further investigated.

Y.Z. and F.T. performed the majority of the experiments and wrote the manuscript; C.L., W.L. (Wenfeng Li), W.L. (Wei Liao), Q.L., and G.Q. contributed to the data analysis; W.L. (Weiwei Liu) and X.Z. designed and supervised the study and checked the final manuscript.

This research was funded by the Program for Innovation Team Building at Institutions of Higher Education in Chongqing [CXTDX201601040], China. 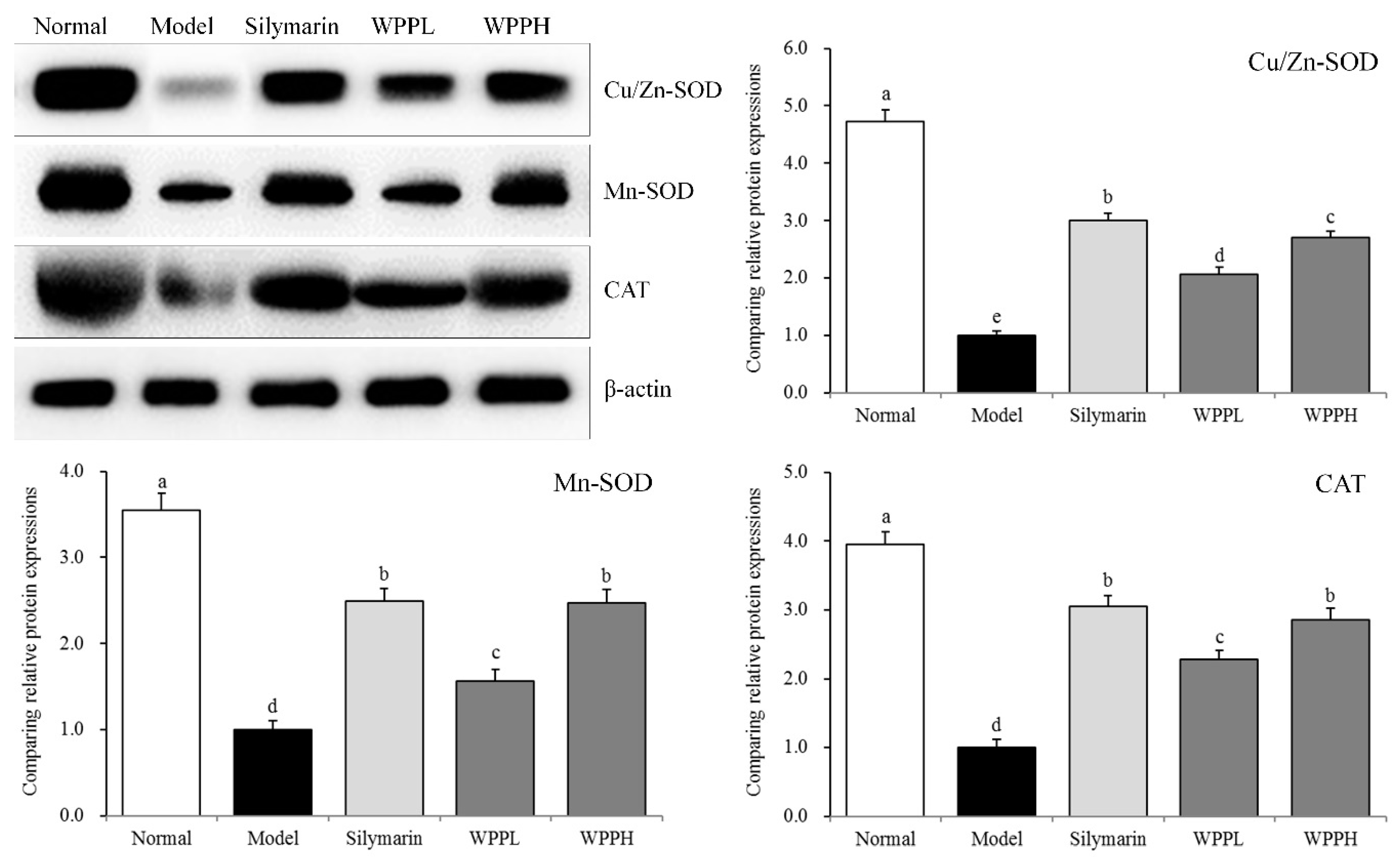