S-allylmercaptoglutathione Is a Substrate for Glutathione Reductase (E.C. 1.8.1.7) from Yeast (Saccharomyces cerevisiae)

The Asteraceae family is economically very important, because many of these plants are grown mainly for their food value, such as lettuce (Lactuca), chicory (Cichorium), and sunflower (Heliantus aminus). One of the typical properties of this family, which includes milk thistle (Sylibum marianum), is the richness of the oil in various compounds (flavonoids, alkaloids, tocopherols, and unsaturated fatty acids). Currently, and for the coming decades, age-related diseases, including neurodegenerative diseases, are a major public health problem. Preventing their appearance or opposing their evolution is a major objective. In this context, the cytoprotective activities of milk thistle seed oil produced in Tunisia were studied on the 158N model using 7-ketocholesterol (7KC) and 24S-hydroxycholesterol (24S) as cytotoxic agents. 7KC and 24S were used because they can be increased in the brain and body fluids of patients with major age-related neurodegenerative diseases, such as Alzheimer’s and Parkinson’s diseases. In order to evaluate the cytoprotective properties of milk thistle seed oil, complementary techniques of microscopy, flow cytometry, and biochemistry were used. The chemical composition of milk thistle seed oil has also been determined by various chromatography techniques. Milk thistle seed oils from different area of Tunisia are rich in tocopherols and are strongly antioxidant according to various biochemical tests (KRL (Kit Radicaux Libres), FRAP (Ferric Reducing Antioxidant Power), and DPPH (2,2-diphenyl-1-picrylhydrazyl)). The main fatty acids are linoleic acid (C18:2 n-6) and oleic acid (C18:1 n-9). The main polyphenols identified are homovanillic acid, p-coumaric acid, quercetin, and apigenin, with a predominance of vanillic acid. On 158N cells, milk thistle seed oil attenuates the cytotoxicity of 7KC and 24S including: loss of cell adhesion, increased plasma membrane permeability, mitochondrial dysfunction, overproduction of reactive oxygen species, induction of apoptosis, and autophagy. The attenuation of the cytotoxicity of 7KC and 24S observed with the milk thistle seed oil is in the order of that observed with α-tocopherol used as a positive control. In the presence of nigella seed oil, considered potentially cytotoxic, no cytoprotective effects were observed. Given the chemical characteristics, antioxidant properties, and cytoprotective activities of milk thistle seed oil, our results highlight the potential benefit of this oil for human health. View Full-Text
Keywords: 158N murine oligodentrocytes; milk thistle seed oil; Silybum marianum; 7-ketocholesterol; 24S-hydroxycholesterol; cytoprotection 158N murine oligodentrocytes; milk thistle seed oil; Silybum marianum; 7-ketocholesterol; 24S-hydroxycholesterol; cytoprotection
►▼ Show Figures 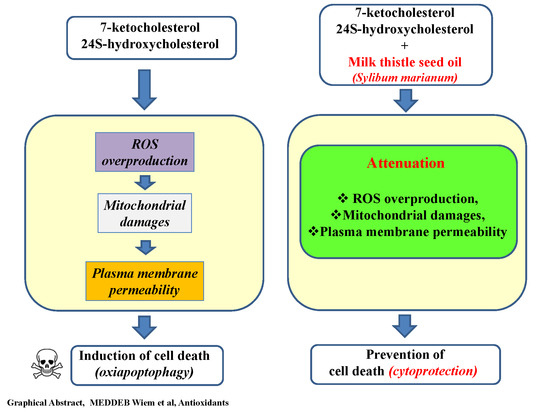