Identification of Modulators of the C. elegans Aryl Hydrocarbon Receptor and Characterization of Transcriptomic and Metabolic AhR-1 Profiles
Next Article in Special Issue

Doxorubicin (DOX), an anthracycline antibiotic, has been applied as an effective anti-cancer therapy since 1969 [1,2]. Despite its potent anti-cancer properties, the clinical usefulness of DOX in cancer chemotherapy is limited by its severe consequences on non-targeted organs, including the kidneys, liver, and brain [3]. DOX was reported to raise the permeability of glomerular capillaries and atrophy of the glomeruli in rat kidneys [4]. After DOX accumulation, severe glomerular damage was produced due to oxidative stress [5]. Lipid peroxidation and diminished antioxidant enzyme activity are common mediators promoting nephrotic syndrome [6]. Inflammation plays an influential role in renal damage exhibited by DOX through cytokines and other cytotoxic factors [7]. Protein excretion due to renal failure is primarily associated with damage to the filtration barrier [7]. This filtration barrier deterioration is caused by DOX [8]. Several researchers reported that DOX caused alterations in the kidney function parameters. Manal et al. (2019) published that DOX caused significant increases in creatinine and urea levels [9]. DOX causes oxidative stress in kidney tissues characterized by low antioxidant enzyme activity and enhanced malondialdehyde activity [10]. DOX-induced nephrotoxicity causes increased vascular porousness and glomerular contraction. It is marked by increased kidney functions and raised lactate dehydrogenase activity, along with decreased renal Ca2+- ATPase, Mg2+-ATPase, and Na+, K+-ATPase rates [11,12]. Natural antioxidants reduce harmful side effects and improve the antitumor activity of anti-cancer medications [13,14,15]. Different studies have demonstrated that a diet high in honey and bee products (propolis and royal jelly) provides significant health benefits against various diseases due to their antioxidant properties [16,17].
Honey is a naturally occurring food that is produced by bees. It is known worldwide for its great nutrient ingredients beneficial to humans. Major sugars and vitamins, phenolic acids, minerals, and phytochemicals are found in honey. Egyptians, Greeks, Romans, and Chinese have all utilized honey to treat wounds and intestinal disorders, including gastric ulcers. It has also been used to treat earache, coughs, and sore throats [18,19]. Honey has lately been used for its anti-inflammatory, antimicrobial, and antioxidant activities and for enhancing the immune response [20]. Honey’s biological activity can be related to its polyphenolic content, linked to its antioxidant and anti-inflammatory properties, and its cardiovascular, anti-proliferative, and antibacterial benefit [21,22].
Royal jelly is made from the mandibular glands and hypopharyngeal of worker honeybees as a milky secretion [23]. It contains royalactin proteins, monosaccharides, lipids, fatty acids, minerals, free amino acids, and vitamins. Antitumor, anti-inflammatory, antioxidant, hypoglycemic, and hypo-cholesterolemic actions are considered biological benefits of royal jelly [24,25].
Propolis, another defense product from the bee, is collected from different plant sources. Additionally, propolis has several biological properties, including antioxidant and free radical scavenger action, antimicrobial activity against a broad spectrum of pathogens, anti-malignant action, anti-inflammatory activities, and immune-boosting properties by promoting numerous pro-inflammatory cytokines [19]. Propolis was reported to enhance the protective effect on kidney failure induced by paracetamol, carbon tetrachloride, and Doxorubicin [26,27]. The current study aims to assess the preventive roles of natural honey, royal jelly, and propolis administration, both alone and combined, on Dox-induced renal toxicity. The biochemical, histopathological, immunohistochemical, and gene expression modifications in albino rats were examined.

The protocol of the Institutes of Health (NIH) and the Commission for Control and Supervision of Experiments on Animals (CPCSEA) (registration number: 13/165) were performed in our experimental animal study. Our research was conducted in the biology lab of Ain Shams University’s Department of Zoology, Faculty of Women for Arts, Science, and Education. The rats used in this investigation were 42 adult male albino rats weighing (150–160 g). Rats were kept in a properly ventilated room and exposed to natural light (12:12 h light-dark cycle). In the laboratory, the animals were housed in metabolic labeled cages at a constant temperature of 25 °C. They had unrestricted access to conventional dry pellet food and water. They were acclimated for a week before the experiment started.

Doxorubicin (DOX) hydrochloride 10 mg vial (Pharmacia Italia, Milano, Italy) was injected intraperitoneally in six equal doses (i.p., 3 mg/kg b.w.) for six weeks (one dosage each week for a total dose was18 mg/kg b.w.) as previously described [28]. All other chemicals and reagents used were of analytical grade.

Forty-two male albino rats were divided into six groups of seven animals each. The control group (NG) was given saline; the Doxorubicin group (DOX-G) was administrated with a single dose of 3 mg/kg/week i.p. of DOX for six weeks for kidney toxicity induction; the Dox plus honey treated group (DOX-H) was introduced with DOX (single dosage of 3 mg/kg/week i.p. for six weeks) and on the next day receiving 500 mg/kg/day of honey orally for 21 days; the Dox plus royal jelly treated group (DOX-R) treated with DOX (only one dose 3 mg/kg/week i.p. for six weeks) and on the next day treated orally with 100 mg/kg/day royal jelly for 21 days; the Dox plus propolis treated group (DOXP) received DOX (single dose 3 mg/kg/week i.p.) and on the next day treated orally with 50 mg/kg/day propolis for 21 days; the Dox plus honey, royal jelly, and propolis combined group (DOXHRP) received DOX (15 mg/kg, i.p.) and on the subsequent day treated with 500 mg/kg/day of honey, 100 mg/kg/day Royal jelly, and 50 mg/kg/day propolis orally for 21 days.
At the end of the experiment, non-heparinized capillary tubes were used to collect blood samples from the retro-orbital plexus. To analyze kidney functions, serum specimens were produced after centrifuging for 20 min and collecting the supernatants. The kidneys were promptly divided and cleaned with saline after decapitating the rats. One portion of the kidney was homogenized in phosphate-buffered saline and centrifuged to prepare 25% w/v tissue homogenates. After that, the supernatants were collected and kept at −80 °C until analysis. For histopathology and immunohistochemistry examination, another kidney section was rinsed with saline and then put in 10% formal saline. The third part was kept at −80 °C in trizol for gene expression analyses.

Dissected renal tissue samples were rinsed in normal saline and fixed in 10% saline for 72 h. After that, the specimens were cut and dried in alcohol, then cleared in xylene, filtered in wax, and finally blocked out into Paraplast tissue embedding media. A rotatory microtome was used to cut 5 µm thick sections of each sample. According to the previously reported methodology, the sections were stained with hematoxylin and eosin (H&E) stain [36]. Slides were examined under a microscope at 400× magnification.

Caspase 3 antibodies were stained immunohistochemically at dilution (1:50) and on 4-μm, paraffin-embedded sections. Antigen retrieval in all samples was accomplished by heating the plates for 30 min in a solution of EDTA (1-mmol/L, pH 8.0), followed by endogenous biotin inhibition. Staining with an automated immune Stainer (DAKO) was performed, then detected with a streptavidin-biotin detection system. Additionally, positive and negative control sections were applied.

The SPSS program version 25 (IBM Corp., Armonk, NY, USA) was used to analyze the obtained data statistically. The mean and standard error were used to summarize our data. For comparisons between groups, variance analysis (ANOVA) was used with a multiple comparisons post hoc test for every two groups.

The findings in Figure 1A,B show that serum creatinine and urea levels in the DOX group were significantly higher (p ≤ 0.05) than in the control group. However, compared to the DOX group, treatment of H, R, or P alone or a mixture of H, R, and P led to a substantial reduction (p ≤ 0.05) in the serum urea and creatinine levels.

The present study detects changes in the mRNA expression levels of two genes as molecular biomarkers using real-time PCR. The inflammatory impact and anti-apoptotic effect of DOX and treatment with honey, royal jelly, and propolis were detected in kidney tissues. A statistically significant (p ≤ 0.05) increase in PARP-1 gene expression was determined after DOX injection compared to the control group (5.5, 1.06, respectively). The protective effect of honey, propolis, and royal jelly treatment was detected in the significant downregulation (p ≤ 0.05) of the PARP-1 gene expression level, whereas highly significant (p ≤ 0.01) downregulation was demonstrated after combined treatment of honey, royal jelly, and propolis as compared to the DOX group (4.3, 4.7, 3.9, 2.6, 5.5, respectively). The apoptotic molecular biomarker Bcl2 showed significant downregulation of Bcl2 gene expression after treatment with DOX (1.3) compared to the control group (5.9). Treatment with honey, propolis, and royal jelly after nephrotoxicity induction with DOX resulted in a significant (p ≤ 0.05) increase in Bcl2 mRNA expression and was highly significant with a combined honey, royal jelly, and propolis treatment as compared with the DOX group (1.7, 1.8, 1.9, 2.4, 1.3, respectively) (Figure 6).

We conclude that the administration of honey, propolis, and royal jelly significantly enhanced and resolved the renal injuries and toxicity that took place after the Doxorubicin injection. The mitigation of renal damage was in the significant improvement of kidney function assays, renal histopathology and immunohistochemistry, and mRNA of Bcl-2 and PARP-1 expression levels. Furthermore, the combined treatment significantly inhibited nephrotoxicity induced by DOX compared to the honey, propolis, and royal jelly alone. These natural products induce antioxidant effects, prevent oxidative stress, and enhance the expression level of anti-apoptotic genes.

This work was funded by the Deanship of Scientific Research at Jouf University under grant No (DSR-2021-01-03146). 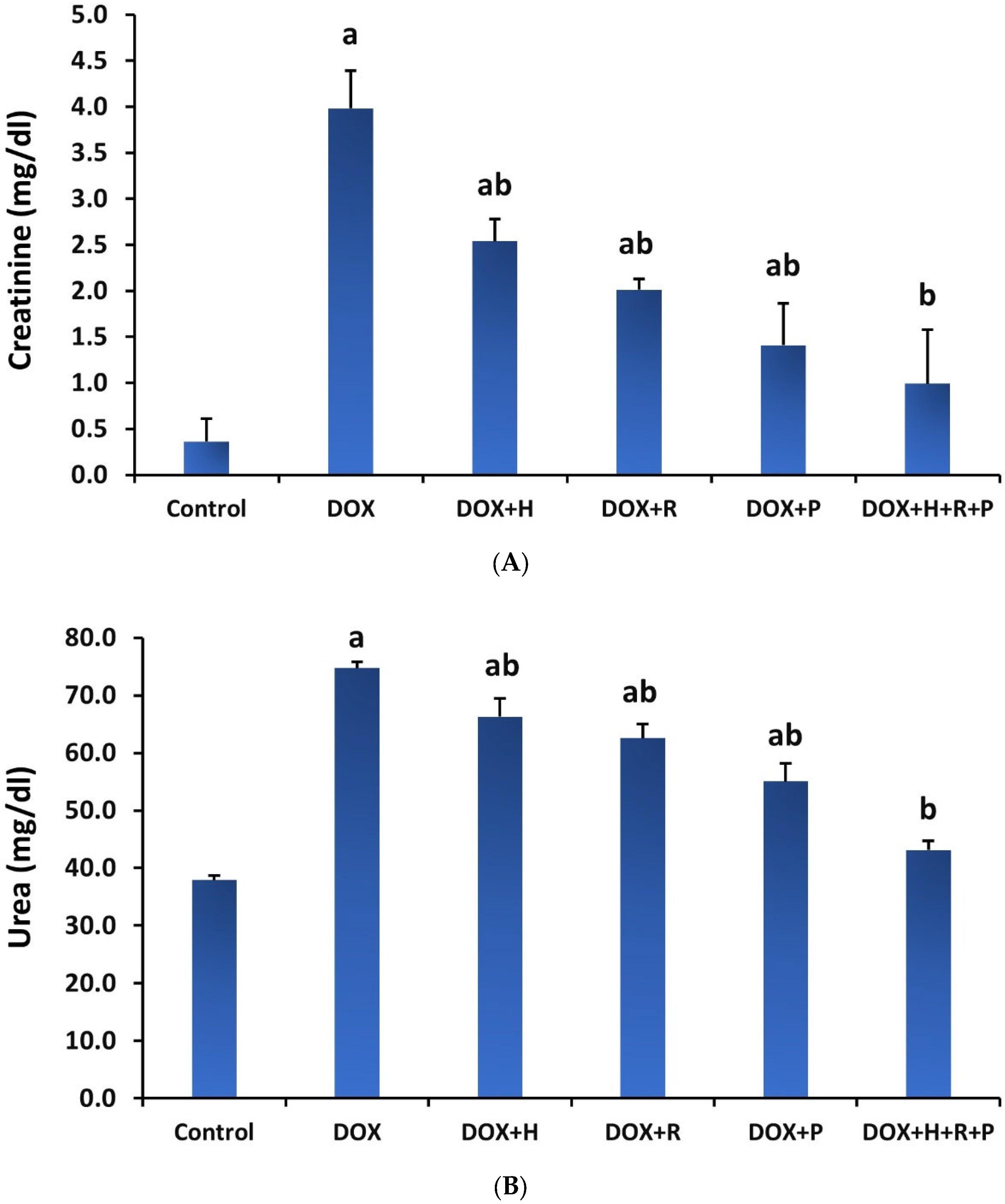 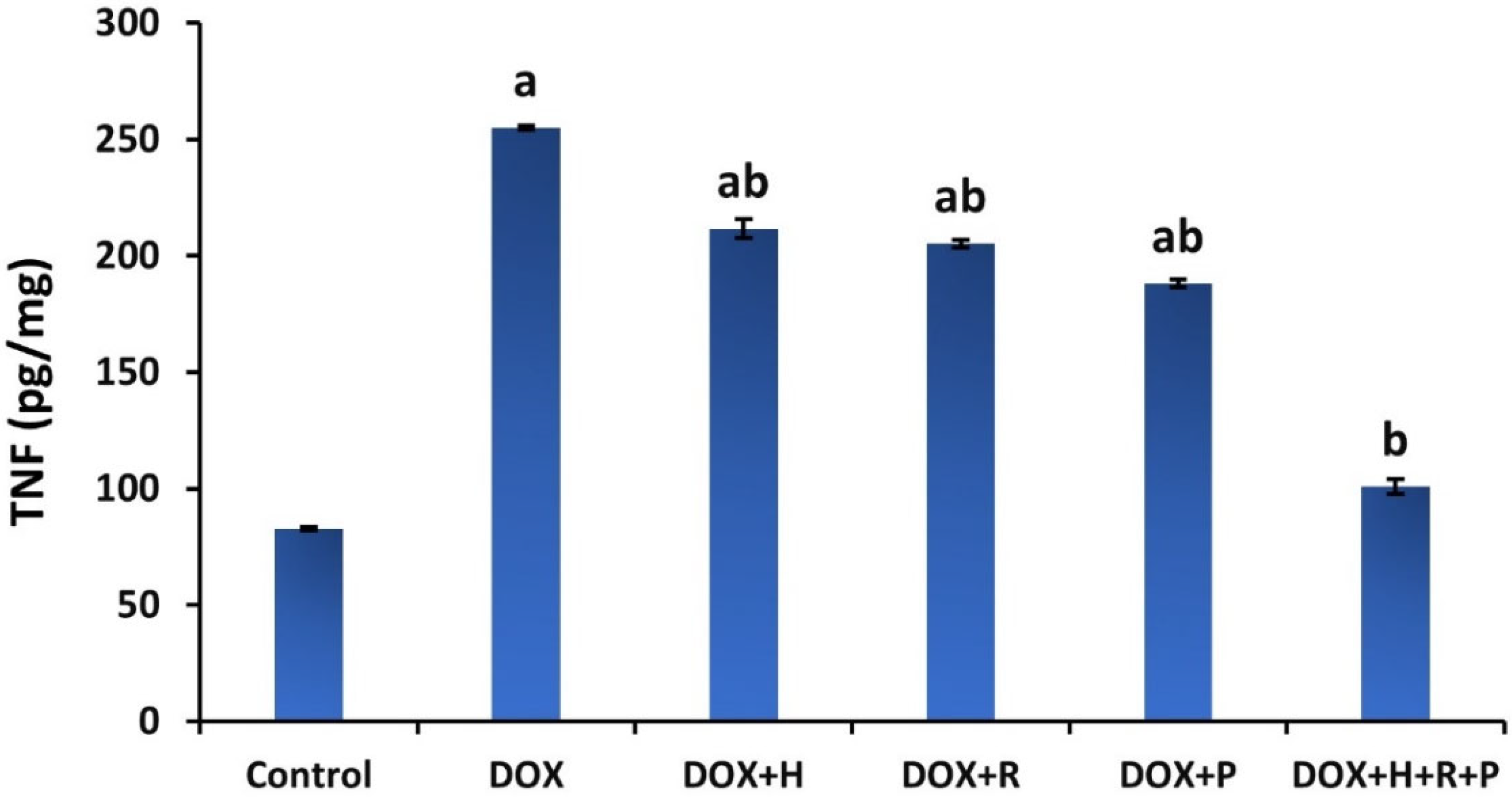 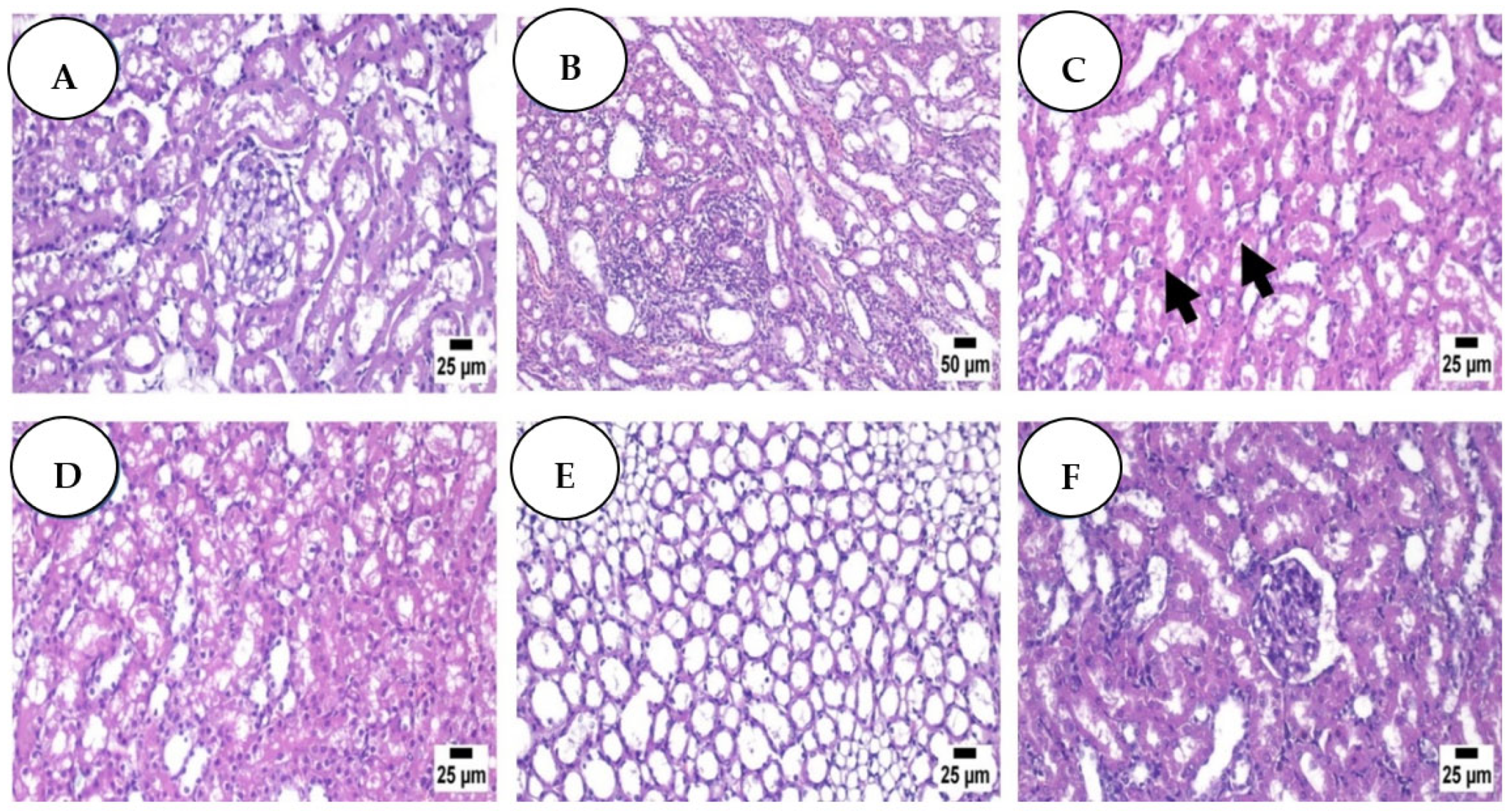