Early life exposure to particulate matter (PM) air pollution is linked with numerous adverse developmental outcomes, impacting global neonatal morbidity and mortality, and increasing risk for chronic health effects later in life [1,2]. PM is classified by size into coarse (PM10, <10 µm), fine (PM2.5, <2.5 µm), and ultrafine particles (UFPs, diameter < 0.1 µm). The World Health Organization recently lowered its guideline values for PM10 and PM2.5 aimed at promoting reduced risks for acute and chronic health effects [3]. Conversely, no guidelines or regulations exist for UFPs. The small diameter of the UFPs allows for a deeper penetration into airways, the ability to translocate systemically, and a higher surface area to volume ratio that allows increased absorption of potentially toxic chemicals generating systemic oxidative stress responses [4]. Evidence from experimental models and human placentae demonstrates UFPs can cross the placental barrier into fetal circulation [5,6].
Since fetal development is a period of rapid differentiation and growth, in utero exposure to UFPs, and also more broadly PM, represents a unique window of susceptibility. Prenatal exposure to PM10 and PM2.5 has been consistently linked with preterm birth, infant low birth weight [7,8,9], and respiratory morbidities, including risks for respiratory infection and childhood asthma [10,11,12]. Emerging evidence supports prenatal UFP exposure is independently linked with childhood asthma incidence [13,14]. Additional observation studies demonstrate early life exposure to various PM fractions, including organic carbon and sulfates, and particles in size fractions of 5–560 nm mainly from traffic emissions, are associated with increased risk of hospitalization for respiratory infections among children in the U.S. and in China [15,16]. In the latter study, significant associations of respiratory emergency room visits were also found to be associated with secondary aerosols and emissions from gasoline and diesel vehicles. Findings from a birth cohort study in Korea demonstrate increased susceptibility of lower respiratory tract infections in infants prenatally exposed to PM2.5 and second-hand smoke was significantly modified by polymorphisms in maternal genes related to oxidative stress response pathways, especially in the nuclear factor erythroid 2-related factor (Nrf2) gene.
Nrf2 regulates and enhances the cellular response to oxidative stress [17]. A transcription factor in the Cap n’ Collar family with a basic leucine zipper, Nrf2 is bound in the cytoplasm by the Keap1-Cul3 complex [18,19]. In traditional canonical activation, oxidative stress initiates the oxidization of cysteine residues of the dimerized Keap1 protein, altering its conformation to prevent it from binding Nrf2. The freed Nrf2 translocates to the nucleus, where it binds an antioxidant response element (ARE) upstream numerous antioxidant-related genes [18]. In experimental models, disruption of Nrf2 has been shown to enhance susceptibility to allergic airway inflammatory responses induced by chronic exposure to diesel exhaust particulate matter [20]. While the role of Nrf2 in standard, adult exposure models is well-studied, the impact of Nrf2 signaling in maternal and fetal responses to in utero PM exposure, especially the ultrafine fraction, is yet to be clarified.
Therefore, to evaluate the effect of UFP exposure during pregnancy on neonatal outcomes in a model lacking an appropriate oxidative stress response, we exposed Nrf2 deficient (Nrf2−/−) and wildtype (WT) dams to filtered air (control) or aerosolized ultrafine PM containing diesel exhaust. We evaluated the neonatal pulmonary immunophenotype and state of oxidative stress.

Diesel Particulate Matter Standard Reference Material (SRM 2975) was purchased from the National Institute of Standards and Technology (Gaithersburg, MD, USA). All other chemicals and reagents used were obtained commercially at the highest available purity. PM generation followed methods developed by Rychlik et al. [21], with adaptations to accommodate individual housing within whole body exposure chambers, as described by Behlen et al. [22] Briefly, HEPA filtered air was continuously pumped into two separate chambers (FA and PM) where pregnant dams were individually housed. For the PM chamber, UFPs were generated using a custom-built constant output atomizer. We employed a multicomponent aerosol mixture consisting of ammonium nitrate, ammonium sulfate, diesel exhaust PM (NIST, SRM 2975), and potassium chloride, with the mass fractions of 44, 39, 10, and 7%, respectively. Real-time particle size distribution was monitored using a differential mobility analyzer (DMA) in tandem with a condensation particle counter (CPC). The flowrate of HEPA-filtered air was adjusted to ensure consistent particle concentrations ~100 µg/m3 within chambers throughout the exposure duration. This dose was selected based on previous findings from our research showing neonatal immune suppression [21] and marked placental changes [22].
Nrf2-deficient mice (Nrf2−/−) on C57Bl/6J background were obtained from Dr. Tom Kensler, which were generated as previously reported [23]. Genotyping for homozygous wildtype (Nrf2+/+) and null (Nrf2−/−) mice was carried out following established methods (see supplemental methods). Mice were housed in a climate-controlled room with 12/12 h light/dark cycle at an AAALAC approved facility at Texas A&M University. All procedures were approved by the Institutional Animal Care and Use Committee of Texas A&M University #2019-0025. Mice had access to standard chow, 19% protein extruded rodent diet (Teklad Global Diets), and water ad libitum except during exposure periods. A schematic of our exposure timeline is shown in Supplemental Figure S1. Male and female WT or Nrf2−/− mice were time-mated. The presence of a vaginal plug defined gestational day (GD) 0.5. Beginning on GD0.5, dams were randomized and placed into exposure chambers where they were exposed to either FA (n = 5;5) or PM (n = 4;7), listed as (n = WT; Nrf2−/−), respectively, from 0800 to 1400 h (6 h) daily through GD18.5. Following exposure on GD18.5, mice were removed to individual housing and allowed to deliver spontaneously, denoted as PND1 (post-natal day). Pups were weighed and euthanized on PND5 for baseline evaluations.

Thiol redox analysis followed Jones and Liang with slight modifications [24]. PND5 livers were snap frozen in liquid nitrogen until analysis. Approximately 10–50 mg of liver tissue was quickly weighed before being homogenized in 1 mL of buffer solution containing an internal standard, γ-glutamylglutamate (γ-Glu-Glu) and centrifuged at 10,000× g for 10 min at 4 °C. Then 60 μL of 7.4 mg/mL iodoacetic acid (IAA) was added to 300 μL of the supernatant and immediately vortexed. pH was adjusted to ~9.0 ± 0.2 with ~425 μL of KOH/tetraborate to precipitate proteins, then incubated at room temperature for 30 min before pH was confirmed. 300 µL dansyl chloride (DC) solution (20 mg/mL in acetone) was added to each sample, vortexed, and incubated at room temperature in complete darkness for 16–28 h. 500 µL of HPLC-grade chloroform was added to samples, followed by vortexing and centrifugation. The upper aqueous layer was stored in −80 °C until HPLC analysis.

Low birth weight is one of the common perinatal effects in children born to mothers exposed to particulate matter air pollution [2,7]. We monitored birth weights in neonates born to Nrf2−/− and wildtype (WT) dams exposed for the length of gestation (Figure 1) to either filtered air (FA, 0 g/m3) or ultrafine particulate matter (PM, 111.87 ± 4.40 g/m3, mean ± SEM) (Supplemental Figure S1). Regardless of exposure group or litter size, no statistical significance was detected between the average daily maternal weight gain during gestation (p = 0.560) or the final weights of the pregnant dams before parturition (p = 0.570) (Supplemental Figure S2). Average litter sizes did not vary between exposures or genotypes (p = 0.809), nor was there any correlation between litter size and pup weight (p = 0.600) (data not shown). Initial weights of pups taken on PND5 showed Nrf2−/− pups exposed to FA with significantly reduced weight gain compared to WT FA-exposed pups (p = 0.0001) (Figure 2). Moreover, PM-exposed Nrf2−/− offspring weighed significantly less than PM-exposed WT pups (p = 0.045). These changes failed to reach statistical significance when separated by sex.

Quantitative real-time PCR (qPCR) was performed in PND5 lungs to evaluate oxidative stress-related gene expression (Figure 4). We expected that Nrf2−/− neonates would have less ability to respond to oxidative stress and that PM exposure would enhance this impaired response. Overall, there were no significant differences in expression of selected genes. A few of the interesting trends in the male Nrf2−/− may be driven by sample variability.

We extrapolated the neonatal systemic oxidative stress state by measuring thiol redox capacity in PND5 livers by HPLC analysis. The ratios of glutathione (GSH) to glutathione disulfide (GSSG), and cysteine (Cys) to cystine (CySS) indicate the neonates’ ability to reduce reactive oxygen species (ROS) by donating an electron from either GSH or Cys. Both indicators showed males and females were not significantly different (Table S1, Figure 5).

All animal use protocols were conducted under the approval of the Institutional Animal Care and Use Committee at Texas A&M University #2019-0025.

All data is presented in the article and supplementary materials.

The authors gratefully acknowledge the assistance of the Texas Genomic Institute of Medicine, especially Ben Morpugo and Andrei Golovko, in addition to Natalie Johnson’s laboratory, including Toriq Mustapha, Navada Harvey, and Ross Shore. 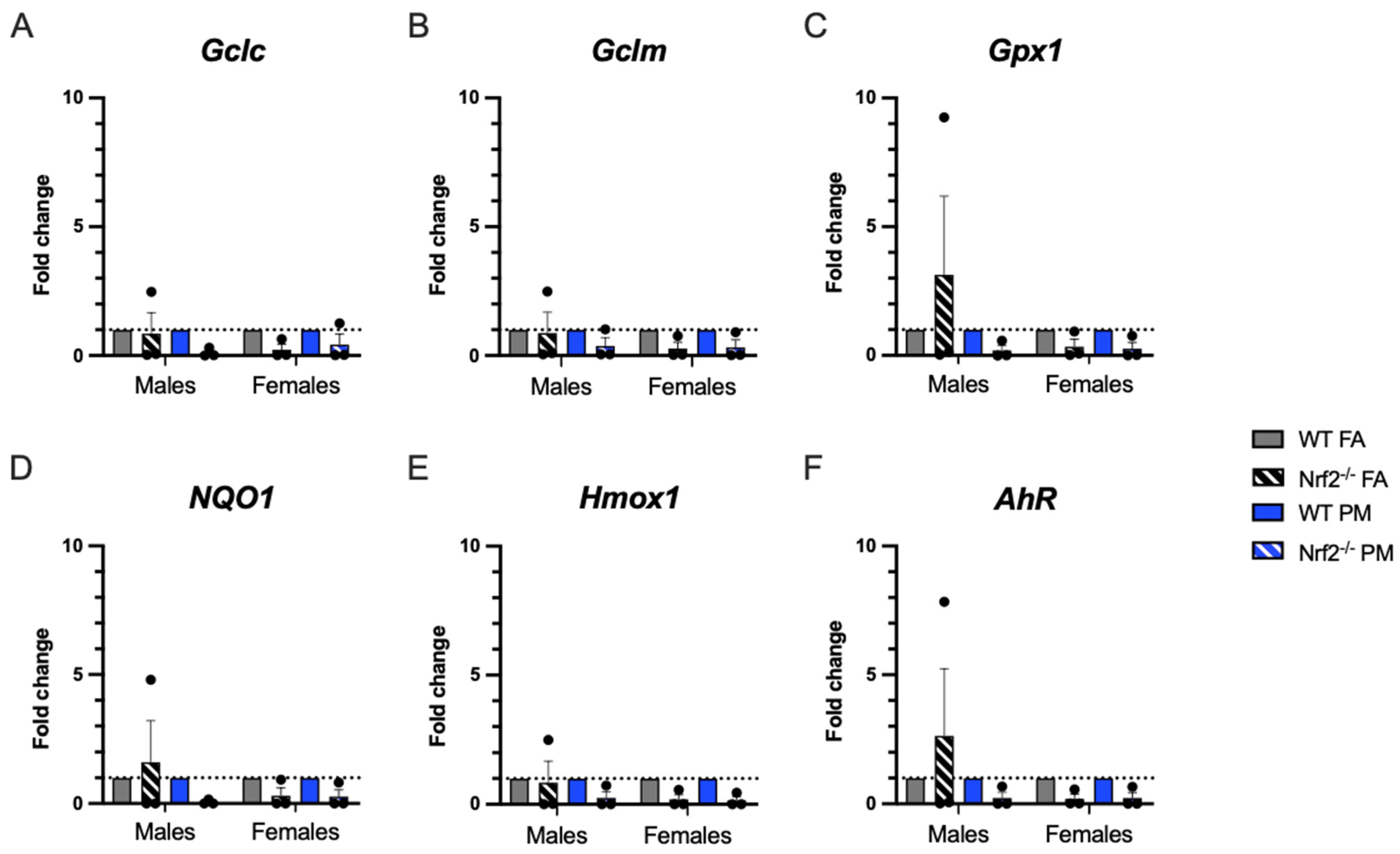