Peroxisome proliferator-activated receptor gamma (PPAR-γ) is ubiquitously expressed in testicular tissue and plays a crucial role in regulating various physiological processes. Pioglitazone (PIO) is one of the PPAR-γ agonists, having anti-oxidant and anti-inflammatory effects. Patients on gentamycin treatment may undergo serious side effects such as testicular damage. To the best of our knowledge, this was the first study to investigate the possible protective anti-inflammatory and anti-apoptotic effects of PIO on gentamycin-induced testicular damage. Fifty adult male Wistar albino rats included in the study as the control group (CTL) received normal saline; a gentamycin-induced testicular damage group (GM) received gentamycin (100 mg/kg); PIO5, PIO10, PIO20 groups received PIO at a dose of 5, 10, and 20 mg/ kg, respectively, for 21 days, and gentamycin was started at day 15 of the experiment for 6 days. The parameters of spermatozoa and histopathological alterations in the testes were significantly improved in the PIO20 group. Moreover, MDA levels, inflammatory mediators, and apoptotic Bax expression were decreased. The activity of glutathione peroxidase, catalase, total antioxidant capacity, and anti-apoptotic Bcl-2 genes expression were increased. It was concluded that PIO20 could protect against gentamycin-induced testicular damage in Wistar rats through its anti-oxidant, anti-inflammatory, and antiapoptotic effects. View Full-Text
Keywords: testis; gentamycin; PPAR-γ; testosterone; oxidative stress; inflammatory cytokines testis; gentamycin; PPAR-γ; testosterone; oxidative stress; inflammatory cytokines
►▼ Show Figures 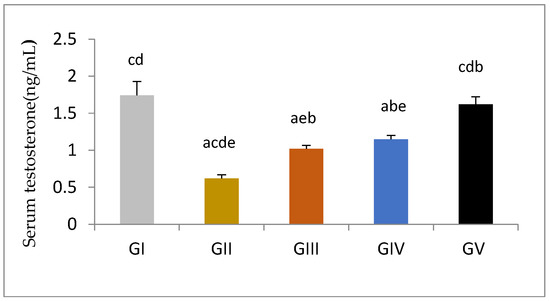