Short- and Long-Term Effectiveness of Supplementation with Non-Animal Chondroitin Sulphate on Inflammation, Oxidative Stress and Functional Status in Obese Subjects with Moderate Knee Osteoarthritis before and after Physical Stress: A Randomized, Double-Blind, Placebo-Controlled Trial

Resistance exercise training has been implemented to improve athletic performance and prevent non-communicable diseases and sarcopenia. A major adaptive effect of resistance training is increased muscle strength. Generally, transmission and conduction of nervous impulses are activated mainly during the early period of training, which contributes to the contraction of muscle fibers. With time, continuous resistance training causes the hypertrophy of each muscle fiber, which leads to a further increase in strength. Another major function of skeletal muscle is energy expenditure. Muscles consume energy substrates and produce large amounts of ATP used for muscle contraction; this corresponds to approximately 20% of the basal metabolism of the entire body [1]. Therefore, the metabolic rate increases with muscle hypertrophy [2].
Protein synthesis and catabolism occur continuously in the body. Promotion of protein synthesis and prevention of protein catabolism lead to muscle hypertrophy. Resistance training is well known to be the most efficient way of stimulating protein anabolism, which is mediated by various signaling factors. Furthermore, adequate nutritional management accelerates improvements in muscle strength and mass during resistance training. Generally, sufficient intake of protein is required to supply amino acids as substrates for protein synthesis in skeletal muscle cells [3,4]. A combined intake of carbohydrates and proteins is also effective in increasing protein anabolism by stimulating insulin secretion [5]. Many studies have also demonstrated the positive effects of macronutrient intake on training-induced muscle adaptation [3,4,5]. However, studies that investigate the effects of micronutrients on training adaptation are limited.
Previous studies showed that some micronutrients promote protein synthesis and skeletal muscle metabolism in vivo and in vitro. In humans, the administration of astaxanthin, a carotenoid, has been proven to improve the adaptation of muscle strength during resistance training [6]. In animal and culture cell studies, β-carotene, a carotenoid, and resveratrol have been reported to activate protein synthesis signaling factors, Akt, the mammalian target of rapamycin (mTOR), and p70S6 kinase (p70S6K) in skeletal muscles [7,8,9]. These findings suggest that astaxanthin, β-carotene, and resveratrol might enhance anabolism in skeletal muscles. Recently, we found that these anabolism-enhancing micronutrients, astaxanthin, β-carotene, and resveratrol, promoted muscle hypertrophy with elevated protein synthesis in a mouse hypertrophic model [10]. This anabolic effect was accelerated when taken in combination in small doses rather than in a single large-dose intake. These findings led us to hypothesize that dietary foods containing a small dose of anabolic micronutrients may be useful to facilitate muscle adaptation during resistance training in humans. Here, we report that dietary intake of astaxanthin-, β-carotene-, and resveratrol-rich foods supports resistance training-induced adaptation.

Twenty-six healthy men (age: 22.3 ± 0.3 years; height: 171.1 ± 1.6 cm) were recruited as participants, which was approved by the ethics committee of Kyoto Prefectural University (No. 2016-112) and the university hospital medical information network clinical trials registry in Japan (UMIN000041217). All participants signed a consent form after receiving an explanation of the study. None of the participants had a current or prior chronic disease or history of smoking. None currently used any medication or supplements. In addition, none of the participants were habituated to regular exercise. The participants were randomly divided into two equal-sized groups, the control and intervention groups (n = 13), and body composition was measured using bioelectrical impedance analysis (BIA; lnBody430, Kobe Medi-Care Co., Ltd., Hyogo, Japan).

This study was designed as a randomized controlled trial. All the participants performed the resistance training program twice a week for 10 weeks. During the training period, salmon flakes, green and yellow vegetable juice, and lingonberry jam, which contain astaxanthin, β-carotene, and resveratrol, respectively, were provided for the intervention group. Body composition, nutrient intake, maximal voluntary contraction (MVC), oxygen consumption, subjective fatigue, and serum carbonylated protein level were measured before and after training. Measurements of muscle strength, body composition, and expiratory gas were performed during the week before the training period and during the final week of the period. Blood samples were taken on the first day of exercise and on the day of exercise in the final week of the training period.

The resistance training program consisted of eight types of exercise (chest press, chest fly, leg press, leg extension, leg curl, back extension, seated rowing, and sit-up) using a combined machine (Senoh Co., Ltd., Chiba, Japan) and performed in 3 sets of 10 repetitions with 10 repetition maximum (RM). The training frequency was twice a week, with 2 to 3 d intervals set between training sessions, and the load was gradually increased according to the 10 RM for each individual. The MVC of leg extension was measured in both the left and right legs with a leg-extension strength meter (ST 200R, Meiko Co., Ltd., Osaka, Japan).

The participants were instructed to refrain from intense physical activity, eating, and drinking, except for water, from 22:00 until breakfast in the morning. They were asked to take breakfast without caffeine and alcohol at least 1.5 h before visiting the laboratory. After sitting for 30 min, oxygen consumption and carbon dioxide production were measured in the supine position using a breath-by-breath respiromonitor system (AE-310s, Minato Medical Sciences Co., Ltd., Osaka, Japan) for 20 min. The respiratory quotient and substrate use were calculated from the levels of oxygen consumption and carbon dioxide production [11].

Carbonylated protein, an oxidative damage marker, was measured before and after the resistance exercise at the pre- and post-intervention periods. The participants were instructed to refrain from intense physical activity and fast from 22:00 on the eve of blood sample collection. On the day of blood sampling, they took steamed rice (200 g, energy 372 kcal, protein 5.0 g, fat 0.6 g, and carbohydrate 75.6 g) and rested for 1 h. A blood sample was collected from the median cutaneous vein. After a resistance exercise session, blood was collected again. The collected blood was injected in a vacuum blood collection tube and centrifuged at 1900× g at 4 °C for 15 min. Serum samples were used to measure carbonylated protein concentrations by using a protein carbonyl enzyme-linked immunosorbent assay (ELISA) kit (BioCell Co., Ltd., Auckland, New Zealand) in accordance with the manufacturer’s instructions.

Dietary assessment was conducted to calculate nutrient intake before and at week 10 of training. All the participants were permitted to eat freely, and their food intakes were recorded for 3 d by using a food diary and camera. Then, a dietitian reviewed their diet to follow up and estimate their nutrient intakes by using an Excel add-in software (Excel Eiyou-kun Ver. 6.0, Kenpakusha Co., Ltd., Hokkaido, Japan). For the intervention group, salmon flakes (1 mg astaxanthin/100 g; Fujiyahonten Co., Ltd., Hokkaido, Japan), vegetable juice (4.5 mg β-carotene/100 mL; KAGOME Co., Ltd., Aichi, Japan), and lingonberry jam (0.24 mg resveratrol/100 g; IKEA Japan Co., Ltd., Chiba, Japan) were provided. The participants in the intervention group were asked to consume more foods containing green and yellow vegetables, salmon, and shrimp, in addition to the foods provided. The target intake amounts of the macronutrients and micronutrients were advised by a dietitian according to their individual body weights. All participants in the intervention group had consumed the provided food. By contrast, the control group was neither encouraged nor restricted in their intake of these three ingredients.

All data are reported as mean ± standard error (SE). Differences between the control and intervention groups were tested using the unpaired t-test or two-way analysis of variance (ANOVA). When significant differences were determined with ANOVA, post hoc analyses were conducted with the Bonferroni test. For the parameters with the absence of normality, nonparametric statistical analysis was performed. Cohen’s d was calculated to measure the effect size between the control and intervention groups. The statistical analysis was completed using SPSS ver. 25 (IBM Japan Inc., Tokyo, Japan), and p values < 0.05 were considered statistically significant.

The skeletal muscle mass was significantly higher after than before training in both groups (control: p = 0.002, intervention: p = 0.030; Table 1). We found no significant differences in body weight, body mass index, and body fat between before and after training. The changes in these parameters were not significantly different between the groups.

The serum carbonylated protein levels before training did not change between before and after exercise in either group (Figure 2). By contrast, it tended to be lower after than before exercise (p = 0.059) in the post-training period in the intervention group, but not significantly changed in the control group.

The subjective fatigue score at rest in the intervention group was significantly decreased at 7 weeks as compared with before training, with a large effect size (p = 0.006, d = 0.97; Figure 3). The lower score was maintained during the post-training period (p = 0.070, d = 0.58). By contrast, we found no significant difference in the control group.

The study was conducted according to the guidelines of the Declaration of Helsinki, and approved by the ethics committee of Kyoto Prefectural University (No. 2016-112) and the university hospital medical information network clinical trials registry in Japan (UMIN000041217).

The data presented in this study are available on request from the corresponding author. The data are not publicly available.

The authors thank the members of the Laboratory of Nutrition Science and Laboratory of Health Science of Kyoto Prefectural University for their technical assistance.

The authors declare that no conflict of interest are associated with this manuscript. 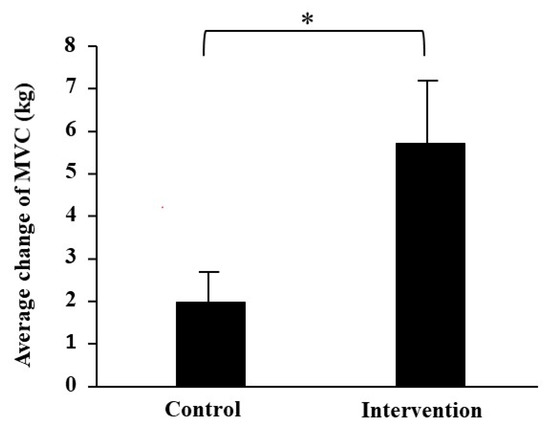 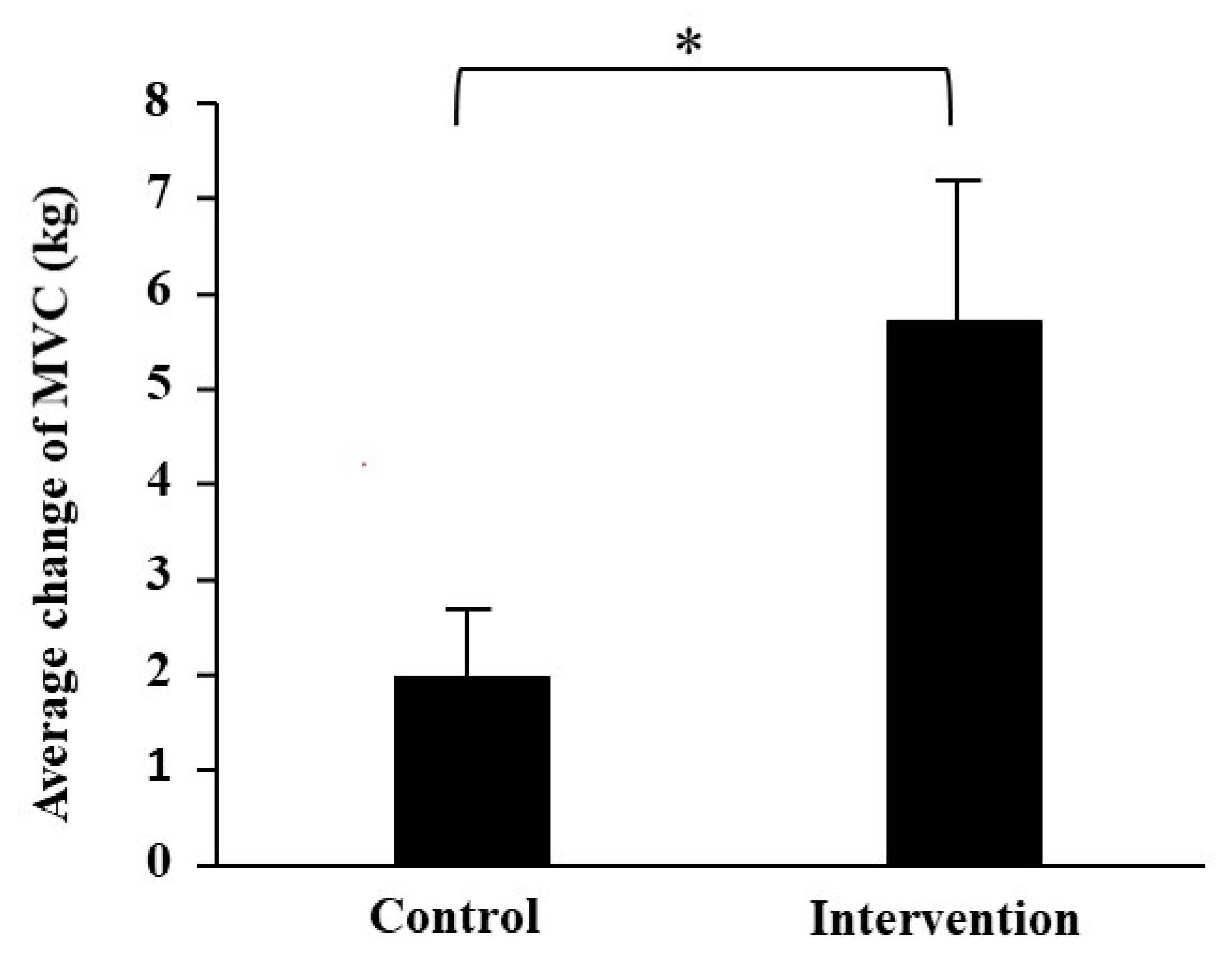 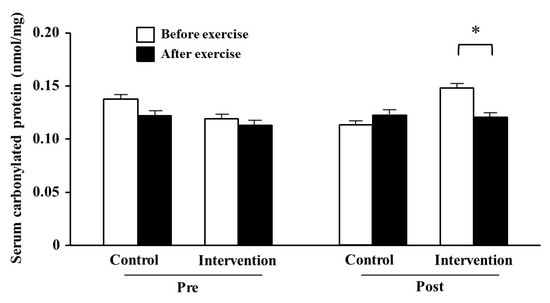 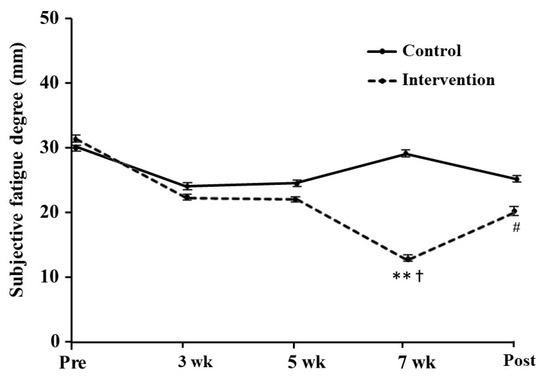 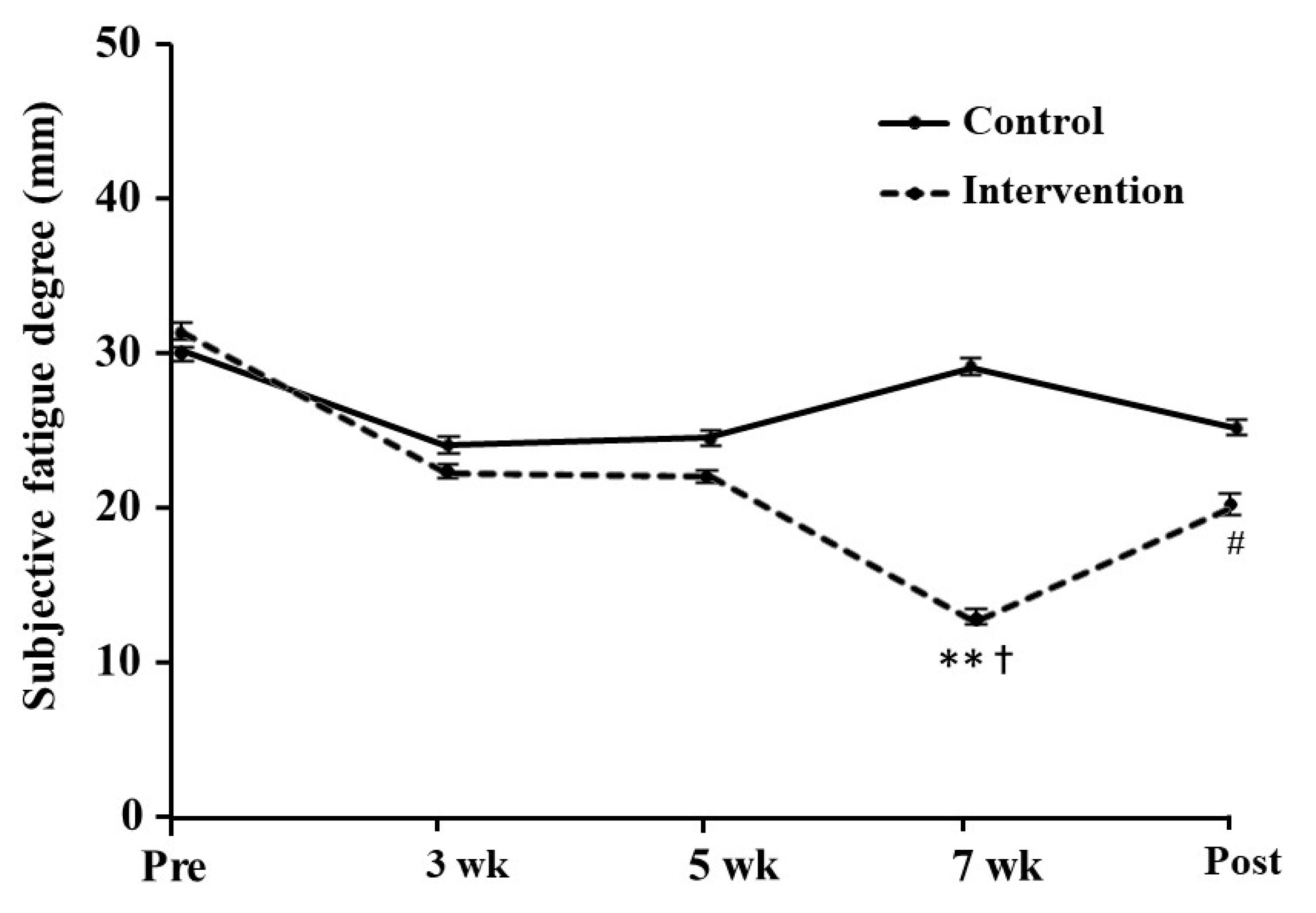