The dysregulation of the inflammatory and neuroendocrine systems seen in major depressive disorder (MDD) may persist after remission and this is associated with a higher risk of relapse. This vulnerable subgroup may be characterized by a history of childhood trauma. In a single-blind randomized placebo-controlled crossover study, 21 women with remitted recurrent MDD and 18 healthy controls were exposed to psychosocial stress (Trier social stress test) or inflammatory stress (typhoid vaccine), or both, to investigate the effects of childhood trauma on the neuroendocrine and inflammatory responses. Childhood trauma was assessed using the Childhood Trauma Questionnaire and participants were dichotomized into a traumatized and non-traumatized group. Serum adrenocorticotropic hormone (ACTH), cortisol, interferon (IFN)-γ, tumor necrosis factor (TNF)-α, and interleukin (IL)-6 were measured at regular intervals after each intervention. The effects of trauma, time, and intervention on these parameters were modeled by fitting linear mixed models. Childhood trauma in itself did not have a main effect on the outcome measurements. However, an interactional effect of trauma with stressor type was found in the remitted MDD group: trauma was associated with higher cortisol levels only after adding immunological to psychosocial stress, and with lower TNF-α levels in response to vaccination. This suggests the existence of a vulnerable trauma-associated MDD endophenotype. View Full-Text
Keywords: “Child Abuse” [Mesh]; “Depressive Disorder” [Mesh]; “Pituitary-Adrenal System” [Mesh]; inflammation; psychosocial stress; vulnerability “Child Abuse” [Mesh]; “Depressive Disorder” [Mesh]; “Pituitary-Adrenal System” [Mesh]; inflammation; psychosocial stress; vulnerability
►▼ Show Figures 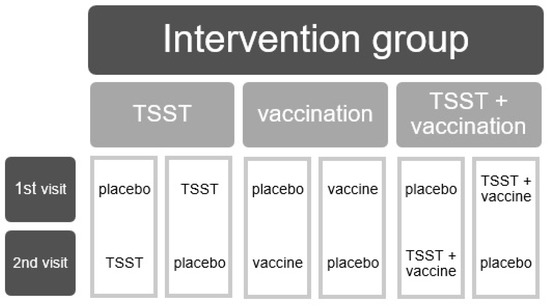