In this paper, we present a method to quantify the coupling between brain regions under vigilance and enhanced mental states by utilizing partial directed coherence (PDC) and graph theory analysis (GTA). The vigilance state is induced using a modified version of stroop color-word task (SCWT) while the enhancement state is based on audio stimulation with a pure tone of 250 Hz. The audio stimulation was presented to the right and left ears simultaneously for one-hour while participants perform the SCWT. The quantification of mental states was performed by means of statistical analysis of indexes based on GTA, behavioral responses of time-on-task (TOT), and Brunel Mood Scale (BRMUS). The results show that PDC is very sensitive to vigilance decrement and shows that the brain connectivity network is significantly reduced with increasing TOT, p < 0.05. Meanwhile, during the enhanced state, the connectivity network maintains high connectivity as time passes and shows significant improvements compared to vigilance state. The audio stimulation enhances the connectivity network over the frontal and parietal regions and the right hemisphere. The increase in the connectivity network correlates with individual differences in the magnitude of the vigilance enhancement assessed by response time to stimuli. Our results provide evidence for enhancement of cognitive processing efficiency with audio stimulation. The BRMUS was used to evaluate the emotional states of vigilance task before and after using the audio stimulation. BRMUS factors, such as fatigue, depression, and anger, significantly decrease in the enhancement group compared to vigilance group. On the other hand, happy and calmness factors increased with audio stimulation, p < 0.05. View Full-Text
Keywords: vigilance; enhancement; EEG; partial directed coherence (PDC); graph theory analysis (GTA) vigilance; enhancement; EEG; partial directed coherence (PDC); graph theory analysis (GTA)
►▼ Show Figures 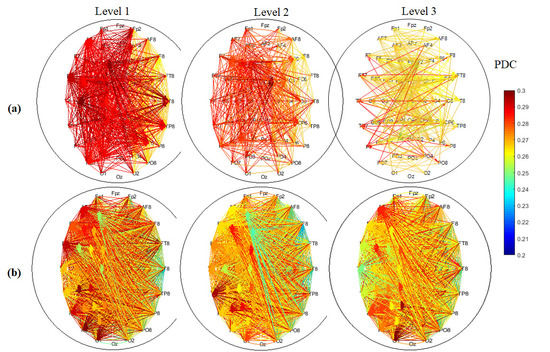