Epilepsy Surgery for Skull-Base Temporal Lobe Encephaloceles: Should We Spare the Hippocampus from Resection?
Previous Article in Journal

The Effects of Cannabinoids on Executive Functions: Evidence from Cannabis and Synthetic Cannabinoids—A Systematic Review

The brain’s role in the perception of mechanical pressure to the lumbar spine is not fully understood. Advances in neuroimaging techniques have expanded our knowledge of brain activation patterns in response to various sensory stimuli. Sensory stimuli such as, pressure, pain, touch, proprioception, and heat are associated with different sensory receptors throughout the body [1]. These different stimuli activate different regions of the brain including primary and secondary somatosensory cortices, cingulate, and insular cortex [2]. Mechanical pressure is a type of sensory stimulus that is applied to the lower back daily during activities such as sitting, walking, and lifting. Additionally, mechanical pressure is used clinically as a method of assessing and treating low back pain. However, few studies have examined the cortical representation of the lower back (lumbar spine) specifically with regards to mechanical stimuli.
Anatomical studies in nonhuman primates [3,4,5] and in other animals [6] have identified the medial aspect of the primary somatosensory cortex (S1; Brodmann areas 3,1,2) as representing the trunk region. Functional neuroimaging findings have reported activation in the primary somatosensory cortex in humans in response to electrical [7] and tactile stimulation (i.e., light touch) [8] delivered at anterior or posterior aspects of the trunk. The mechanosensory afferents from lumbar facet joints, ligaments, and discs respond mainly to mechanical stresses and are important for mobility, stability, and postural control [4,9]. Mechanical stresses are imparted on the lumbar spine during activities of daily living. They are also used during clinical physical examination to elicit patients’ response, since pressure on the spine can re-elicit painful symptoms. To date, the cortical response to mechanical stress has not been fully studied. To our knowledge, only two studies have examined brain activation responses to mechanical stimuli on the lower back in healthy subjects. The first study reported functional magnetic resonance imaging (fMRI) brain activation in primary and secondary somatosensory cortices (S1, S2), the inferior parietal, temporal, and insular cortices of the right hemisphere in response to an intense—yet non-painful—vibration stimulus to bilateral lower back in healthy subjects [10]. In the second study, light manual pressure applied to lumbar segments 1, 3, and 5 (L1, L3, and L5) in healthy subjects elicited activation in bilateral S1 and S2 and anterior cerebellum [11]. However, these studies are targeted to assess cortical response to vibration and light pressure only. The objective of the current study was to determine brain activation patterns in response to different levels of mechanical pressure on the lumbar spine in healthy subjects, since greater than minimum amount of pressure is placed on the spine during daily activities. Moreover, different levels of pressure are used for different purposes throughout clinical assessment and treatment [12]. We hypothesized that different pressure levels would lead to different brain activation patterns. Mapping out brain activation patterns to multiple pressure levels could improve clinical testing procedure and treatment based on pressure delivered to the lumbar spine, as this is a commonly applied manual technique for assessment and treatment of low back pain.

Fifteen right-handed healthy subjects (mean age, 33.46 ± 8.5 years; 10 males) were recruited from the University of Kansas Medical Center through mass e-mails and word of mouth. Exclusion criteria were (1) history of low back or lower limb pain within the past 6 months, (2) history of spinal surgery, (3) neurological, neuromuscular, or psychiatric disorders, (4) history of spinal cord compression, tumor, or infection, and (5) magnetic resonance imaging (MRI) exclusions: ferromagnetic metallic objects in the body, cardiac pacemaker, pregnancy, etc. The study was approved by the Institutional Review Board. All subjects gave written informed consent prior to their participation in the study and were compensated for their time and travel expenses.

Each subject’s lumbar segment 3 (L3) was identified using the iliac crest as an anatomical landmark. The lumbar segment at the level of the iliac crest was considered L4 vertebrae (or interspace between L4 and L5). The skin was marked (with ink) and a belt with a cutout corresponding to the pressure device was placed around the subject’s waist to ensure correct stimulation of L3 in supine position. In the magnet, subjects laid supine over a foam board that had a cutout for delivery of the mechanical pressure. Mechanical pressure was applied to the L3 segment level using a custom-made pneumatic device constructed in our laboratory. Compressed air was delivered to an inflatable air bladder at varying pressures and frequencies timed by a computer software (E-Prime, Psychology Software Tools, Inc., Sharpsburg, PA, USA). We fixed two small plastic balls to the bladder to provide bilateral contact points approximately 2 cm lateral to midline. The height of the balls was adjusted to almost contact the skin surface to accommodate individual subjects’ lumbar curves (Figure 1). The entire unit was secured on a wooden stick that could be adjusted caudally and cephalically on the MRI table for accurate anatomic alignment. The device was positioned so that the balls were not in contact with the subject’s back when the air bladder was deflated. The belt was loosened after confirming accurate placement of the pressure device on the subject’s back. The subject’s head was secured with foam pads to minimize head movement. Both legs were supported in a partially flexed knee and hip position with a foam wedge and pillows under the knees to obtain a flat back posture.
Once in position (on the scanner table but not inside the magnet), the variable pressure conditions were optimized for each subject based on their subjective ratings. Three increasing, but non-painful, pressures were determined for each subject prior to the scan, starting at 5 pounds per square inch “psi” to the maximum pressure range of 30 psi. The device was calibrated by varying the pressure to obtain three consistent ratings per subject: low, medium, and high, using a 0–10 pressure rating scale where 0 = no pressure (no touch) and 10 = maximum pain-free pressure. Therefore, the pressure levels per subject were based on subjective ratings rather than pressure in pounds per square inch (psi) units. Across subjects, mean ratings (±SD) for low, medium, and high were 2.13 ± 0.91, 3.80 ± 0.86, and 5.40 ± 1.45, on the 0–10 pressure scale, respectively. Critical for our study, none of the pressure levels caused pain. After pressure device calibration and the subject’s experience of pressure delivery, subjects were pushed inside the magnet.

Before the scan started, a test trial of the fMRI task was administered to familiarize subjects with the task. The examiner applied pressure during the scan using a block design (stimulus, rest). During the stimulus condition of the fMRI task, the air bladder was inflated causing the plastic balls to rise up against the subject’s lumbar spine, providing pressure to the bilateral aspect of spinous processes at L3. During the rest condition, the bladder was deflated to 0 psi and the balls were no longer in contact with the subject’s back. Six functional scans were obtained—two with low, two with medium, and two with high pressure—with pairs of selected consecutive runs utilizing the same pressure. The order of pressure level presentation was randomized across subjects. Each scan included an initial 28 s rest, and then 9 blocks (4 rest and 5 stimulus conditions), with each block consisting of either a 23.3 s rest period (no pressure) or a 17.6 s stimulus period (pressure) (Figure 2) making each scan 208 s long. The block design was presented to the examiner—but not to the subject—on a computer screen in the console room using E-Prime software. These visual cues allowed the examiner to identify rest and stimulus periods in order to manually control the pressure stimulus.

All magnetic resonance (MR) images were acquired at 3T MR (Siemens Medical Solutions, Erlangen, Germany) at the Hoglund Brain Imaging Center, University of Kansas Medical Center. T1-weighted sagittal localizing series were acquired. High-resolution anatomic images were acquired using a T1-weighted MPRAGE sequence: TR = 2300 ms, TE = 3.05 ms, flip angle = 8°, matrix = 256 × 256 mm, and voxel size = 0.94 × 0.94 × 1.00 mm. After acquiring the structural sequence, six blood oxygen level-dependent (BOLD) scans were acquired for the functional block design task using the following parameters: TR = 2000 ms, TE = 50 ms, flip angle = 90°, and voxel size = 3.75 × 3.75 × 5.00 mm.
BOLD sequences were analyzed using AFNI software (Analysis of Functional NeuroImaging, Milwaukee, WI, USA). Preprocessing steps included time shifting, motion correction, alignment of the structural images to the functional images, warping to standard Talairach space, reslicing of the functional data to 3.50 × 3.50 × 3.50 mm, and spatial smoothing (using 6 mm full-width at half-maximum Gaussian). Individual time points were assessed for outliers. Time series were censored from the analysis if >50% of the voxels in the volume were considered outliers. In addition, time points plus one TR before and two TRs after were censored if motion was more than 0.30 mm between TRs.
The neural response to each of the pressure levels was estimated at the individual subject level using the general linear model. Regressors representing the three pressure levels, as well as the six motion-parameter estimates, were entered into the model. We used the restricted maximum likelihood (REML) approach implemented by AFNI’s 3dREMLfit to estimate the regressors of interest.

Our study shows that non-painful mechanical pressure applied to the lumbar spine of healthy subjects can lead to decreased brain activation in several somatosensory regions, which might mimic the relieving effect caused by manual mobilization to the lumbar spine in lower back pain patients.

This work was supported in part by the American Physical Therapy Association Foundation, a KL2 award from Frontiers: Heartland Institute for Clinical and Translational Research (CTSA;TR000119), and a KUMC Clinical Pilot Grant. The Hoglund Brain Imaging Center is supported by a generous donation gift from Forrest and Sally Hoglund and funding from the National Institutes of Health (P30 HD002528, P30 AG035982, S10 RR29577, and UL1 TR000001). We would like to thank Brianna Cowley for her assistance in data analysis. The contents are solely the responsibility of the authors and do not necessarily represent the official views of the NIH or any institute. 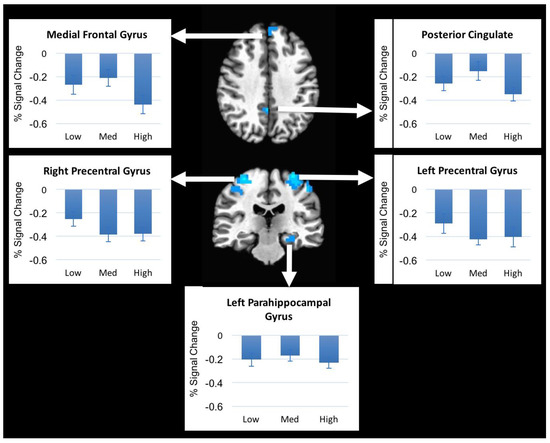 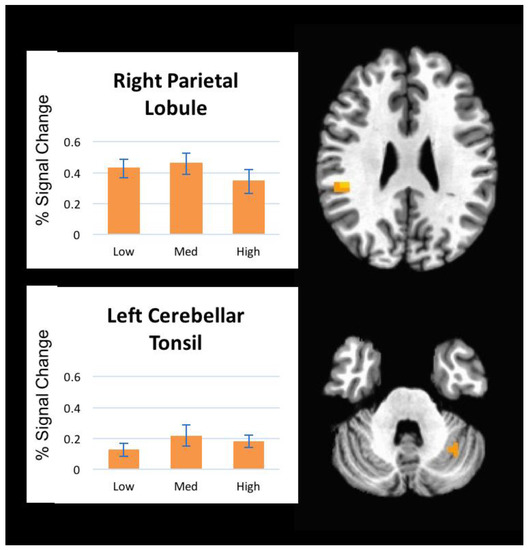