Neurobiology of Propofol Addiction and Supportive Evidence: What Is the New Development?

Propofol is a short-acting intravenous anesthetic agent suitable for induction and maintenance of general anesthesia as well as for procedural and intensive care unit sedation. As such it has become an unparalleled anesthetic agent of choice in many institutional and office practices. However, in addition to its idealistic properties as an anesthetic agent, there is accumulating evidence suggesting its potential for abuse. Clinical and experimental evidence has revealed that not only does propofol have the potential to be abused, but also that addiction to propofol shows a high mortality rate. Based on this evidence, different researchers have shown interest in determining the probability of propofol to be an addictive agent by comparing it with other drugs of abuse and depicting a functional similitude that involves the mesocorticolimbic pathway of addiction. In light of this, the Drug Enforcement Agency and the American Society of Anesthesiologists have put forth certain safety recommendations for the use of propofol. Despite this, the abuse potential of propofol has been challenged at different levels and therefore the preeminent focus will be to further validate the linkage from medicinal and occasional use of propofol to its addiction, as well as to explore the cellular and molecular targets involved in establishing this linkage, so as to curb the harm arising out of it. This review incorporates the clinical and biomolecular evidence supporting the abuse potential of propofol and brings forth the promising targets and the foreseeable mechanism causing the propofol addiction phenotypes, which can be called upon for future developments in this field. View Full-Text
Keywords: propofol; abuse potential; GABAA receptor; glycine receptor; fospropofol propofol; abuse potential; GABAA receptor; glycine receptor; fospropofol
►▼ Show Figures 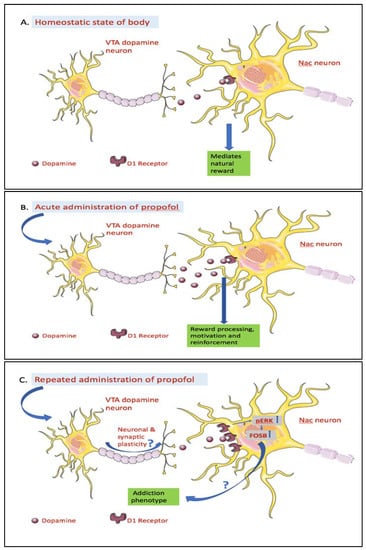