Spatial Impairment and Memory in Genetic Disorders: Insights from Mouse Models
Next Article in Special Issue

:
Morphine, an effective but addictive analgesic, can profoundly affect the inflammatory response to pathogens, and long-term use can result in morphine tolerance. Inflammasomes are protein complexes involved in the inflammatory response. The nucleotide-binding oligomerization domain-like receptor (NLR) Family Pyrin Domain Containing (NLRP) 12 (NLRP12) inflammasome has been reported to have anti-inflammatory activity. In this study, we examined the expression of NLRP12 inflammasome related genes in the adult F344 rat brain in response to the bacterial endotoxin lipopolysaccharide (LPS) in the presence and absence of morphine tolerance. Morphine tolerance was elicited using the 2 + 4 morphine-pelleting protocol. On Day 1, the rats were pelleted subcutaneously with 2 pellets of morphine (75 mg/pellet) or a placebo; on Days 2 and 4 pellets were given. On Day 5, the animals were randomly assigned to receive either 250 µg/kg LPS or saline (i.p.). The expression of 84 inflammasome related genes in the rat brain was examined using a Ploymerase Chain Reaction (PCR) array. In response to LPS, there was a significant increase in the expression of the pro-inflammatory cytokine/chemokine genes interleukin-1 beta (Il-1β), interleukin-6 (Il-6), C-C motif chemokine ligand 2 (Ccl2), C-C motif chemokine ligand 7 (Ccl7), C-X-C motif chemokine ligand 1 (Cxcl1), and C-X-C motif chemokine ligand 3 (Cxcl3) and a significant decrease in the anti-inflammatory NLRP12 gene in both morphine-tolerant and placebo-control rats compared to saline-treated rats, although the changes were greater in the placebo-control animals. The Library of Integrated Network-Based Cellular Signatures’ (LINCS) connectivity map was used to analyze the list of affected genes to identify potential targets associated with the interactions of LPS and morphine tolerance. Our data indicate that, in the morphine tolerant state, the expression of NLRP12 and its related genes is altered in response to LPS and that the Vacuolar protein-sorting-associated protein 28 (VPS28), which is involved in the transport and sorting of proteins into sub-cellular vesicles, may be the key regulator of these alterations.
Keywords:
morphine tolerance; NLRP12 inflammasome; LPS

Morphine is a potent analgesic that is widely used clinically for pain management. However, long-term use of morphine can lead to morphine tolerance and addiction [1]. In addition, morphine can profoundly and detrimentally affect the body’s immune system, at both the cellular and molecular levels. Morphine suppresses lymphocyte trafficking; decreases natural killer cell activity; inhibits the production of pro-inflammatory cytokines, such as tumor necrosis factor-alpha (TNF-α) and interleukin-1 beta (IL-1β) [2,3,4]; and induces atrophy of immune organs, such as the spleen and thymus [5,6,7,8,9].
Morphine-induced immunosuppression significantly increases the risk of bacterial infection [10]. Although the immunosuppressive effects of morphine have been widely studied, the mechanisms involved in the body’s inflammatory response to pathogens during morphine tolerance have not been fully investigated.
Inflammasomes are multi-protein complexes assembled from nucleotide oligomerization domain receptor proteins known as nucleotide-binding oligomerization domain (NOD)-like receptors (NLR) [11]. They function as important mediators of innate immunity. Inflammasomes play a key role in the regulation of inflammation and immune responses by participating in the production of pro-inflammatory cytokines, including IL-1β and interleukin-18 (IL-18) [11,12,13]. Both IL-1β and IL-18 produce a wide variety of biological effects associated with infection, inflammation, and autoimmune processes.
There have been about 20 NLR inflammasomes identified in humans. The most commonly studied ones include NLR Family Pyrin Domain Containing 1 (NLPR1), NLR family apoptosis inhibitory protein 6 (NAIP2), NLR Family Pyrin Domain Containing 3 (NLRP3), NLR Family Pyrin Domain Containing 5 (NLRP5), NLR Family Pyrin Domain Containing 6 (NLRP6), NLR Family Pyrin Domain Containing 12 (NLRP12), NLR family member X1 (NLRPX1), and NLR Family CARD Domain Containing 4 (NLRC4) [14]. Inflammasomes have been sub-divided into two groups; pro-inflammatory inflammasomes and anti-inflammatory inflammasomes. The pro-inflammatory inflammasomes include NLRP3 and NLRC4, and their functions have been widely studied. The anti-inflammatory inflammasomes include NLRP12, NLRX1, NLRC3, and NLRC5. They appear to function by limiting or suppressing a pro-inflammatory response; however, this group has not been well studied to date.
There have been a few recent reports characterizing the anti-inflammatory properties of NLRP12 [15,16]. NLRP12 can inhibit NF-κB signaling through both the canonical and non-canonical pathways, which are important in the control and regulation of innate immune responses [15,16]. NLRP12 inhibits IL-1 receptor-associated kinase 1 (IRAK1), a downstream component of the pathogen activated Toll-like receptor (TLR) pathway, which, in turn, decreases the signaling of the canonical NF-κB pathway [17]. In the non-canonical NF-κB pathway, NLRP12 interacts with and rapidly degrades NF-κB-inducing kinase (NIK), thereby suppressing NF-κB signaling [18].
The Library of Integrated Network-Based Cellular Signatures (LINCS) [19] is a database which implements a biological network-based strategy to make assessments regarding the impact of drugs, genetics, and related biological perturbations (alterations induced by external or internal mechanisms) on cellular states. The library database is based on the philosophy that typical human pathology, biology, and pharmacology are most aptly understood using a systems-level approach. It was constructed to generate a robust approach for perturbing a diversity of cell types, measuring cellular responses, integrating and analyzing data, and visualizing and interrogating the database for a variety of biomedical research applications [19]. This library allows researchers to access a wide variety of data by using a matrix consisting of cell type by experimental treatment by phenotypic assay. Using LINCS, researchers are able to inquire about information regarding mechanism-based relationships among the effects of different drug responses and their targets (perturbents) as well as associations among responding cellular components, in the format of network interactions and structure-function relationships [20].
In this study, we used an inflammasome PCR array containing 84 inflammasome-related genes to investigate the expression of inflammasomes during an inflammatory response to the bacterial endotoxin, lipopolysaccharide (LPS), in the rat brain during morphine tolerance. LINCS was then used to project possible candidate targets from the mRNA gene expression profiles generated from the PCR array analysis.

A 2 + 4 regimen was used to produce morphine tolerance in 7–8 mo old (250–350 g) male F344 rats [5,21,22,23,24]. The rats (n = 16) were randomly assigned into two groups. The morphine-tolerant group received two 75 mg morphine sulfate pellets (NIDA, Rockville, MD, USA) on Day 1 via subcutaneous (s.c.) implantation and four pellets on Day 2, whereas the control group received placebo pellets on both days. On Day 5, the two groups were randomly assigned to receive either LPS (250 µg/kg, Sigma, St. Louis, MO, USA) or saline (vehicle) [5,21,22,23,24]. Thus, the four experimental groups were placebo-control + saline, placebo-control + LPS, morphine-tolerant + saline, and morphine-tolerant + LPS. Two hours after the treatment with LPS or saline, the animals were euthanized and the brains were harvested.

2.3. RNA Isolation and Preparation of cDNA

The expression of 84 key genes involved in the function of inflammasomes, general NLR signaling, and cytokine and chemokine genes was quantified using a custom PCR array and RT2 SYBR Green Fluorescein qPCR Master Mix (SABiosciences, Frederick, MD, USA), according to the manufacturer’s protocol. Using an ABI Prism 7900HT Fast Detection System (Applied Biosystems, Foster, CA, USA), real-time PCR was performed by first denaturing the PCR mix at 95 °C for 10 min, followed by 40 cycles at 95 °C for 15 s and at 60 °C for 1 min.

The expression of each gene was normalized to housekeeping genes and calculated using the ∆∆Ct method. The threshold and baseline values were set manually, and the resulting threshold cycle values (Ct) were analyzed using the PCR array data analysis template supplied on the manufacturer’s website [25]. The mean fold change in mRNA expression from 3 to 5 biological replicates was considered significant at p < 0.05. The gene profile signatures were created for every two groups compared.

The differentially expressed genes were input into the Query App (apps.lincscloud.org/query), as described previously [26,27]. Based on the LINCS database, LincsCloud utilized gene profile signatures generated from the PCR array to generate a report, including probability outcomes in terms of gene knockdown effects and drug mimics. The scores given in the report evaluated how much a particular set of gene regulation features (named pertubagens) was likely to be connected with the genes listed in the LINCS report. Positive readings in the Consensus Knockdown Connections in the report indicate that knockdown of the genes listed in the LINCS report would match the gene changes input into the Query App, and thus the genes with high scores represent potential target genes for the experimental treatment.

3.1. Expression Profile of Inflammasome-Related Genes Following an LPS Challenge, with and without Morphine Tolerance

3.2. Expression Profile of Inflammasome-Related Downstream Signaling Genes Following an LPS Challenge, With and Without Morphine Tolerance

3.3. Expression Profile of Inflammasome-Related Chemokine and Cytokine Genes after an LPS Challenge, with and without Morphine Tolerance

The results from our study indicate that, in the rat brain, LPS-induced inflammation involves both the inhibition of the NLRP12 anti-inflammatory inflammasome and the stimulation of downstream regulators such as Birc3, thereby increasing the expression of pro-inflammatory chemokines and cytokines. However, in the morphine tolerant state, the response to LPS is dampened, as indicated by the reduced expression of inflammasome-related genes. LINCS analysis confirmed that the response to LPS is altered during morphine tolerance and indicated that VPS28 may be one of the genes responsible for the alterations associated with morphine tolerance.

The authors thank Louaine L. Spriggs for her excellent editorial assistance. Funding for this study was provided, in part, by National Institutes of Health (NIH)/National Institute on Drug Abuse (NIDA) grants R01 DA007058 and K02 DA016149 to Sulie L. Chang. 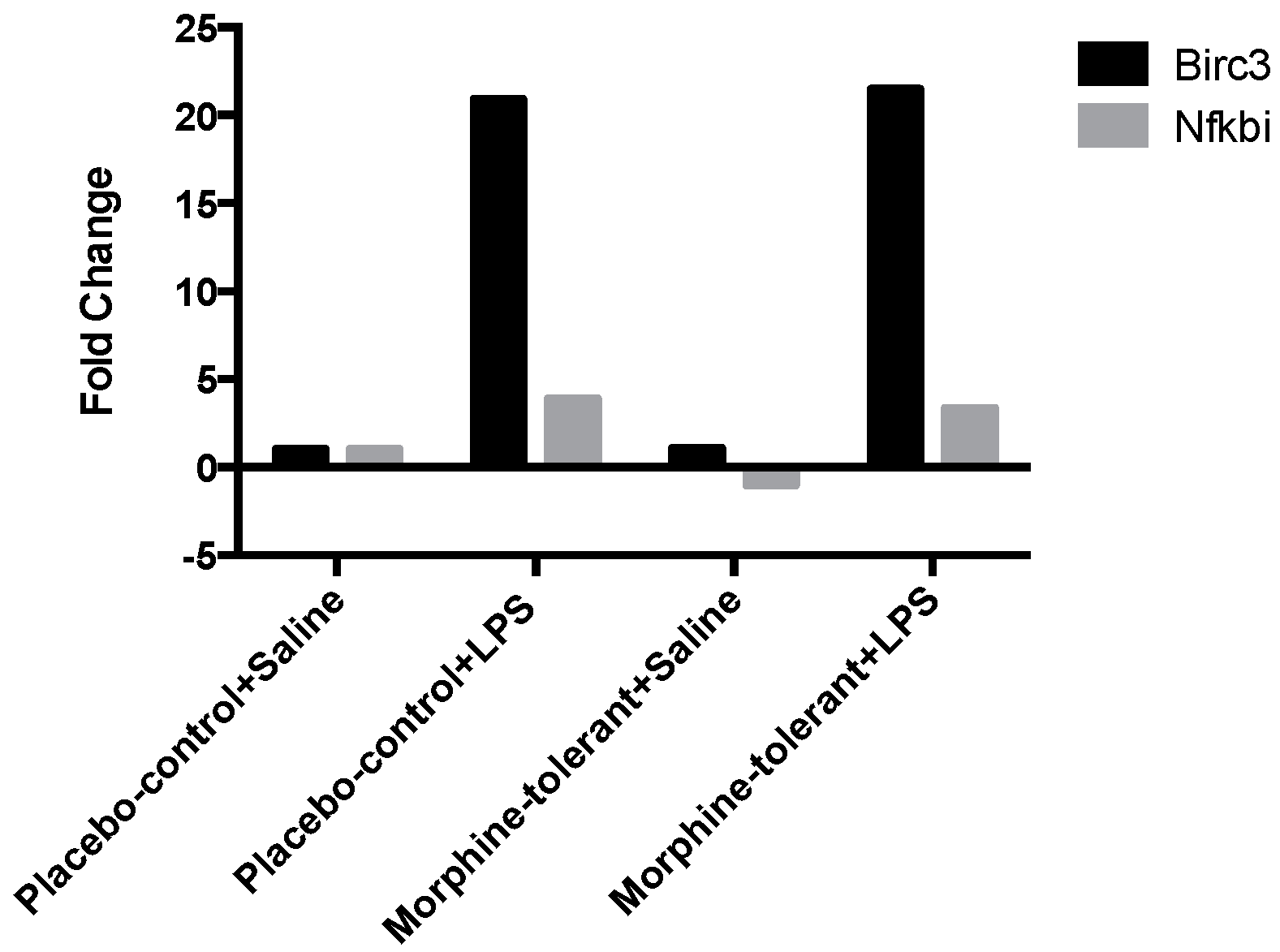 Table 2. Expression profile of inflammasome-related downstream signaling genes in the rat brain in response to lipopolysaccharides (LPS), with and without morphine tolerance. Full name of the genes were provided in Appendix Table A1.
* For p-value, letters in red mean p < 0.05. ** For Fold Change, letters in red mean fold change >2 and letters in blue mean the fold change <−2. For the color line,