Genetic Pathways to Insomnia
Next Article in Special Issue

Preconditioning of Spatial and Auditory Cues: Roles of the Hippocampus, Frontal Cortex, and Cue-Directed Attention
Previous Article in Special Issue

Motor learning in the cerebellum is believed to entail plastic changes at synapses between parallel fibers and Purkinje cells, induced by the teaching signal conveyed in the climbing fiber (CF) input. Despite the abundant research on the cerebellum, the nature of this signal is still a matter of debate. Two types of movement error information have been proposed to be plausible teaching signals: sensory error (SE) and motor command error (ME); however, their plausibility has not been tested in the real world. Here, we conducted a comparison of different types of CF teaching signals in real-world engineering applications by using a realistic neuronal network model of the cerebellum. We employed a direct current motor (simple task) and a two-wheeled balancing robot (difficult task). We demonstrate that SE, ME or a linear combination of the two is sufficient to yield comparable performance in a simple task. When the task is more difficult, although SE slightly outperformed ME, these types of error information are all able to adequately control the robot. We categorize granular cells according to their inputs and the error signal revealing that different granule cells are preferably engaged for SE, ME or their combination. Thus, unlike previous theoretical and simulation studies that support either SE or ME, it is demonstrated for the first time in a real-world engineering application that both SE and ME are adequate as the CF teaching signal in a realistic computational cerebellar model, even when the control task is as difficult as stabilizing a two-wheeled balancing robot. View Full-Text
Keywords: cerebellum; motor learning; climbing fiber; robot control; neural network model cerebellum; motor learning; climbing fiber; robot control; neural network model
►▼ Show Figures 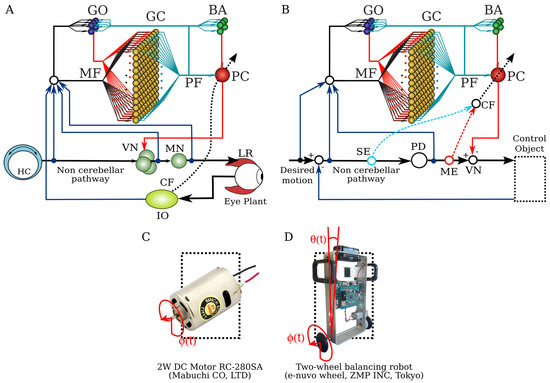