Postural Correlates of Pollution Perception
Next Article in Special Issue

:
Subliminal stimuli are gaining growing interest due to their capability to induce desensitization to pathologically feared (e.g., phobic) pictures without inducing exaggerated emotional reactions. However, unresolved methodological issues cast significant doubt on the reliability of these findings and their interpretation. The studies most robustly assessing stimulus detection found that ~30% of the supposed-to-be-subliminal stimuli were, in fact, detected, suggesting that the beneficial effects attributed to subliminal stimuli may result from those actually seen. Nevertheless, a deeper analysis of the data underlying this misinterpretation unveils theoretical and clinical implications. Since the purpose of subliminal stimulation is to reduce the aversiveness of exposure therapies while maintaining their efficacy, researchers should measure the emotional relevance of supposed-to-be-subliminal stimuli that are, in fact, detected. A distinction is needed between perceptually- and emotionally-subliminal stimuli: the former is not consciously detected; the latter just fails to elicit emotional reactions. Emotionally-subliminal stimuli could represent an intermediate step of exposure in addition to those involving perceptually subliminal or supraliminal stimuli. Importantly, emotionally subliminal stimuli could make patients able to sustain a conscious exposure to feared stimuli without exaggeratedly reacting to them: if confirmed by empirical data, this unexpected disconfirmation of patients’ beliefs could pave the way for successful therapy while increasing their self-efficacy and compliance to treatment.
Keywords:
subliminal; unconscious; subthreshold; fear; phobia; desensitization; exposure therapy

1. Putting the Mental Back in Exposure Therapies

Can we reduce fear by merely extinguishing its physiological outputs? Researchers investigating emotions should cautiously infer such an inseparable association between subjective states and their physiological correlates, Taschereau-Dumouchel and colleagues claimed [1]. The authors pointed out that “treatments developed using more objective symptoms as a marker of psychopathology have mostly been disappointing in effectiveness”, inviting future researchers to base new therapeutic protocols on subjective measures (e.g., self-reports) [1] or on their specific psychophysiological correlates [2].
Here, we collect this invitation by introducing an emotion-centered classification of subliminal stimuli to «put the “mental” back» in the scientific debate concerning the therapeutic efficacy of subliminal exposure therapies: in our opinion, the issue raised by Taschereau-Dumouchel and colleagues [1] cannot leave this emerging research line out of consideration.
The debate dates back to the seminal study by Öhman & Soares [3], demonstrating that subliminal phobic stimuli elicit physiological correlates of phobic reaction (e.g., electrodermal reactions) in the absence of the subjective feeling of fear. Despite their efficacy, traditional exposure therapies are hardly accepted by the majority of phobic patients, and their clinical success is significantly affected by motivational factors [4]. Thus, the possibility of obtaining a comparable reduction of phobic symptoms through a safer, subliminal exposure gained a growing interest [5,6]. The observation that these protocols subliminally induced habituation in physiological reactions to phobic stimuli led some researchers [7] to incautiously compare their efficacy to that of traditional exposure therapy, despite the most clinically-relevant component of phobia (i.e., the subjective feeling of fear) was unaffected [6]. The root causes of this paradox (i.e., considering a phobia successfully treated even if phobic stimuli still induce subjective fear) lie in the inappropriate overlap between subjective emotions and their physiological and/or behavioral correlates [8,9]. In addition to the terminological confusion between these distinct concepts [9], the original definition of “subliminal pictures” as stimuli that are perceptually undetectable and unrecognizable [3] set unnecessary limitations to their therapeutic use. While the detectability criterion is fundamental in perception research, to “maintain the efficacy of exposure but reduce its aversiveness” [10] is more relevant for the exposed stimuli to be emotionally irrelevant rather than perceptually unseen. The definition of subliminal stimuli should adapt to include the possibility that stimuli supposed to be subliminal can fail to induce the expected subjective emotion even when they are, in fact, detected. While this possibility was never directly tested by any study, a deeper analysis of the scientific literature suggests that this hypothesis is already beyond mere speculation.

Can a phobic stimulus fail to elicit fear thanks to its reduced duration, even if consciously detected? From the systematic review of the studies on subliminal phobic stimulations [6], it is reasonable to derive this conclusion. In fact, studies adopting a trial-by-trial assessment of stimulus awareness found that stimuli supposed to be subliminal were occasionally perceived: as an example, Sebastiani and colleagues excluded 27.7% (10/36) of participants because they detected several stimuli supposed to be subliminal lasting 20 ms [11]. These numbers highlight the relevance of performing a trial-by-trial check of stimulus detection, the neuroimaging correlates of which could represent a potential marker of neuropsychiatric disorders (as already reported in response to supraliminal stimuli [12]). Nevertheless, most of the reviewed studies failed to assess the effectiveness of masking on a trial-by-trial basis, making it hard to discern whether the results reported should be ascribed to the processing of unperceived stimuli rather than to the processing of the few stimuli possibly perceived despite the masking technique [6]. Ignoring this evidence, authoritative authors [10,13] keep considering as “subliminal” even phobic stimuli that are merely “very briefly” exposed (i.e., lasting 30 ms, as compared to an average of 20.5 ms adopted by different authors in 17 comparable studies [6]). Even in the absence of a trial-by-trial assessment of stimulus detection, the observed habituation effects were described as the result of “masked” phobic stimuli [13], allowing an “unconscious emotional learning” [10].
The concerns we have raised do not diminish the relevance of these results: rather, we think that a more rigorous interpretation could increase their impact. Indeed, the same authors also assessed the fear ratings following each block of stimuli: they found no significant increase in fear in phobic participants briefly exposed to phobic stimuli [13]. Given the low probability that every stimulus was successfully masked, we should consider the possibility that even phobic stimuli that were consciously detected were too brief to induce the conscious feeling of fear. This evidence would fit with our idea that the nervous circuits involved in detecting and fearing a phobic stimulus are different and should be integrated into a therapeutic protocol targeting both top-down and bottom-up processes involved in desensitization [5,6]. This could finally affect the “feeling a feeling” level described by Damasio [14] that could be erroneously thought to overlap perfectly with the subjective threshold of perception (i.e., the moment at which subjects can first discriminate stimuli, even if at a chance level [15]). The observation that very brief phobic stimuli can be detected without being feared is only compatible with the hypothesis that the emotional reaction (intended as the moment at which subjects can verbalize feeling fear) does not overlap with the ability of subjects to detect the stimulus, i.e., that perceptual threshold slightly precedes the emotional threshold (Figure 1). This hypothesis is consistent with the use of mental imagery as an early step of systematic desensitization, based on the assumption that merely thinking to feared stimuli represents a perceptually and emotionally weaker version of its clearly-visible exposure [16]—despite the significant differences in the networks activated by these exposure paradigms [17]. Indeed, fMRI correlates of the amygdala and inferotemporal visual cortex covaried in response to emotional picture exposure, linearly increasing with stimulus’ emotional salience [18]: the coupling between the conscious detection of a stimulus and its emotional (subjective and/or psychophysiological) correlates should be considered as a continuum.
Despite this evidence, there are currently no terminological differences to distinguish the reasons for which stimuli can fail to elicit the expected emotional response (i.e., missed detection or very-brief duration). To avoid further misunderstandings adding to those that already affect this research line [9,19], the introduction of a new category of “subliminal stimuli” is needed, distinguishing between “perceptually-subliminal” and “emotionally-subliminal” stimuli: the former corresponds to the traditional meaning of “subliminal” (i.e., consciously undetected, unreportable); the latter indicates emotional (e.g., fearful) stimuli that do not trigger the corresponding conscious feeling (e.g., fear) even if consciously perceived. In our opinion, this distinction—apparently negligible but actually essential—would allow therapists to find the perfect balance between treatment’s efficacy and acceptability: efficacy is best reached after a conscious exposure to phobic stimuli as subliminal exposure alone does not affect subjective fear [6]; acceptability is best reached if these stimuli are very brief (but not necessarily unseen).
Rather than perceptually-subliminal stimuli proposed by other authors [10], we propose that emotionally-subliminal stimuli could represent the best compromise between the acceptability and efficacy of exposure therapies (Figure 1).

3. How Emotionally-Subliminal Stimuli Could Improve Our Understanding and Treatment of Pathological Fear

Methodological concerns in the research line investigating the effects of subliminal exposure to phobic clues push for introducing an emotional threshold in stimulus processing. We propose to define a stimulus as emotionally subliminal if it does not induce—even if consciously perceived—the expected emotional reaction. As the observation that even unconscious stimuli induced psychophysiological correlates of fear [3] gave rise to a relevant scientific debate [6], the observation that even conscious stimuli can fail to induce subjective fear—if confirmed by dedicated experiments—could represent a turning point for the future of this research line.
Indeed, distinguishing between perceptually- and emotionally subliminal stimuli could significantly improve the understanding of emotions as well as the therapeutic protocols used to treat pathological fear. 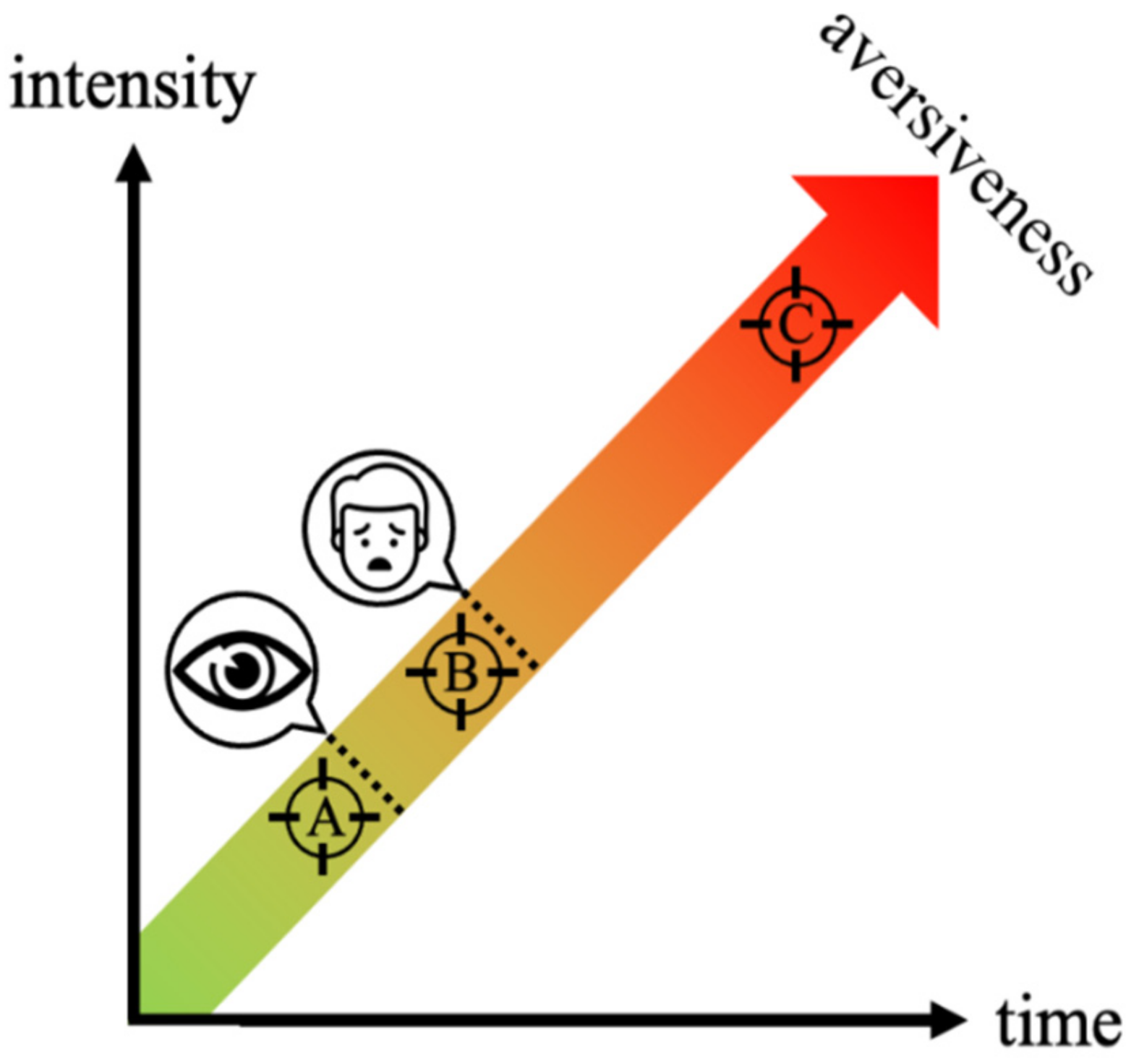 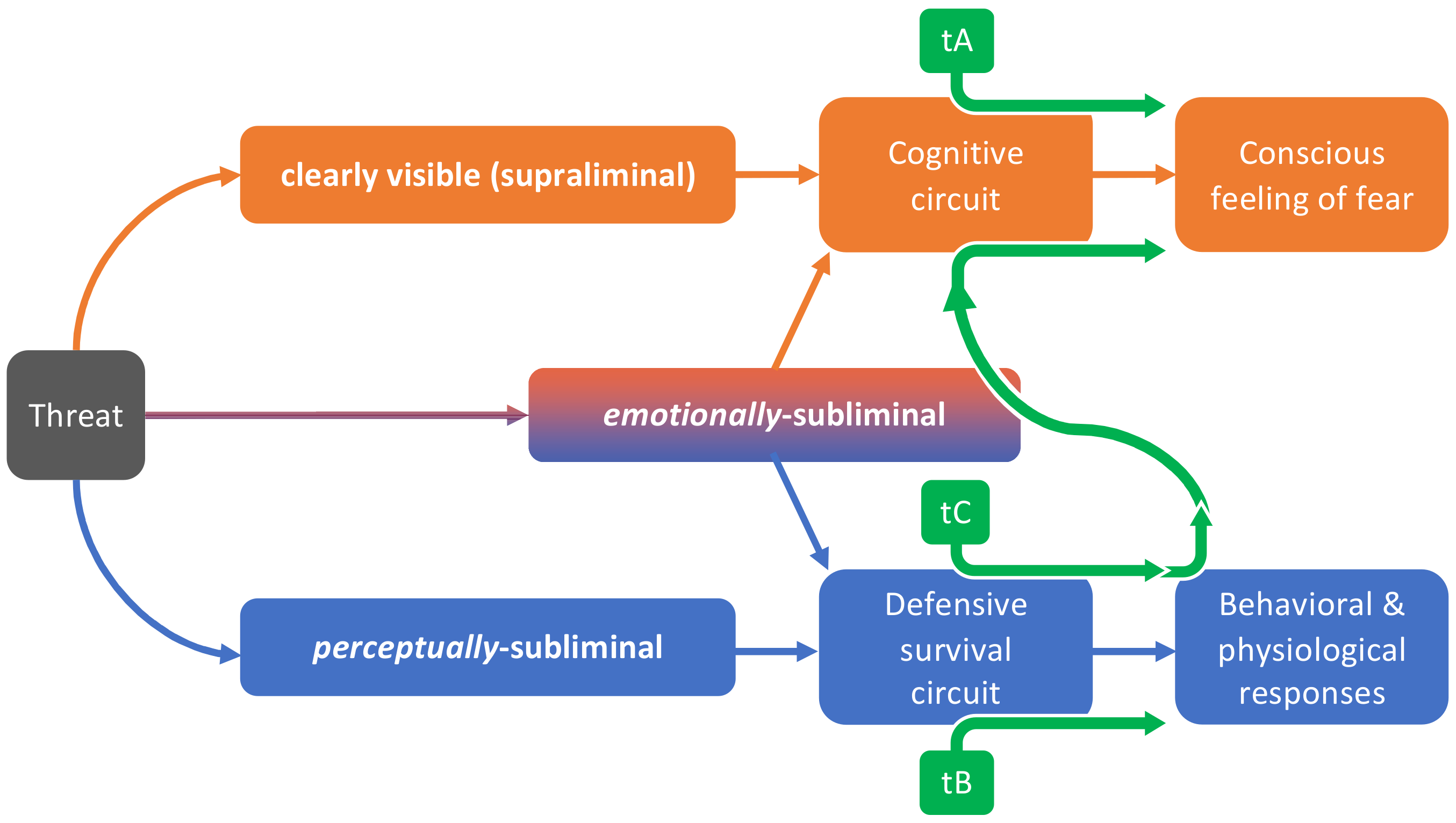