Background: There is growing interest in the use of new biomarkers such as glycated albumin (GA), but data are limited in acute ischemic stroke. We explored the impact of GA on short-term functional outcomes as measured using the modified Rankin Scale (mRS) at 3 months compared to glycated hemoglobin (HbA1c). Methods: A total of 1163 AIS patients from two hospitals between 2016 and 2019 were included. Patients were divided into two groups according to GA levels (GA < 16% versus GA ≥ 16%). Results: A total of 518 patients (44.5%) were included in the GA ≥ 16% group. After adjusting for multiple covariates, the higher GA group (GA ≥ 16%) had a 1.4-fold risk of having unfavorable mRS (95% CI 1.02–1.847). However, HbA1c was not significantly associated with 3-month mRS. In addition, GA ≥ 16% was independently associated with unfavorable short-term outcomes only in patients without diabetes. Conclusions: In light of these results, GA level might be a novel prognostic biomarker compared to HbA1c for short-term stroke outcome. Although the impact of GA is undervalued in the current stroke guidelines, GA monitoring should be considered in addition to HbA1c monitoring. View Full-Text
Keywords: glycated albumin; glycated hemoglobin; brain ischemia; stroke; prognosis; biomarkers; blood glucose glycated albumin; glycated hemoglobin; brain ischemia; stroke; prognosis; biomarkers; blood glucose
►▼ Show Figures 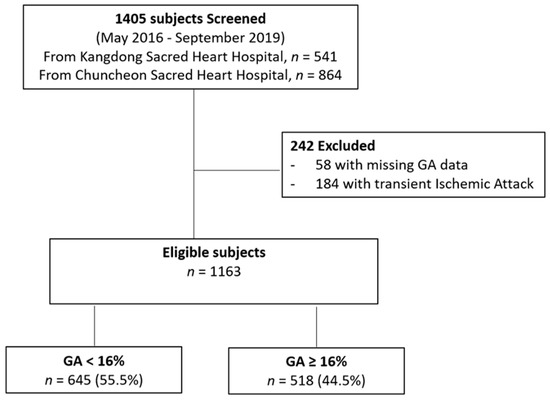