Is Right Angular Gyrus Involved in the Metric Component of the Mental Body Representation in Touch and Vision? A tDCS Study
Next Article in Special Issue

No Evidence of Perceptual Pseudoneglect in Alexithymia
Previous Article in Journal

NeuroDante: Poetry Mentally Engages More Experts but Moves More Non-Experts, and for Both the Cerebral Approach Tendency Goes Hand in Hand with the Cerebral Effort

:
Neuroaesthetics, the science studying the biological underpinnings of aesthetic experience, recently extended its area of investigation to literary art; this was the humus where neurocognitive poetics blossomed. Divina Commedia represents one of the most important, famous and studied poems worldwide. Poetry stimuli are characterized by elements (meter and rhyme) promoting the processing fluency, a core aspect of neuroaesthetics theories. In addition, given the evidence of different neurophysiological reactions between experts and non-experts in response to artistic stimuli, the aim of the present study was to investigate, in poetry, a different neurophysiological cognitive and emotional reaction between Literature (L) and Non-Literature (NL) students. A further aim was to investigate whether neurophysiological underpinnings would support explanation of behavioral data. Investigation methods employed: self-report assessments (recognition, appreciation, content recall) and neurophysiological indexes (approach/withdrawal (AW), cerebral effort (CE) and galvanic skin response (GSR)). The main behavioral results, according to fluency theories in aesthetics, suggested in the NL but not in the L group that the appreciation/liking went hand by hand with the self-declared recognition and with the content recall. The main neurophysiological results were: (i) higher galvanic skin response in NL, whilst higher CE values in L; (ii) a positive correlation between AW and CE indexes in both groups. The present results extended previous evidence relative to figurative art also to auditory poetry stimuli, suggesting an emotional attenuation “expertise-specific” showed by experts, but increased cognitive processing in response to the stimuli.
Keywords:
EEG; alpha; theta; frontal theta; frontal alpha asymmetry; skin conductance response; neuroaesthetics; neurocognitive poetics; time; Divina Commedia

Given the evidences that time is a crucial point for highlighting a differential response between experts and non-experts, a multiple approach to the collected data has been conducted. In particular, Leder and colleagues reported that, considering a 10 s exposure to visual art, experts reported higher declared understanding in comparison to non-experts [46]; therefore, such time point has been considered in Section 3.1, but extending the analysis to the first, central and last 10 s of the exposure to the poetry stimuli. In addition, since Codispoti and colleagues [61] found differences when considering the first and second half of the reaction to emotional videos, in the present study, the same approach has been applied to poetry stimuli and is reported in Section 3.2. Furthermore, we also analyzed the neurophysiological reaction to the entire stimuli, in order to test whether the length of the poetry stimuli would influence the perception by experts and non-experts; such results are reported in Section 3.3. Finally, we investigated the eventual difference between experts and non-experts concerning the relative higher activity in response to poetry or paraphrase; the results have been reported in Section 3.4.

3.1. Analysis of the First, Central and Final 10 s of the Stimuli

Considering the listening to the Paradiso, a significantly higher GSR level for NL in comparison to L students during the first 10 s (Chi2 = 4.80, p = 0.03) was shown. On the contrary, for the same time period, the NL group showed lower CE values than the L group (Chi2 = 4.24, p = 0.04). Any difference was found by the logistic regression analysis between the groups for the other cantiche and temporal segments and for any other index.
Concerning the GSR index (Figure 1), ANOVA analysis showed a significant interaction among the variables CANTICA×TIMEPOINT×GROUP (F(4,104) = 2.80, partial eta-squared = 0.10, p = 0.03). In particular, the post-hoc analysis evidenced significant differences within each group. In fact, despite Paradiso eliciting significantly higher (at least p < 0.05 for all the pairwise comparisons) GSR values for both groups, in comparison to the other cantiche at all the investigated time points (first, central and final 10 s), only for the NL group did the first 10 s elicit higher GSR values in comparison to the central and final 10 s temporal segments (Paradiso first 10 s vs. Paradiso central 10 s p < 0.01 and Paradiso first 10 s vs. Paradiso last 10 s p < 0.001).

3.2. Analysis of the First and Second Half of the Stimuli

3.3. Analysis of the Activity Elicited during the Listening to the Entire Cantica

3.4. Analysis of the Relative Activity Elicited by Poetry and by the Paraphrase

Statistical analysis showed a different frequency distribution of the content recall between the two groups, higher for L group in comparison to the NL group for Inferno and Paradiso (Fisher’s exact test p = 0.049 and p < 0.001, respectively) (Figure 3 top). Moreover, concerning the appreciation of the cantica, the L group showed higher rates of participants who appreciated the cantica in comparison to NL group for Paradiso and Purgatorio (Fisher’s exact test p = 0.02 and p = 0.03, respectively) (Figure 3 center). Finally, concerning the self-declared recognition of the cantica, L students in comparison to NL students reported a larger number of participants who recognized Paradiso (Fisher’s exact test p = 0.02) (Figure 3 bottom).

We summarize, in relation to the experimental objectives stated at the end of the introduction section:
Future research may benefit from the combination between a systematic emotional assessment as formulated into the Aesthetic Emotions Scale (AESTHEMOS) [95] and the neurophysiological assessment, in experts and non-experts. This approach would provide further insight into the eventual relation between elements of the aesthetic experience evaluated through the AESTHEMOS scales (prototypical aesthetic emotions, epistemic emotions, and emotions indicative of amusement) and subscales.

This research was funded by was partially funded by “Ricerca di Ateneo” grant from University of Rome Sapienza.

The study was conducted according to the guidelines of the Declaration of Helsinki, and approved by the Institutional Ethics Committee of Sapienza University (protocol code RM11916B5ADDCB0B and 21 April 2016).

The data presented in this study are available on request from the corresponding author, without undue reservation.

Authors give thanks to all participants and the Cinecittà Experimental Cinematography Centre (Centro Sperimentale di Cinematografia di Cinecittà), as well as to its director Adriano De Santis and to the professional actor Roberto Antonelli who gave voice to the Divina Commedia cantica. 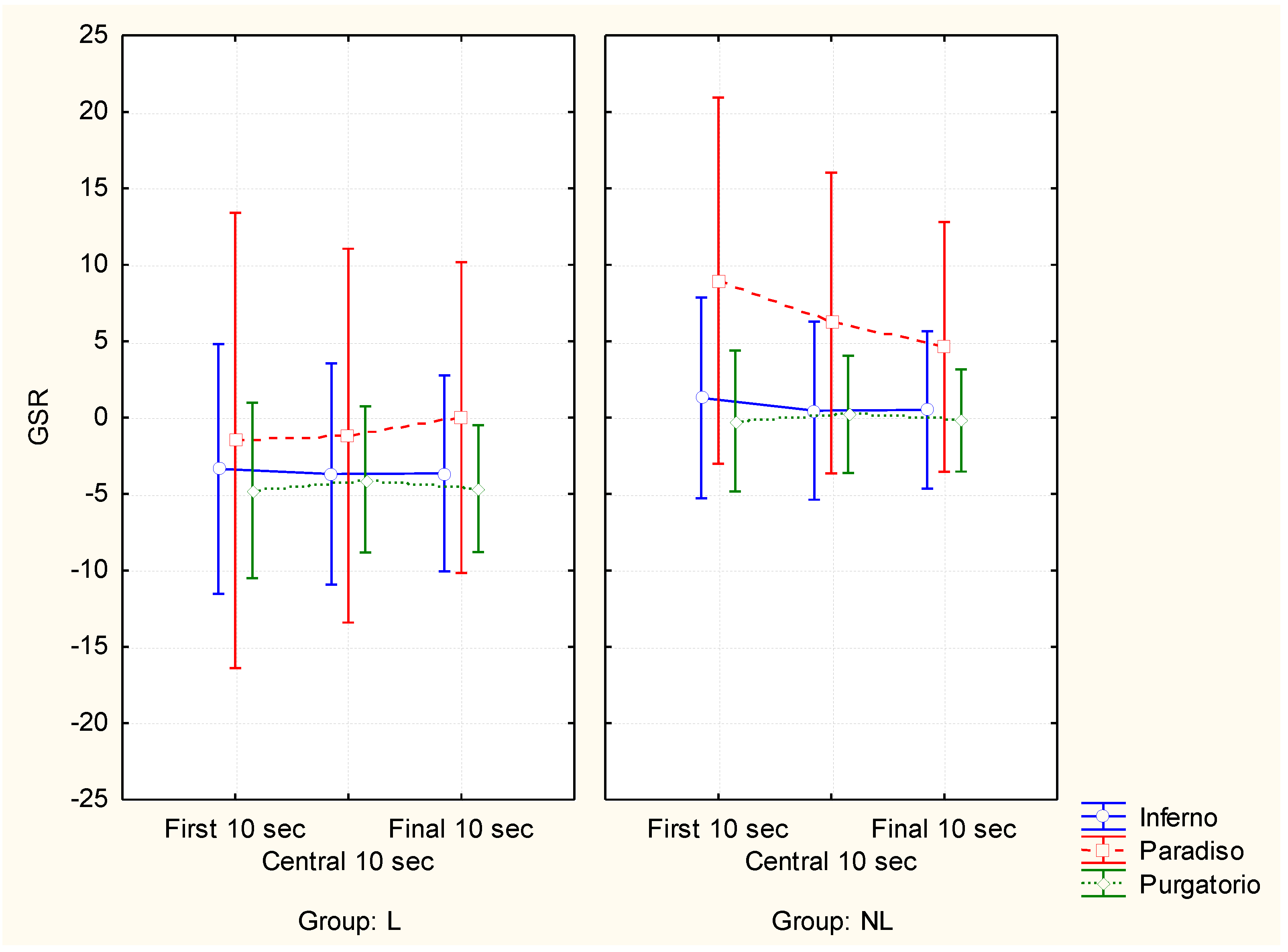 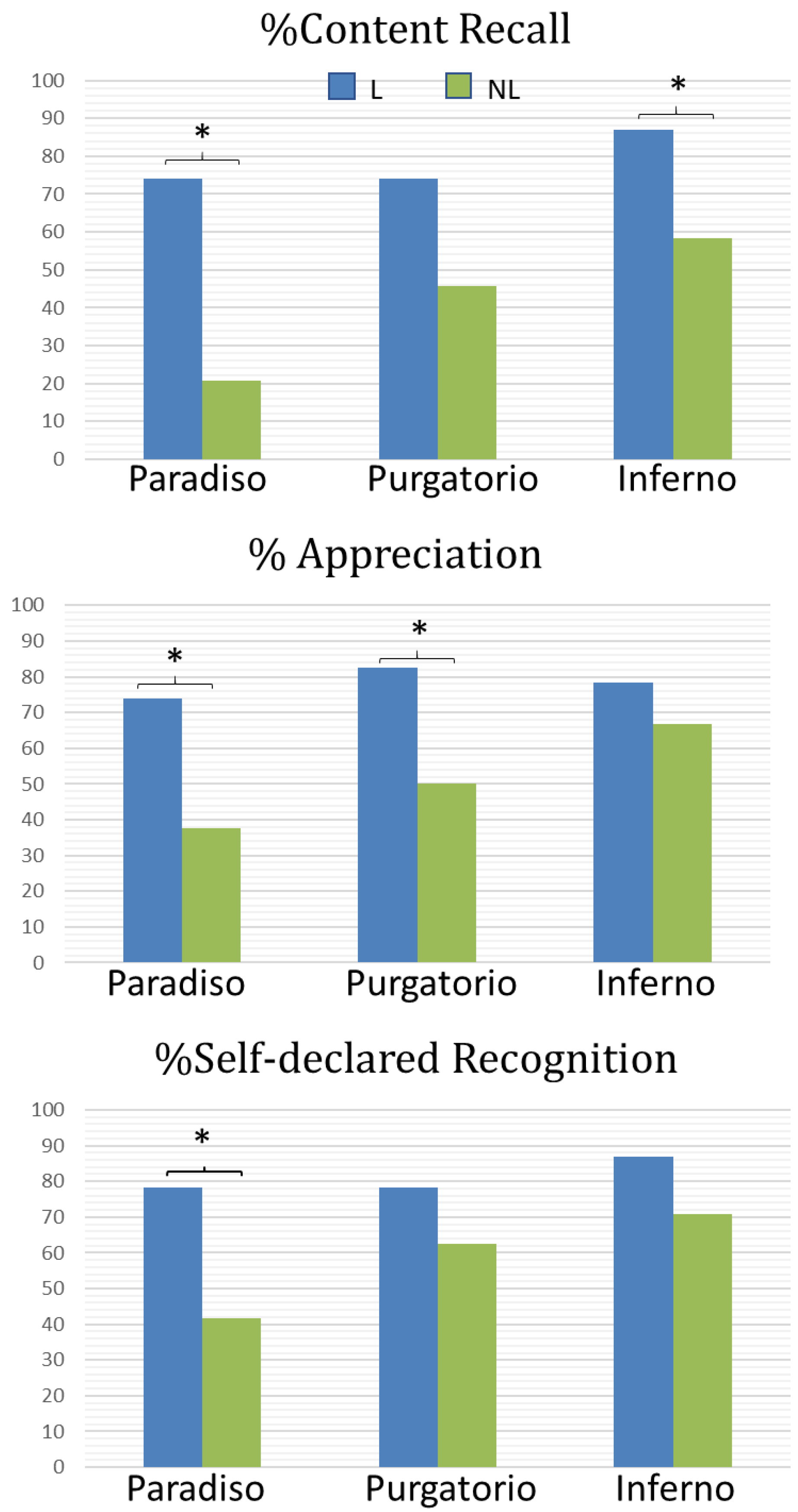