The Deficit of Multimodal Perception of Congruent and Non-Congruent Fearful Expressions in Patients with Schizophrenia: The ERP Study

Healthy volunteers were recruited through online or institutional advertisements. In total, 20 participants of the control group (mean = 26.3, SD = 5.32, 12 female, 8 male) with no history of schizophrenia or schizoaffective disorder, intelligence quotient (IQ) less than 80, or medical illness associated with increased rates of depression, completed the study.
Twenty-two patients with schizophrenia (mean = 28.1, SD = 5.19, 10 female, 12 male) were recruited via Alekseev’s Psychiatric Clinical Hospital after a diagnostic clinical interview (ICD-10) to determine the diagnosis. Inclusion criteria included individuals with a history of first or second psychosis. The severity of symptoms was assessed in participants using the Positive and Negative Syndrome Scale (PANSS) (average meaning 93.52 ± 15.7).
All subjects were right-handed, had normal hearing levels in both ears, and their intellectual skills were within the normal range. We analyzed hearing function in healthy subjects and patients using a PDD-401 audiometer (Piston Ltd., Budapest, Hungary) to identify hearing threshold levels. None of the examined subjects had any symptoms of hearing loss.

The ethics board of the Institute of Higher Nervous Activity and Neurophysiology of RAS (IHNA) approved the study protocol. Electroencephalography recordings and stimuli assessment were conducted with the permission of the ethical board of Alekseev Psychiatric Clinical Hospital. All participants provided written informed consent and received monetary compensation for their participation (500 rubles). The study followed the tenets of the Declaration of Helsinki.

The visual stimuli consisted of centered monochrome 800-×-800-pixel.jpeg images of scared women (see Figure 1 for examples). The images of scared women were purchased from internet databases (Can Stock Photo, Fotosearch) and the International Affective Picture System (IAPS), then centered and normalized for color, brightness, contrast, background, and face size using Adobe Photoshop.
The stimuli consisted of vocalizations of women crying and laughing, which were purchased from internet databases (Sound Jay, Sound Library, Freesound, Soundboard). The raw audio files were downsampled at a rate of 44,100 Hz to mono.wav files with 32-bit resolution. The sounds were presented using the software “Presentation” (Version 20.2, Neurobehavioral Systems, Inc., Berkeley, CA, USA). All files were then normalized for root-mean-square (RMS) amplitude and modified with respect to the stimulus length using Wavelab 10.0 (Steinberg). Twenty-four original audio files (10 screaming vocalizations and 7 laughing) were submitted to pilot perceptual validation by 19 adults (students) in the pilot experiment. After the pilot study, we selected sounds with the highest rates of “pleasant” (for laughter) and “fearful” (for screaming) with the most similar rates of “arousal” and the most similar physical characteristics (duration, pitch, and loudness).
Auditory stimuli were 1500 ms (±17 ms) in the duration of sounds of women screaming and laughing, equalized by average pitch and volume.
Finally, we had three images of screaming women, three sounds of screaming vocalizations, and three sounds of laughing vocalizations. After a pilot study, we concluded that different images with their own vocalizations induced the most pronounced emotional response and excluded addictive effects, so for each image of screaming women we selected the appropriate vocalization
The standard (congruent) stimulus was the simultaneously presented image and sound of a screaming woman 1500 ms long. The deviant (non-congruent) stimulus simultaneously presented an image of a screaming (frightened) woman and the sound of her laughter 1500 ms long. We used three types of stimuli to exclude the addictive effect.

The participants sat in front of the screen. The instruction was to listen to a sound and look at the screen. The stimuli were presented via a pair of TDH-39 headphones. Two types of multimodal visual–voice stimuli with semantical incoherence were presented: the same emotional expression and an incoherent emotional expression. An odd-ball passive paradigm was used with EEG event-related potentials (80% coherent and 20% incoherent). We made three trials of two conditions (coherent/incoherent) with three parameters (three kinds of sounds and images for the condition to avoid an addictive effect). The stimuli were presented in random order. Participants were instructed to “view and listen to stimulation, don’t close eyes and try not to think about something special.” Visual stimuli were presented for 1500 ms centrally on a 17″ LCD monitor with a 60/120 Hz screen refresh rate; participants sat 80 cm away from the screen. The interstimulus interval randomly varied from 1000 ms to 2500 ms.

Immediately before the main experimental series (when the EEG helmet was placed on the subject’s head), we asked participants to assess their states on a scale from 1 to 9: “Sad,” “Happy,” “Angry,” “Scared,” and “Relaxed.”

After the subject listened to the whole set, they were presented with the image of a sad face and the sound of crying (congruent stimulus) on the same monitor with the scales. They were then required to evaluate the stimulus on scales of 1 to 9 for each of the following terms: “sad,” “happy,” “angry,” “fearful,” and “calm.” After filling in the scales, four incongruent stimuli were presented, which the subject evaluated on the same scales. If difficulties arose in understanding the task, the subject was assisted by the researcher.

EEG was acquired using a 19-channel EEG amplifier Encephalan with the recording of polygraphic channels (Poly4, Medicom MTD, Taganrog, Russian Federation). The sampling rate was 250 Hz. The amplifier bandpass filter was nominally set to 0.05–70 Hz. AgCl electrodes (Fp1, Fp2, F7, F3, Fz, F4, F8, T3, C3, Cz, C4, T4, T5, P3, Pz, P4, T6, O1, and O2) were placed according to the International 10–20 system. The electrodes placed on the left and right mastoids served as joint references under unipolar montage. The vertical oculogram was recorded with AgCl cup electrodes placed 1 cm above and below the left eye, and the horizontal EOG was acquired by electrodes placed 1 cm lateral from the outer canthi of both eyes. The electrode impedances were kept below 10 kΩ. The EEG fragments did not contain any epileptiform activity (exclusion criteria).

The EEG data were processed using a 0.5–30 Hz bandpass filter (finite impulse response filter). The 50 Hz power frequency noise was subject to notch processing. The reference electrode was changed to a global brain average reference. Artefacts due to eye movement were excluded by independent ICA component analysis by an ICA-based algorithm with the EEGLAB plugin for MatLab 7.11.0 (MathworkInc., Natick, MA, United States). Muscle artefacts were cut out through manual data inspection. Finally, 111.3 ± 5.3 artefact-free EEG epochs of congruent stimuli and 26.8 ± 2.8 epochs of non-congruent stimuli in the control group and 112.5 ± 5.8 and 27.1 ± 2.9 epochs in the group of patients were applied for further data analysis.
The segments of interest were located within the whole data file and extracted with encephalograph proprietary software Encephalan EEGR 19/26. For the ERP analyses, the EEG data were analyzed and processed using EEGLAB 14.1.1b, which is a neural electrophysiological analysis tool based on MATLAB (MathWorks, Natick, MA, USA). The EEG was segmented from 100 ms prior to initiation to 800 ms after the stimulus onset. Amplitude and latency of each component were calculated for each participant in both groups separately for statistical analysis.

Amplitude and latency of each component were calculated for each participant in both groups separately for statistical analysis. For the ERP analyses, the EEG data were analyzed and processed using EEGLAB 14.1.1b, which is a neural electrophysiological analysis tool based on MATLAB (MathWorks, Natick, MA, USA). The EEG data were processed using a 1.6–30 Hz bandpass filter (finite impulse response filter). The 50 Hz power frequency noise was subject to notch processing. The reference electrode was changed to a global brain average reference. Artefacts due to eye movement were excluded by independent component analysis. The EEG was segmented from 100 ms prior to initiation to 800 ms after the stimulus onset. In this study, the amplitudes and latencies of N50, P100, N200, P3a, and P3b were measured and analyzed. Based on the topographical distribution of the grand-averaged ERP activity, the following sets of electrodes for each component were chosen: Fz, F3, F4, Сz, C3, C4 were selected for the analysis of N50 (30–90 ms) and P100 components (90–160 ms); N200 components (160–250 ms), were analyzed at the Fz, F3, F4, Cz, C3, C4, Pz, P3, P4, O1, O2 electrode sites; P3a components (220–300 ms) were analyzed at the F3, Fz, F4, Cz, C3, C4 electrode sites; and P3b components (250–500 ms) were analyzed at the Cz, C3, C4, Pz, P3, P4, O1, O2 electrode sites. The individual maximum peak amplitude was extracted for each component for each subject using MATLAB (MathWorks, Natick, MA, United States). In the cases where subjects had no well-defined peak (as in the case of P3a in group of patients) we used a time window of 20 ms around maximum to extract averaged amplitude.

Statistical analysis was carried out with STATISTICA 13 (TIBCO Software, Palo Alto, CA, USA). Differences between groups, differences in amplitudes, and latencies of ERP components, as well as subjective ratings, were assessed using a nonparametric Mann–Whitney u-test followed by post-hoc comparison (Bonferroni, p < 0.05). The repeated-measures ANOVA was used to assess separately for the attraction of two effects: condition (standard stimulus and deviant stimulus) * group.
The correlation analysis between subjective ratings and ERP data was calculated using Spearman rank correlations with Bonferroni correction (p < 0.05) separately for each group of subjects. All reported values of Spearman r-test had a power more than 80%. The inside group differences between amplitude and latency of ERP components of congruent and non-congruent stimuli for each ERP component were calculated using non-parametrical Wilcoxon rank tests.

3.1. Differences in Subjective Ratings of Stimuli

Groups did not differ in their individual ratings of self-assessments for the terms “Sad,” “Happy,” “Angry,” “Scared,” and “Relaxed.” Non-congruent stimuli were assessed as being happier by patients than by subjects of the control group (z = 2.6, p = 0.008); controls had 2.2 ± 1.8 scores on the scale “happy,” assessing non-congruent stimuli, versus the 5.3 ± 2.1 scores in patients.

3.2. Group Differences in ERP Components to Congruent and Non-Congruent Stimuli

3.3. Correlations between ERP and Subjective Ratings and PANSS

Patients with schizophrenia demonstrated altered ERPs reflecting the impaired multimodal perception of fearful stimuli compared to healthy controls. The differences were revealed both for the early and late stages of stimuli processing. Compared to healthy controls, patients had reduced amplitudes of N50 for non-congruent stimuli, which could be associated with sensory–perception abnormalities and the deficit of implicit perceptual memory during emotional multimodal recognition. Patients with schizophrenia also had higher amplitudes of P100 and N200 components, explained by impaired sensory gating. Moreover, P3a and P3b components’ reduced amplitude in patients could be associated with attention deficiency, less emotional arousal, or incorrect interpretation of emotional valence. The latter assumption was supported by a significant difference in the subjective ratings of emotions in the case of non-congruent stimuli in schizophrenia patients compared with healthy controls.

Those who conceived and designed the study include G.V.P., A.V.M., and N.V.Z., O.V.M., A.V.M., G.V.P. and N.V.Z. performed the experiments. A.V.M. and G.V.P. analyzed the data. G.V.P. and A.V.M. wrote the article. All authors have read and agreed to the published version of the manuscript.

This study was partially supported by funds within the IHNA state assignment of Ministry of Education and Science of the Russian Federation for 2019–2021 АААА-А17-117092040004-0. The funding organizations had no role in the design, conduct, analysis, or publication of this research.

The ethics board of the Institute of Higher Nervous Activity and Neurophysiology of RAS (IHNA) approved the study protocol.

The data that support the findings of this study are available on request from the corresponding author.

The authors declare that the research was conducted in the absence of any commercial or financial relationships that could be construed as potential conflicts of interest. 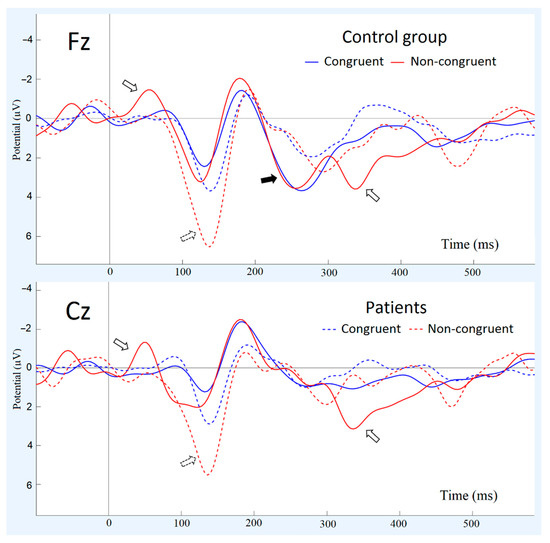 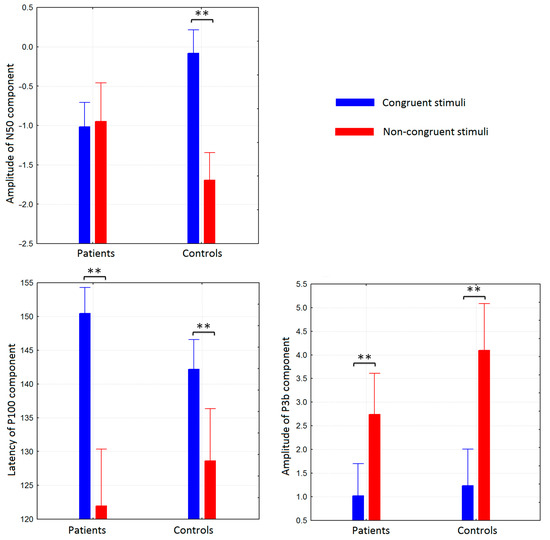 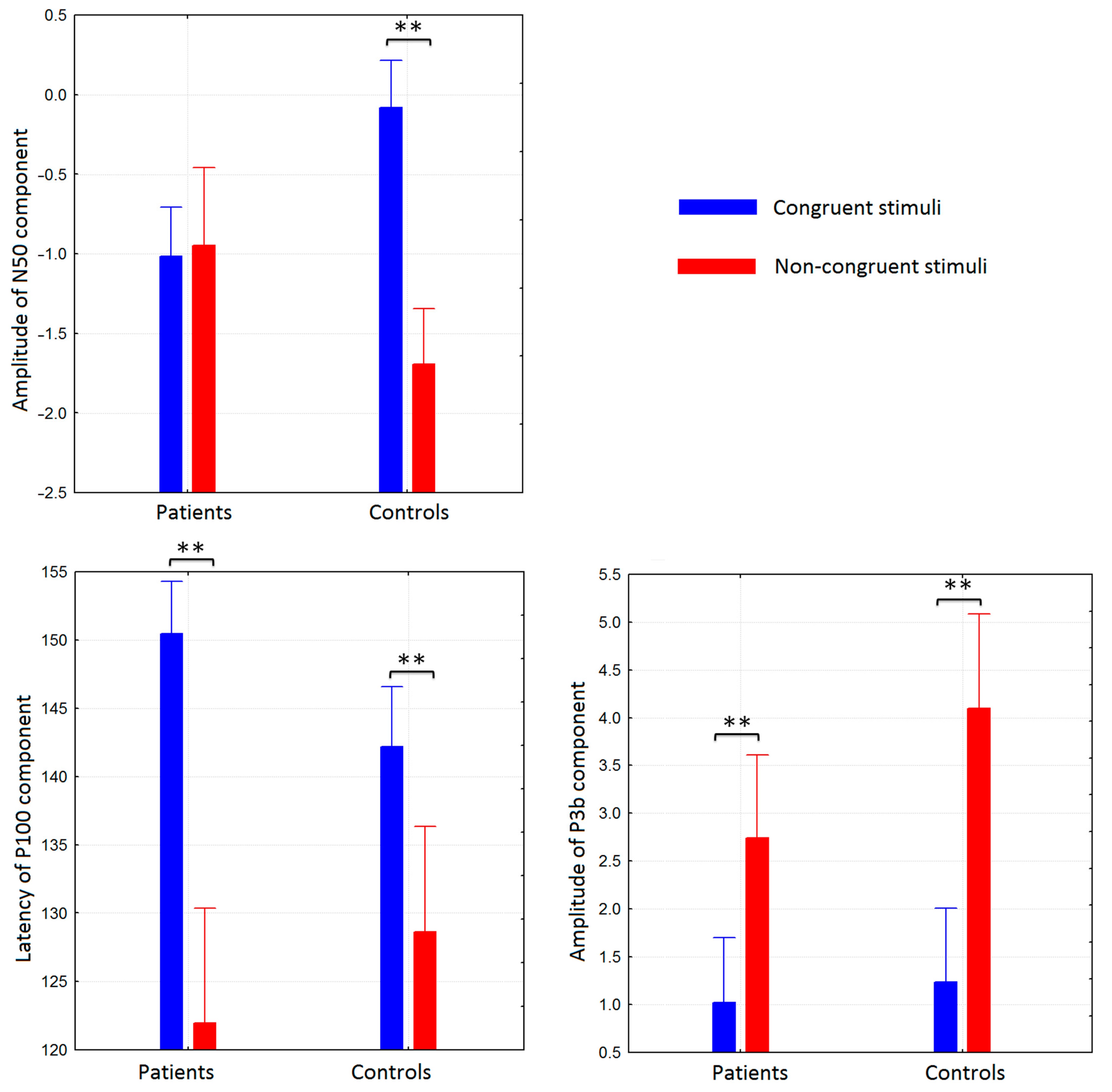 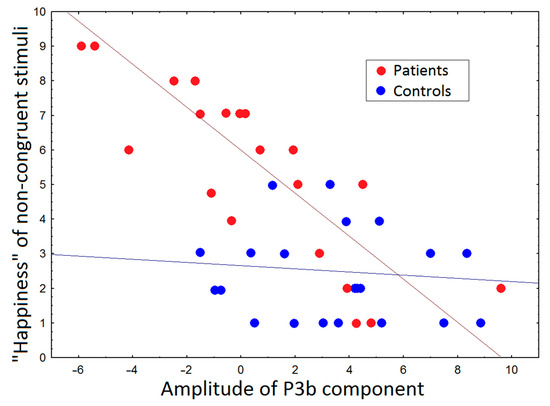