Stimulus Intensity Affects Variability of Motor Evoked Responses of the Non-Paretic, but Not Paretic Tibialis Anterior Muscle in Stroke
Previous Article in Journal

Immersive Virtual Reality in Stroke Patients as a New Approach for Reducing Postural Disabilities and Falls Risk: A Case Series

Gaze Palsy as a Manifestation of Todd’s Phenomenon: Case Report and Review of the Literature

Background: Though Todd’s phenomenon (TP) is a relatively rare occurrence, its correct identification is of key diagnostic and therapeutic importance as a stroke mimic. Here we describe a case of isolated gaze palsy as a manifestation of TP, discuss periictal gaze abnormalities as lateralizing sign involving the frontal eye field (FEF), and present a narrative literature review. Methods: We reviewed the main features of the case and conducted a structured literature search of TP and gaze palsy using PubMed. We restricted the search to publications in English, Spanish, French, and German. Case presentation: A 71-year-old male with a history of right frontotemporal subarachnoid hemorrhage was admitted to the Emergency Department of our institution after suffering a first unprovoked focal to bilateral tonic-clonic seizure with ictal gaze deviation to the left. Cranial imaging showed no signs of ischemia, intracerebral hemorrhage, or tumor. The patient presented the following postictal features: involuntary eye deviation to the right due to left-sided gaze palsy and disorientation in time with preserved responsiveness. Eye movements were normal three days later. We concluded that the patient suffered from new-onset epilepsy due to sequelae following the right frontotemporal subarachnoid hemorrhage, affecting the FEF with contralateral ictal gaze deviation, and postictal gaze palsy with ipsilateral eye deviation as an unusual Todd’s phenomenon. Conclusion: Unusual manifestations of TP are uncommon but clinically highly relevant, as they can mimic stroke or epileptic status and are decisive in the diagnostic and therapeutic decision-making process. Though postictal gaze palsy has been reported associated with other deficits, this constitutes, to our knowledge, the first report of isolated gaze palsy as a form of TP. Further research into the underlying causes is needed. Ictal contralateral gaze and head deviation, and probably postictal ipsilateral gaze deviation if present, are very helpful for the lateralization of the seizure-onset zone. View Full-Text
Keywords: seizure; Todd’s phenomenon; postictal deficits seizure; Todd’s phenomenon; postictal deficits
►▼ Show Figures 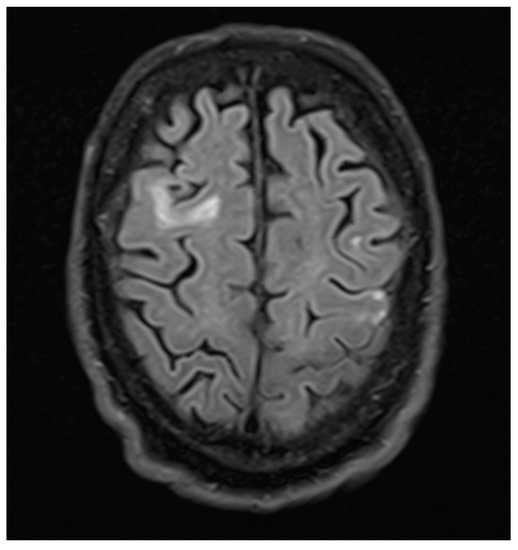