Inter-Day Reliability and Changes of Surface Electromyography on Two Postural Muscles Throughout 12 Weeks of Hippotherapy on Patients with Cerebral Palsy: A Pilot Study
Next Article in Special Issue

This study investigated the relationship between the structural characteristics of the left arcuate fasciculus (AF) reconstructed using diffusion tensor image (DTI) and the type of fluent aphasia according to hemorrhage lesions in patients with fluent aphasia following intracranial hemorrhage (ICH). Five patients with fluent aphasia following ICH (three males, two females; mean age 55.0 years; range 47 to 60 years) and with sixteen age-matched heathy control subjects were involved in this study. The ICHs of patients 1 and 2 were located in the left parietal lobe and the left basal ganglia. ICHs were located in the left anterior temporal of patient 3, the left temporal lobe of patient 4, and the left frontal lobe of patient 5. We assessed patients’ language function using K-WAB (the Korean version of the Western Aphasia Battery) and reconstructed the AF using DTI. We measured DTI parameters including the fractional anisotropy (FA), tract volume (TV), fiber number (FN), and mean diffusivity (MD). All patients showed neural tract injury (the decrement of FA, TV, and FN and increment of MD). The left AFs in patients 1 and 2 were shifted from Broca’s and Wernicke’s territories. The destruction of Wernicke’s territory resulted in conduction or transcortical sensory aphasia in patients 3 and 4. The structural difference of the AF in patients following ICH in the left hemisphere was associated with various types of fluent aphasia. View Full-Text
Keywords: arcuate fasciculus; aphasia; intracranial hemorrhage; diffusion tensor image arcuate fasciculus; aphasia; intracranial hemorrhage; diffusion tensor image
►▼ Show Figures 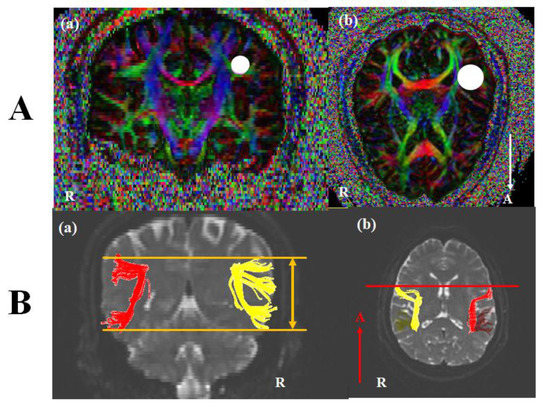