The Development of Brain Network in Males with Autism Spectrum Disorders from Childhood to Adolescence: Evidence from fNIRS Study
Previous Article in Journal

The Multilayer Network Approach in the Study of Personality Neuroscience

It has long been understood that a multitude of biological systems, from genetics, to brain networks, to psychological factors, all play a role in personality. Understanding how these systems interact with each other to form both relatively stable patterns of behaviour, cognition and emotion, but also vast individual differences and psychiatric disorders, however, requires new methodological insight. This article explores a way in which to integrate multiple levels of personality simultaneously, with particular focus on its neural and psychological constituents. It does so first by reviewing the current methodology of studies used to relate the two levels, where psychological traits, often defined with a latent variable model are used as higher-level concepts to identify the neural correlates of personality (NCPs). This is known as a top-down approach, which though useful in revealing correlations, is not able to include the fine-grained interactions that occur at both levels. As an alternative, we discuss the use of a novel complex system approach known as a multilayer network, a technique that has recently proved successful in revealing veracious interactions between networks at more than one level. The benefits of the multilayer approach to the study of personality neuroscience follow from its well-founded theoretical basis in network science. Its predictive and descriptive power may surpass that of statistical top-down and latent variable models alone, potentially allowing the discernment of more complete descriptions of individual differences, and psychiatric and neurological changes that accompany disease. Though in its infancy, and subject to a number of methodological unknowns, we argue that the multilayer network approach may contribute to an understanding of personality as a complex system comprised of interrelated psychological and neural features. View Full-Text
Keywords: personality neuroscience; individual differences; network neuroscience; multilayer network; five-factor model; symptom network personality neuroscience; individual differences; network neuroscience; multilayer network; five-factor model; symptom network
►▼ Show Figures 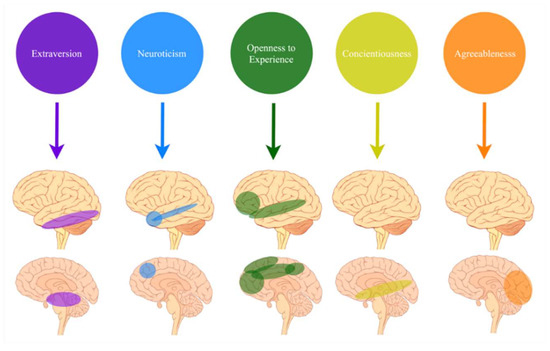