2. The Overview of Our Proposed Loitering Detection Method

Figure 1 shows the overall framework of our proposed loitering detection method. According to different scenarios, the method analyzes and calculates the size of the target activity area using the best adaptive fitting curve for loitering detection. An automatic alarm will be performed when loitering behavior occurs.
The previous research was based on simple scenarios and lacks reliability. This paper redefines and classifies loitering through the new perspective of pedestrian activity area. In the analysis of loitering in various situations, pedestrian activity areas were used to divide loitering behavior into three categories.
In the spacious and wide scene, normal pedestrians usually walk straight line with a strict goal [47]; the suspects are aimless. They keep loitering with a complex and disordered trajectory in order to not to be noticed. Figure 2 shows a rectangle loitering in the real scene. Through the trajectory map and analysis of suspicious target trajectory, the target’s area of motion is completely in the red rectangle. So, we call this type of loitering as rectangle loitering within a rectangle area.
In some small spaces, suspects with abnormal behavior loiter in a narrow area with back-and-forth movement. However, when the area of activity decreases, the distribution of target trajectory is dispersed, and the trajectory coordinate change greatly and discrete. The rectangular analysis method not satisfy this kind of small area movement, which will miss the judgment of loitering behavior. Figure 3 shows the different detection methods used for fitting the loitering in the same situation. The rectangle frame and ellipse frame were used to fit the same area of activity, and the shaded area was the difference of the area. So, it is necessary to propose ellipse detection in order to improve the accuracy of detection. Aiming at the narrow moving scene and the large return distance of target trajectory, an ellipse area fitting method is proposed. The trajectory of the suspect will constantly change. We first detected the convex hulls of all the trajectory points, and then used the ellipse fitting to solve the problem of uncertainty in the active area and the irregularity of the trajectory.
In some occasions, the suspects, such as thieves or drug dealers, are purposefully loitering around points of interest. Candamo [13] the author claims that the suspect’s motion is purposeful, for example, drug dealers focusing on the goals of interest, purposeful round trip loitering, to achieve drug dealing or stealing. This is very similar to the reality of the detection of dropped objects [48]. From the perspective of the mathematical model for analysis, this kind of activity area is similar to a sector. A sector loitering example is shown in Figure 4. The pedestrians’ activity area is fitted with a red sector which contains the motions of the pedestrian. We call this type of loitering as a sector loitering around a point in a sector area.

Loitering detection video is usually shot statically, and the background is changed slowly, mainly considering the impact of illumination, occlusion, and so on. In this paper, in order to achieve the purpose of detecting moving objects, GMM [49] is used to detect the target. The probability density of image gray level is estimated by the gray level difference between target and background, this method has high accuracy and objectivity. Multiple Gaussian models are selected to represent the feature distribution, then compared with the GMM. The EM iterative algorithm is used to solve the parameters of the GMM. Based on the existing library implementation algorithm, some parameter values are default values and complete the classification of target and background.
We established GMM fusion models in each pixel, the probability density function of a pixel at time is shown in Equation (1). where is the weight of the Gaussian model, is the mean vector of the Gaussian model, and is the covariance vector of n GMM fusion models. We used the EM algorithm to calculate the parameters of the GMM and posterior probability, set a new latent variable Z, and then transformed Equation (1) by variable Z to Equation (2).
Attain the posterior probability by the prior probability , and is likelihood probability. The posterior probability is shown in Equation (3).
From the Equation (3), the derivative expressions of three variables are shown in Equation (4). where Q is the number of all the pixels, we update the parameters to convergence by using Equations (3) and (4) so as to achieve the purpose of detecting moving objects; this method has high accuracy and objectivity.
After targets are detected, we used the MeanShift method to find the most likely target location in the current video frame [50]. The process of object tracking is to find a target position to make the Bhattacharyya coefficient maximize, it is defined in the following Formula (5). and represent the relative density functions of the discrete position and the target model, respectively. The specific flowchart of target tracking is shown in Figure 5.
Through the above method, we can track the pedestrian and get a series of tracking coordinates defined in Equation (6). where respectively, represent the position coordinates at the corresponding time. Figure 6 shows the motion trajectory. represents the trajectory of the target. We use Equation (7) to calculate the change of the pedestrian angle to select the feature points: where represents the direction vector’s angle value of the target at the different moment. is the angle threshold set to in our experiment if it meets the condition in the Equation (7) at a point, then we record this point as feature point .
The moment of the initial direction vector is the moment. Once a feature point is found, the direction vector will be replaced by the direction vector . The eigenvector of the trajectory is marked. As the number of eigenvectors appearing in the time exceeds 4, it needs to find corresponding loitering detection based on different activity area characteristics.

We use Equation (8) to establish an active rectangle frame to determine whether the pedestrian’s activity area is in a rectangle frame. A rectangle trajectory is defined as a trajectory contained within a rectangle, as shown in Figure 7.
In Equation (8), represents any coordinate in the period, represents the coordinates of moments, represents the coordinates of moments, and represents all coordinate points in the rectangular domain with and as diagonals.
We propose a dynamic rectangular frame to judge loitering, which avoids judging the motion trajectory of each frame in the video. The detailed of our algorithm is described in the Algorithm 1, where represents the initial threshold. In our experiments using PETS 2007 dataset, the time threshold is set to 60 s. The time threshold should be set according to different scenarios.

An ellipse trajectory is defined as a trajectory contained within an ellipse. We use the following steps to determine whether the pedestrian’s active area is in an ellipse area. Firstly, the Graham scan [51] method is used to find convex hulls for all track points in time , then ellipse fitting is performed. Figure 8 shows the process of finding a convex hull of a set of point.
In order to fit the ellipse, we use the general elliptic equation in Equation (9).
We used some constraints [52] so that we can directly use the coordinates of the trajectories to do the least square. The coefficients of the equation can be obtained using Equation (10).
Each coefficient is determined by its minimum value. Equation (11) can be obtained by the principle of extreme value.
Thus, we can get values, so that we can perform ellipse fitting on the given coordinates, calculate the optimal elliptic equation with least squares method. The detailed algorithm is described in the Algorithm 2.

When suspicious person loiters around the point of interest, suspect’s activity area revolves around one point. The displacement calculating cannot accurately determine whether pedestrians have abnormal behavior. Therefore, a sector trajectory is defined as a trajectory contained within a sector. As shown in Figure 9. Equation (12) is the loitering definition based on the sector.
The is the displacement between the initial detection coordinate and the current coordinate and and are the set thresholds. is the maximum value of the coordinate point displacement, while is the minimum value of the coordinate point displacement in the time . The detailed algorithm is described in the Algorithm 3.

In this paper, we first gave a loitering definition from a new perspective using pedestrian activity areas. We propose a loitering detection method based on pedestrian activity areas classification. The pedestrian loitering behaviors are divided into three categories, i.e., the rectangle loitering, the ellipse loitering and the sector loitering. Unlike other loitering detection algorithms judging the loitering only by trajectory angle or time, this paper converts complex trajectory processing into activity area fitting. The loitering is recognized if the pedestrian activity is detected and to be constrained in an area within a certain period of time. From the experimental results, the proposed three algorithms are very effective for detecting various loitering. No matter whether it is indoors or outdoors, it has good accuracy and robustness in loitering detection for both the PETS2007 dataset and our self-collected dataset. The proposed method can detect loitering in videos captured from different angles, and can be applied to crowded scenes also. Compared with the existing methods, the proposed method not only can detect some loitering that the existing methods could not detect, but also is practical to handle complicated situations, efficient, robust, and simplified in implementation. Self-adaptive time threshold setting for loitering detection in different scenarios is worth of further research. We will further research on this in the future.

All authors of the paper have made significant contributions to this work. T.H. and Q.H. contributed equally to the paper, conceived the idea of work, wrote the manuscript, and analyzed the experiment data. W.M. led the project, directed, and revised the paper writing. X.L., Y.Y., and Y.Z. collected the original data of the experiment and participated in programming. 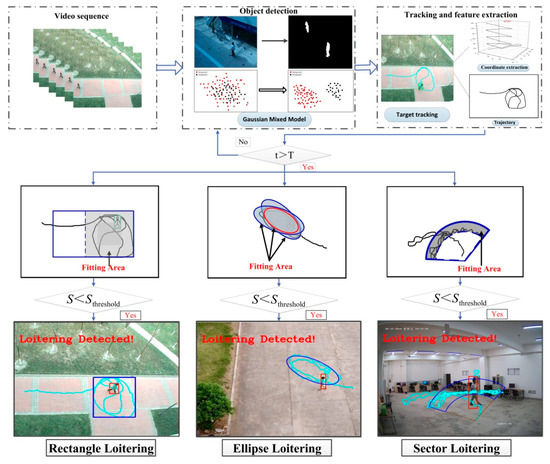 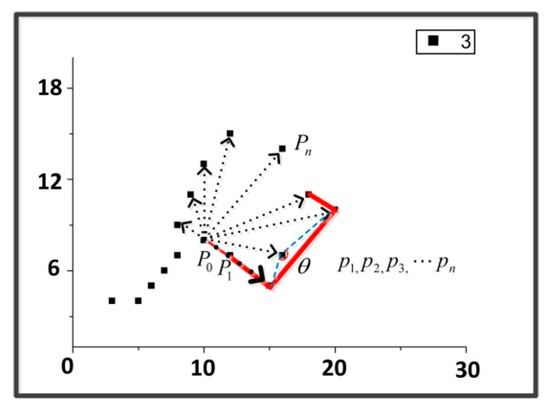 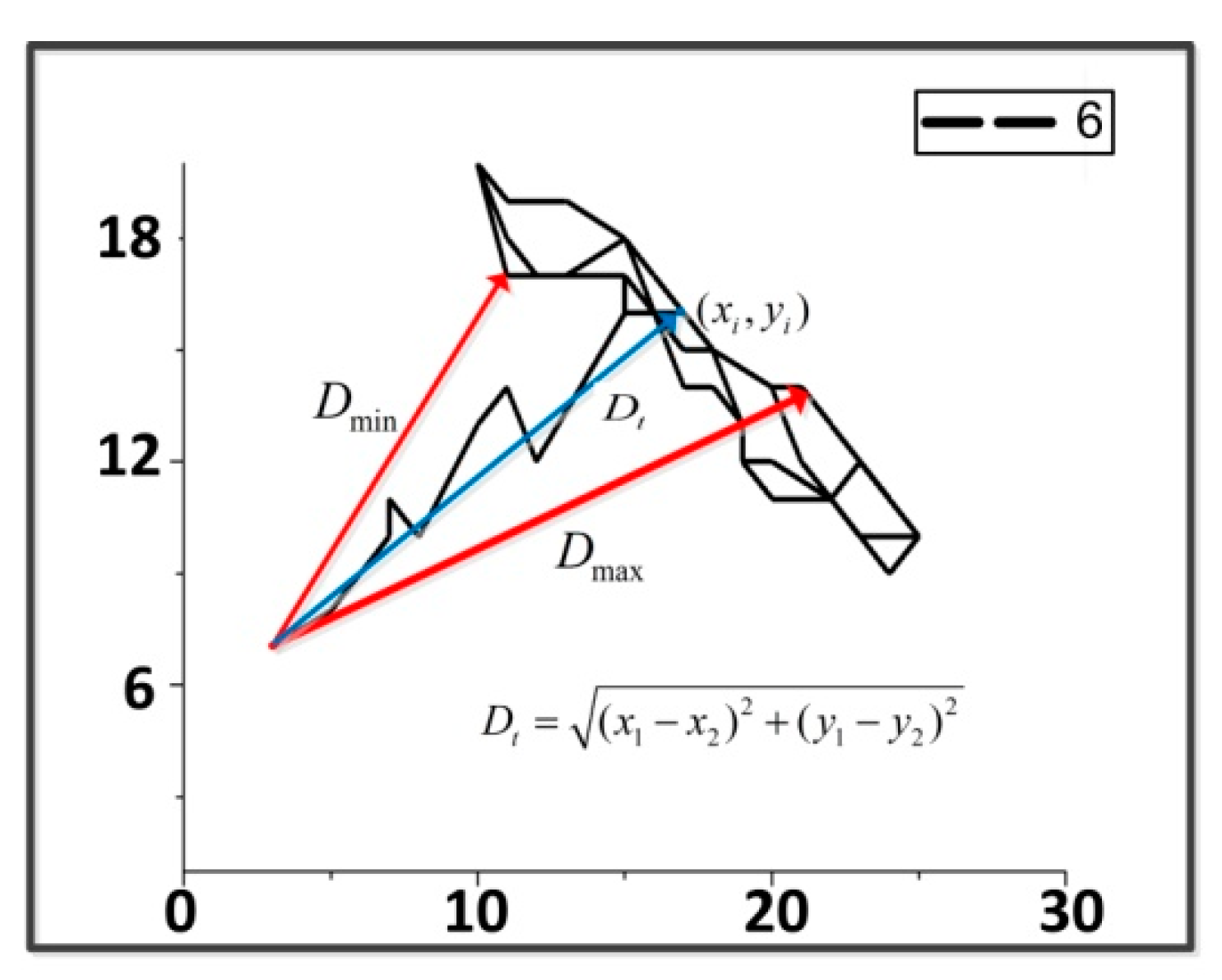 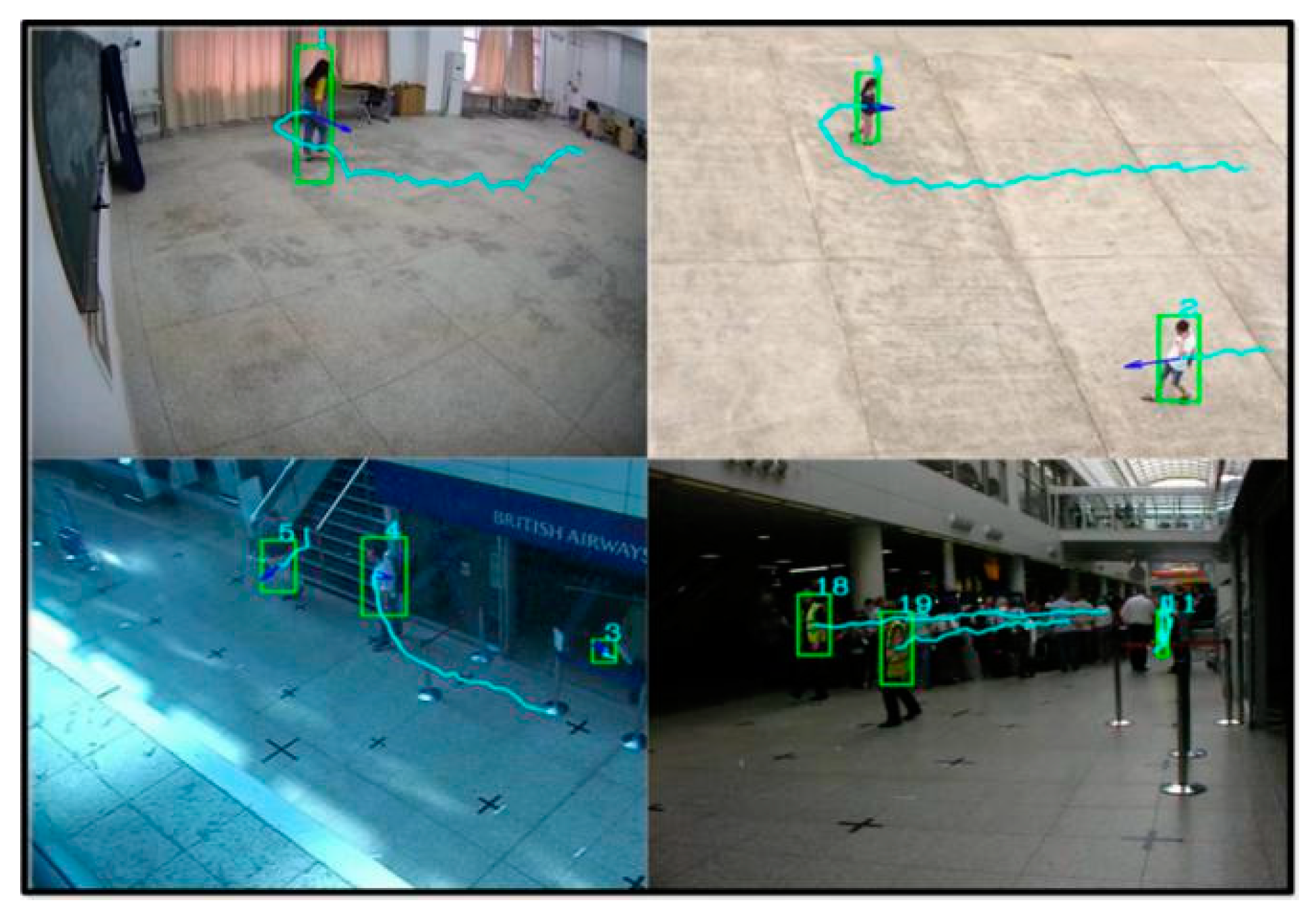 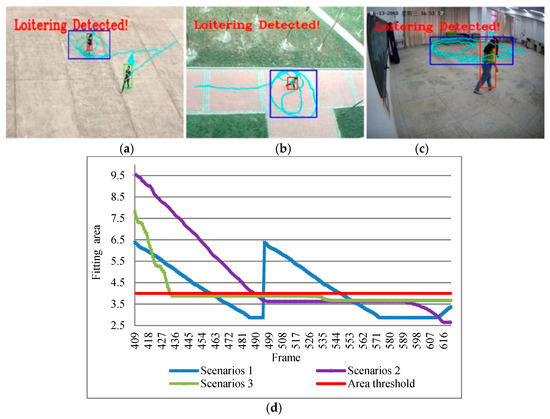 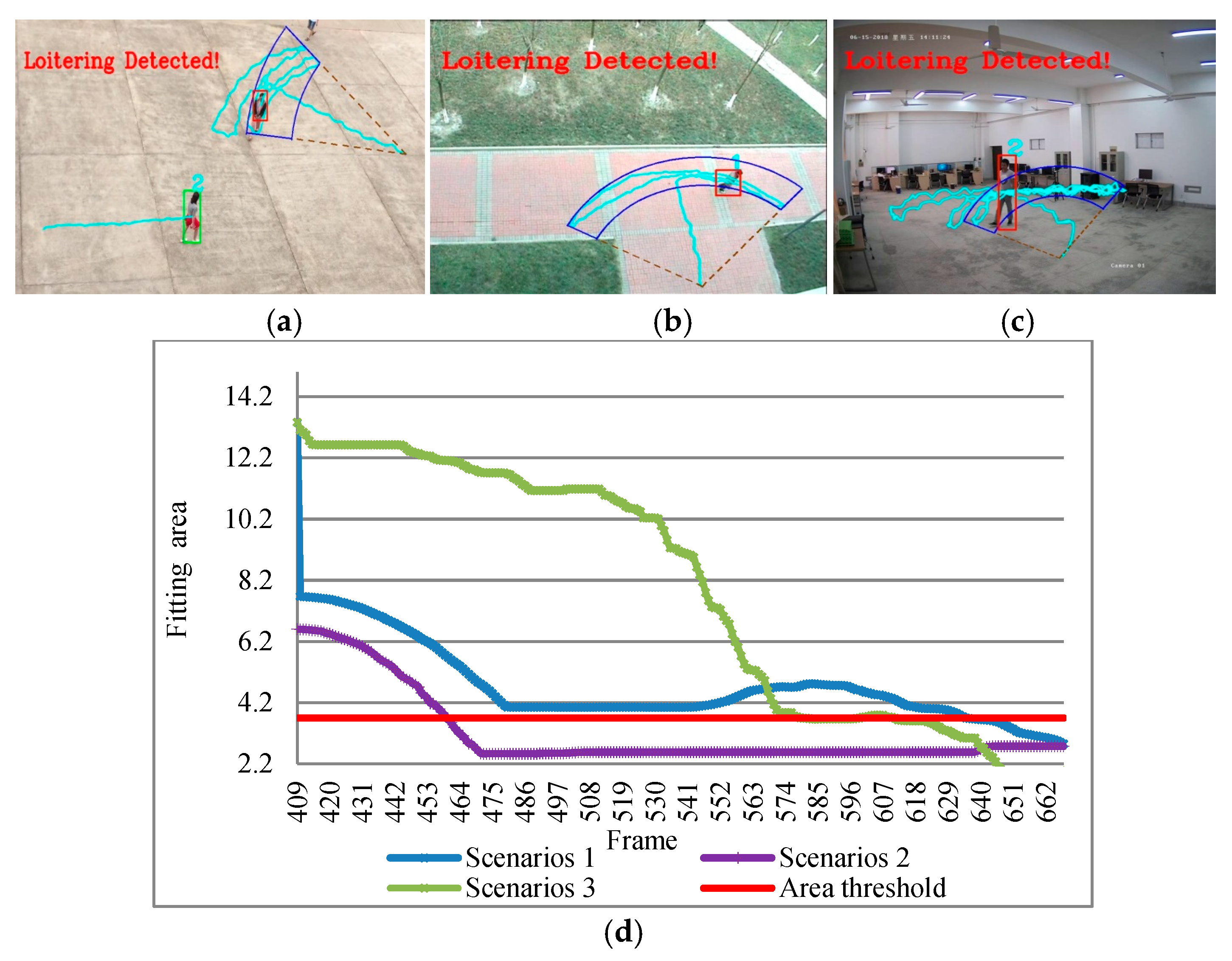