:
A low-cost Photoacoustic Computed Tomography (PACT) system consisting of 16 single-element transducers has been developed. Our design proposes a fast rotating mechanism of 360° rotation around the imaging target, generating comparable images to those produced by large-number-element (e.g., 512, 1024, etc.) ring-array PACT systems. The 2D images with a temporal resolution of 1.5 s and a spatial resolution of 240 µm were achieved. The performance of the proposed system was evaluated by imaging complex phantom. The purpose of the proposed development is to provide researchers a low-cost alternative 2D photoacoustic computed tomography system with comparable resolution to the current high performance expensive ring-array PACT systems.
Keywords:
Photoacoustic Computed Tomography (PACT); ring array; fast imaging; low cost

Photoacoustic imaging (PAI) is a promising imaging technique that combines higher imaging contrast of optical imaging with deeper penetration of ultrasonic imaging [1,2,3]. A nanosecond pulsed laser deposits energy onto a light absorbing sample, causing a local temperature increase and subsequent thermal expansion through the thermoacoustic effect [2,4,5,6,7,8]. This expansion causes a localized pressure increase, which propagates from the sample to be imaged, by an ultrasound transducer, similar to a traditional ultrasound detection system. PAI has gained popularity compared to other optical imaging techniques mainly due to its simultaneous great penetration depth and adequate resolution. PAI utilizes the deposition of diffusive photons and therefore can image at much greater depths [9,10] as compared to other high-resolution optical imaging modalities such as optical coherence tomography (OCT) [11,12]; OCT’s portability and high resolution however stand out in relevant applications [13,14]. As opposed to positron emission tomography (PET) and computed tomography (CT) that require the use of ionizing radiation, PAI uses safe, non-ionizing, visible and near-infrared light. Compared to magnetic resonance imaging (MRI) that requires sophisticated, large, and expensive designs, PAI is portable and cost-effective. PAI is capable of both functional and molecular imaging. PAI has proved to have a superior specificity in clinical diagnosis over conventional ultrasound imaging [15,16,17,18]. The wavelength dependence nature of PAI allows imaging of various molecules in biological tissues using endogenous and exogenous contrast agents [19]; e.g., tissue oxygen saturation can be measured using multispectral PAI [20,21,22]. The molecular imaging capability of PAI enables anatomical, and functional imaging of organelles, organs or even whole body of small animals, as well as many applications in human tissue analysis [19,23,24]. These advanced features have allowed PAI to play an important role in small animal imaging though different human diseases can be comprehensively studied. Furthermore, PAI can be integrated with other imaging modalities to generate multi-modality images that provide complementary information of the tissue.
There are two major implementations for PA imaging, i.e., photoacoustic computed tomography (PACT) and photoacoustic microscopy (PAM). PACT is used for deep tissue imaging applications where coarse resolution is acceptable. In PACT, high energy pulsed laser light is diffused to illuminate the entire tissue, which then generates photoacoustic waves. The waves around the tissue are collected by wideband ultrasound transducers, placed in the same plane, at radially symmetric angles, and ideally equidistant from the imaging target [25]. The detection scheme can be realized either by a single ultrasound transducer rotating around the sample, or a stationary ring array of 128, 256, or greater number of transducer elements [7,26,27]. Such configuration offers a fast image acquisition, but requires an expensive hardware and data acquisition unit. Moreover, PACT systems typically utilize bulky nanosecond pulsed laser sources, sometimes with an optical parametric oscillator (OPO). In addition to the light source, a major cost in these systems comes from the transducer arrays.
Some of the PACT systems developed are as follows. A 128-channel curved array PACT system was reported in [28] with 15–30 s rotation time to acquire a 2D image of the sample with a resolution of about 200 µm; rotating the animal for small animal in-vivo imaging is not recommended, also the long acquisition time does not allow imaging the hemodynamic changes (such changes occur with the frame rate of 2.5 Hz in small animals [29]). Gamelin et al. developed a fast, expensive, sophisticated 512-elements full ring PACT system that acquired images in less than one second [30]. The complexity and high cost of such a system prevents most researchers from developing PACT systems of their own. Therefore, strategies of decreasing the cost of PACT are needed. Some researchers have attempted to reduce the cost of ultrasound detection units by using partial view detection with reflectors [31] or using sparse arrays along with a compressed sensing reconstruction algorithm [32].
In [33], a multispectral PACT system was implemented where 8 single element transducers were utilized in an arc fashion. The system took around 30 s to acquire an image. In [25], a PACT system was developed using only two unfocused transducers, and a complete rotation was performed in 3s. In [34], a single element focused transducer-based PACT system was developed for in-vivo rat brain imaging. The total acquisition time was 16 minutes with a scanning step size of 1.5°. In [35], a spherical PACT system was developed to image zebra fish. The scanning step size was 0.75° with 480 scanning positions and 24 s acquisition time for each frame.
In this article, we present the development and characterization of a low-cost, fast PACT system that has been optimized to achieve 1.5 s temporal resolution with a 240 µm spatial resolution. The low number of elements (16) reduces the cost of the ultrasound unit as well as the need for an expensive DAQ. To reduce the cost of illumination, a Q-switched Nd:YAG laser was used. This comparatively lower-cost system provides fast, high-resolution images to potentially be used for small animal imaging. The performance of the system has been evaluated by imaging complex phantoms.

Using the calibration algorithm, the PA channel data was corrected before image reconstruction. Four randomly selected channel data are shown in Figure 3. Before calibration, each channel data consists of three reference signals: (i) the signal representing the transducer response, (ii) the PA signal coming from the imaging target and (iii) the PA signal coming from the tape. After calibration (blue solid), the PA signal from the imaging target is aligned. The reason that the PA signals are not located at the same sample number, is due to the non-uniform structure of the phantom. The improvement in the reconstructed image is evident in Figure 3e,j.
We initially performed a resolution analysis on a 2-legged phantom with 0.2 mm diameter lead as shown in Figure 4a. As the diameter of the lead is expected to be below the spatial resolution of the system, the width of the reconstructed image will spread to the resolution of the system. The length of each of the two branches was 6 mm. A 2D reconstructed image of the phantom is shown in Figure 4b. Taking a 1D intensity profile across the diameter of the object followed by a Gaussian fitting to the pixel values and calculating the full width at half maximum (FWHM) approximates the spatial resolution of the system. In Figure 4c, the FWHM is estimated to be 240 µm.
Next, the system was used to image a complex phantom comprised of 0.5 mm diameter lead with 8 branches (~7 mm in length). Figure 5a shows an image of the phantom positioned and aligned at the center of the ring. The phantom dimensions are shown in Figure 5b. The reconstructed image of the phantom is shown in Figure 5c.
Among different configurations of PAI, photoacoustic computed tomography is favored for small animal studies, e.g., hemodynamic brain imaging, whole body imaging, mainly due to its fast image acquisition. However the high-cost of the system has prevented the full establishment and wide utility of the device. Here we introduced a fast, low cost PACT system by replacing the sophisticated expensive ring array with a moving ultrasound sparse array. We demonstrated, by imaging sophisticated phantoms, that the system can produce images with a temporal resolution of 1.5 s and spatial resolution of 240 µm. This system promises a higher sensitivity in comparison to a commercial ring array due to the much larger number of view angles it uses and larger element size of the transducers. The cost of the proposed system compared to a full-ring array PACT is given in the table below (Table 3).

Although PAI has demonstrated great potential in preclinical and clinical applications, it is still in its early stage of development compared to already established medical imaging modalities such as MRI, CT, PET, and ultrasound imaging. Among several limitations preventing the wide application of PACT, manufacturing cost is the major one. Here, we explained the development of a fast, low-cost PACT system with only 16 single element transducers and a novel mechanical scanning design. Such configuration reduces the cost of the ring array PACT system drastically. A correction algorithm has been developed and applied to the acquired signals to make the transducers’ data equidistant from the imaging target. We have demonstrated that the system can produce images with a temporal resolution of 1.5 s and spatial resolution of 240 µm.
The system developed in this study will eventually be used for functional small animal brain imaging. We are currently developing a new system, using the same concept but smaller in size with 32 transducers, and an amplifier unit, to make a faster, compact PACT system with improved isotropic resolution.

This research was partially funded by the American Cancer Society, Research Grant number 14-238-04-IRG and the Albert and Goldye J. Nelson grant.

We are grateful to have constructive discussion with Jun Xia from University of Buffalo, NY regarding the reconstruction algorithm. 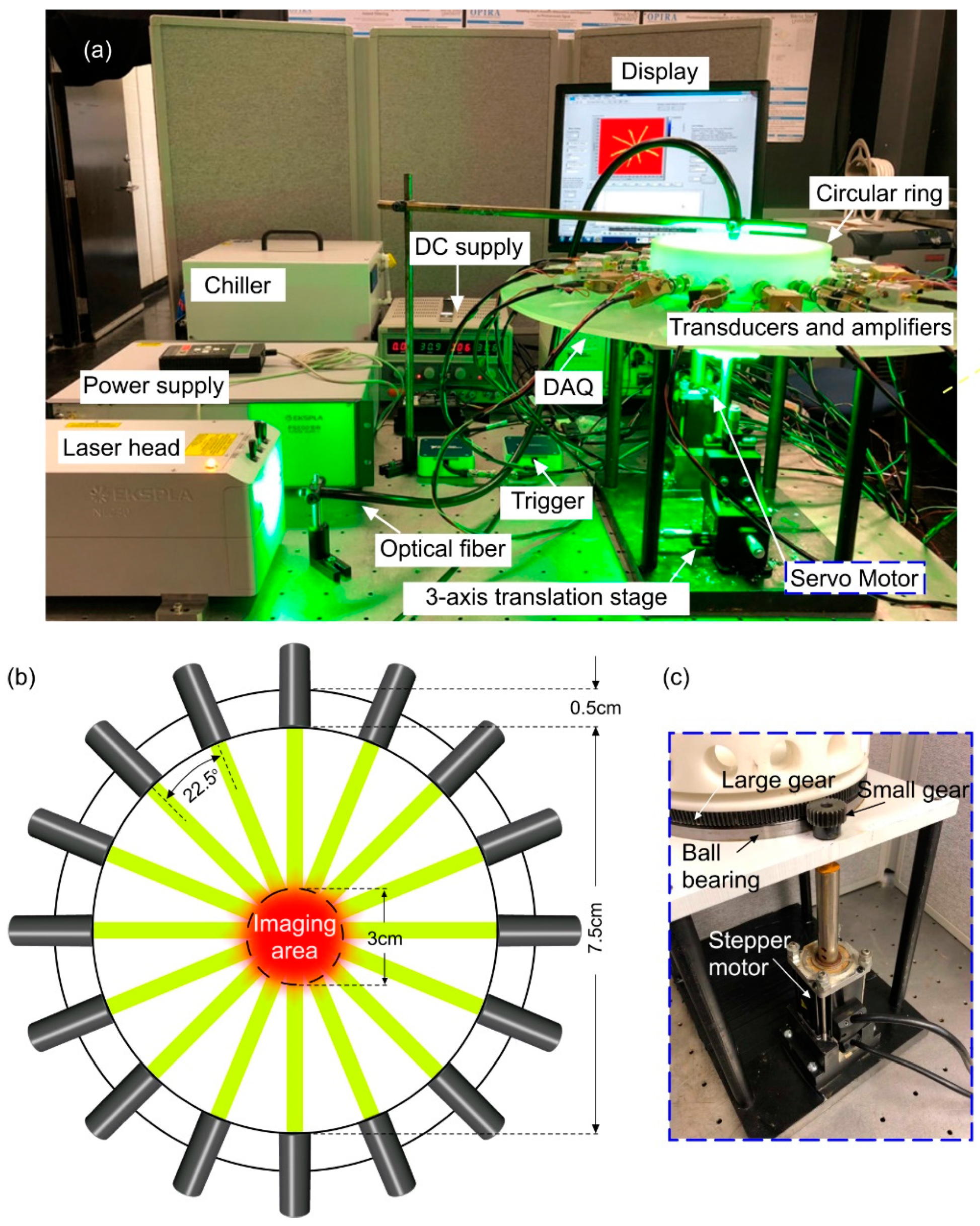 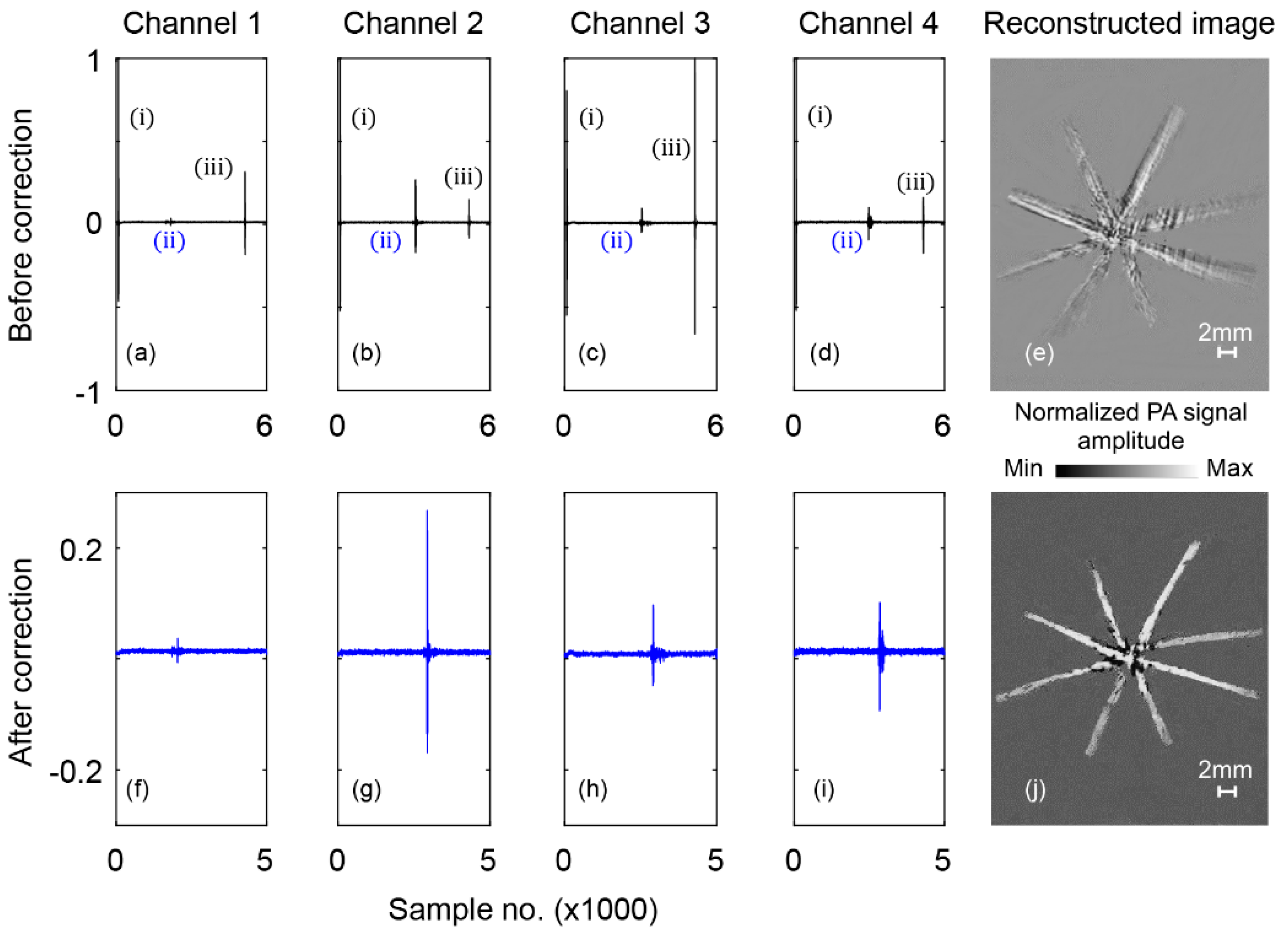