In recent years, the research into automatic aided detection systems for pulmonary nodules has been extremely active. Most of the existing studies are based on 2D convolution neural networks, which cannot make full use of computed tomography’s (CT) 3D spatial information. To address this problem, a computer-aided detection (CAD) system for lung nodules based on a 3D residual network (3D-ResNet) inspired by cognitive science is proposed in this paper. In this system, we feed the slice information extracted from three different axis planes into the U-NET network set, and make the joint decision to generate a candidate nodule set, which is the input of the proposed 3D residual network after extraction. We extracted 3D samples with 40, 44, 48, 52, and 56 mm sides from each candidate nodule in the candidate set and feed them into the trained residual network to get the probability of positive nodule after re-sampling the 3D sample to mm. Finally, a joint judgment is made based on the probabilities of five 3D samples of different sizes to obtain the final result. Random rotation and translation and data amplification technology are used to prevent overfitting during network training. The detection intensity on the largest public data set (i.e., the Lung Image Database Consortium and Image Database Resource Initiative—LIDC-IDRI) reached 86.5% and 92.3% at 1 frame per second (FPs) and 4 FPs respectively using our algorithm, which is better than most CAD systems using 2D convolutional neural networks. In addition, a 3D residual network and a multi-section 2D convolution neural network were tested on the unrelated Tianchi dataset. The results indicate that 3D-ResNet has better feature extraction ability than multi-section 2D-ConvNet and is more suitable for reduction of false positive nodules. View Full-Text
Keywords: computer-aided detection; deep learning; lung nodule detection; residual network computer-aided detection; deep learning; lung nodule detection; residual network
►▼ Show Figures 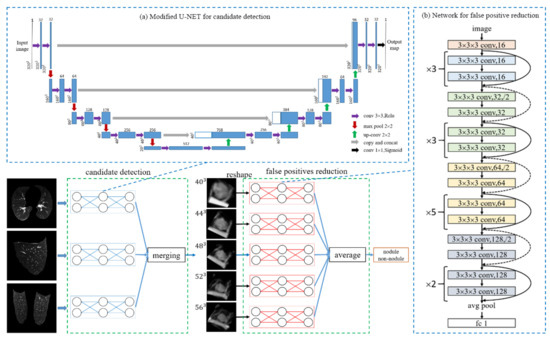