3D object detection has recently become a research hotspot in the field of autonomous driving. Although great progress has been made, it still needs to be further improved. Therefore, this paper presents FDCA, a feature deep continuous aggregation network using multi-sensors for 3D vehicle detection. The proposed network adopts a two-stage structure with the bird’s-eye view (BEV) map and the RGB image as an input. In the first stage, two feature extractors were used to generate feature maps with the high-resolution and representational ability for each input view. These feature maps were then fused and fed to a 3D proposal generator to obtain the reliable 3D vehicle proposals. In the second stage, the refinement network aggregated the features of the proposal regions further and performed classifications, a 3D bounding boxes regression, and orientation estimations to predict the location and heading of vehicles in 3D space. The FDCA network proposed was trained and evaluated on the KITTI 3D object detection benchmark. The experimental results of the validation set illustrated that compared with other fusion-based methods, the 3D average precision (AP) could achieve 76.82% on a moderate setting while having real-time capability, which was higher than that of the second-best performing method by 2.38%. Meanwhile, the results of ablation experiments show that the convergence rate of FDCA was much faster and the stability was also much better, making it a candidate for application in autonomous driving. View Full-Text
Keywords: autonomous driving; 3D vehicle detection; feature aggregation; bird’s-eye view; loss weight mask autonomous driving; 3D vehicle detection; feature aggregation; bird’s-eye view; loss weight mask
►▼ Show Figures 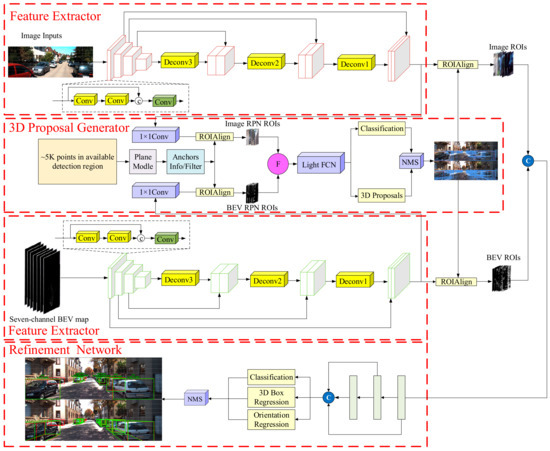