Elicitation of the Allelopathic Potential of Rice by Methyl Salicylate Treatment

Weed infestation is one of the most severe problems affecting rice production worldwide. Current weed control practices are either costly or pose a threat to the environment. The use of competitive rice genotypes seems to be a promising strategy. The aim of our study was to improve the allelopathic potential of three selected rice genotypes by foliar application of methyl salicylate (MeSA), a signaling molecule eliciting the plant defense response. Aqueous extracts of the shoots and roots of two competitive (UPR 2962-6-2-1 and Govind) and one non-competitive (UPR 2992-17-3-1) rice genotypes treated with MeSA solution at different concentrations (1 mM, 2 mM, and 3 mM) showed phytotoxic effects on the growth of the weed Echinochloa colona. Specifically, shoot and root extracts obtained from the competitive rice genotypes similarly decreased both the E. colona germination rate (9% to 44.5%) and the length of its roots and shoots (11% to 48%). Extracts of the non-competitive rice genotype showed a similar trend but lower effects, inhibiting the E. colona germination up to 32% and reducing the growth of the weed roots and shoots by 6–23.5% and 7–28%, respectively, according to the increasing MeSA concentrations. High-performance liquid chromatography (HPLC) analysis demonstrated an increase in different allelopathic phenolic acids in the three rice genotypes in response to MeSA treatments. Among the detected compounds, vanillic and protocatechuic acids showed the greatest differences compared to controls with values up to 2.1-fold higher in shoots of the two competitive UPR-2962-6-2-1 and Govind rice genotypes, while their roots were characterized by the greatest increases of 8-hydroxyquinoline (8.2-fold) and protocatechuic acid (1.7-fold). Differently, non-competitive genotype UPR 2992-17-3-1 showed the highest increase for gallic acid (2.2-fold) in shoots and for p-hydroxybenzoic acid (2.4-fold) in roots. Lastly, MeSA was found to improve the competitiveness of rice genotypes without any detrimental effect on the host plant. View Full-Text
Keywords: allelochemicals; elicitors; Oryza sativa; paddy; phenolics; phytotoxicity allelochemicals; elicitors; Oryza sativa; paddy; phenolics; phytotoxicity
►▼ Show Figures 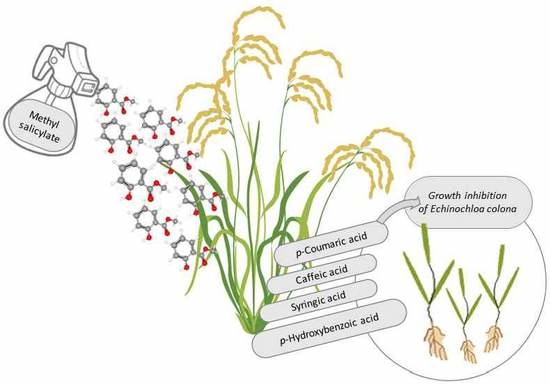