A Tool Support for Model-Driven Development: An Industrial Case Study from a Measurement Domain
Previous Article in Special Issue

:
Fly-rock induced by blasting is an undesirable phenomenon in quarries. It can be dangerous for humans, equipment, and buildings. To minimize its undesirable hazards, we proposed a state-of-the-art technology of fly-rock prediction based on artificial neural network (ANN) models and their robust combination, called EANNs model (ensemble of ANN models); 210 fly-rock events were recorded to develop and test the ANN and EANNs models. Of thi sample, 80% of the whole dataset was assigned to develop the models, the remaining 20% was assigned to confirm the models developed. Accordingly, five ANN models were designed and developed using the training dataset (i.e., 80% of the whole original data) first; then, their predictions on the training dataset were ensembled to generate a new training dataset. Subsequently, another ANN model was developed based on the new set of training data (i.e., EANNs model). Its performance was evaluated through a variety of performance indices, such as MAE (mean absolute error), MAPE (mean absolute percentage error), RMSE (root-mean-square error), R2 (correlation coefficient), and VAF (variance accounted for). A promising result was found for the proposed EANNs model in predicting blast-induced fly-rock with a MAE = 2.777, MAPE = 0.017, RMSE = 4.346, R2 = 0.986, and VAF = 98.446%. To confirm the performance of the proposed EANNs model, another ANN model with the same structure was developed and tested on the training and testing datasets. The findings also indicated that the proposed EANNs model yielded better performance than those of the ANN model with the same structure.
Keywords:
mining; fly-rock; ANN; EANNs; ensemble technique; bench blasting; artificial intelligence

Fly-rock induced by blasting is a particular concern of engineers and mining enterprises. Although the blasting techniques have been improved, there are still many hazards produced by blasting operations, especially fly-rock [1,2,3]. It is considered as one of the prime causes of explosion-related accidents on open-cast mines [4,5,6]. In fact, estimating the distance of fly-rock was proposed very early based on experimental techniques (e.g., [7,8,9]). However, due to improper energy use factors of explosives, such as improper stemming, excessive powder factor, inadequate burden, unfavorable geological conditions, to name a few, the uncontrolled rocks are still propelled beyond the security area [10,11,12]. Therefore, empirical techniques were unable to explain the relationship between fly-rock and influencing factors adequately, and were uncontrollable in predicting whether blast-induced fly-rock was unavoidable.
To overcome the limitations of empirical methods, data-mining techniques were studied and applied by many scientists for predicting fly-rock in blasting operations. Its effectiveness has been proven not only in fly-rock forecasts but also in general technical issues [11,12,13,14,15,16,17,18,19,20,21,22,23,24,25,26,27,28,29,30,31]. For estimating the distance of fly-rock, Monjezi et al. [32] used a branch of artificial intelligence (AI), namely ANN (artificial neural network), based on the blasting parameters (i.e., powder factor, the diameter of borehole, blast ability index, stemming length, and a charge per delay). Finally, the charge per delay was defined as the most critical factor for reducing fly-rock. Similar works using the ANN technique for predicting fly-rock were also conducted by Ghasemi et al. [33], and Trivedi et al. [34]. Another machine-learning algorithm of AI, namely SVM (support vector machine), was also applied to predict the fly-rock distance by [35], Manoj, Monjezi [36]. ANFIS (adaptive neuro-fuzzy inference system) was also an AI technique that has been successfully applied by Trivedi et al. [37], for predicting the fly-rock distance with an excellent result.
However, conventional AI techniques do not seem to satisfy scientists. Therefore, Hasanipanah et al. [38] utilized an optimization algorithm, namely PSO (particle swarm optimization), for developing a robust equation for fly-rock prediction. Another meta-heuristic algorithm (i.e., differential evaluation algorithm-DE) was also used by Dehghani and Shafaghi [39] to combine with the dimensional analysis algorithm (DA) for estimating fly-rock distance. Its performance was confirmed by a variety of empirical techniques in their study. Based on the actions of fireflies, Faradonbeh et al. [40] also optimized blasting parameters to minimize the distance of fly-rock, using the firefly algorithm (FA). The genetic algorithm (GA) was also included to optimize the recurrent fuzzy neural network (RFNN), for predicting the fly-rock distance [41]. Under the optimal power of GA, an optimal RFNN model was established with a promising result in their study.
An overview of the related works indicated that many AI techniques had been developed to predict the fly-rock distance. However, they have not been confirmed in different areas with different geological conditions. Furthermore, new methods/models are always the targets of research by scientists aiming to improve the accuracy of the previous forecast models, minimizing the risks posed by fly-rock. Therefore, we proposed a state-of-the-art technology of fly-rock prediction based on ANN models and their robust combination, namely EANNs (ensemble of ANN models).

This study was undertaken at a quarry mine in Vietnam, where the distance from residential was about 450–500 m (Figure 1). Herein, blasting was used as the primary technique for rock fragmentation using 75 mm of the borehole. Although many solutions have been proposed to minimize the distance of fly-rock; however, there are still many potential risks of unsafe activity due to fly-rock.
In order to investigate the causes, as well as the distance of fly-rock, we collected the basic parameters of 210 blasting events, including explosive charge per delay, powder factor, stemming, spacing, burden, and fly-rock distance, abbreviated as W, PF, ST, S, B, and FR, respectively. These parameters were also used for estimating FR by many previous scientists (e.g., [10,42,43,44]). Subsequently, the experimental datasets were analyzed and visualized.
To measure the distance of FR in this study, the iGeoTrans app was installed on an iPhone Xs Max, as shown in Figure 2. This app can work on iOS devices, which is a product of Hanoi University of Mining and Geology (HUMG), Hanoi, Vietnam [45]. iGeoTrans used a GPS (Global Positioning System) to mark the positions of blast points and the maximum distance of FR in this study. The remaining parameters (input parameters) were extracted from the blast patterns in blasting design, such as W, PF, ST, S, and B. Table 1 lists the properties of the dataset used in this research. Besides, a matrix of the characteristics of the FR database was established, as shown in Figure 3. In which “Corr” was abbreviated as “Correlation.”

Over the past few decades, the term “ANN” has become notable and has been adopted by a wide variety of applications, including atmospheric science, renewable energy systems, civil engineering [46,47], microwave computer-aided design, medicine and treatment, and natural resources research [48,49,50,51,52,53,54]. It is a branch of the AI family inspired by human brain biological neurons. The underlying architecture of ANN consists of input layers, hidden layer(s), and an output layer [55,56,57]. Here, layers are developed by fundamental elements of ANN well known as many highly interconnected neurons (nodes or processing elements) along with activation function [58,59]. The primary purpose of the input layer is to communicate the output layer via the hidden layer(s) using weight values and activation function. Usually, the network’s weights are adjusted (changes) and, accordingly, processed to obtain the desired response. Moreover, the ANN system with single hidden layer is adequate to compute the specified problem [60,61]. Whereas, ANN with two or more hidden layers pattern may create complex glitches [12]. The input elements (nodes) has been received the feature variables from raw environmental information and forwarded to the hidden layer. In this layer, it obtains knowledge of previous nodes and performs computations using encoded by weights and yield net input. Subsequently, the net input has been processed to the output layer through an activation function [62]. In the output layer, it has received the previous process information from the hidden layer(s) and computes the desired output with less error and more accurate. In the current study, the parameters include W, R, B, P, S, and FR and are considered as inputs and output, respectively. In ordered to predict blast-induced fly-rock efficiently, the following ANN architecture model was adopted and as depicted in Figure 4.

5. Performance Indexes for Evaluation of the Models

For model evaluation, this study used five statistical indexes, including MAE (mean absolute error), MAPE (mean absolute percentage error), RMSE (root-mean-squared error), VAF (variance accounted for), and R2 (correlation coefficient). They are computed as follow: where is the of measured fly-rock; is the of predicted fly-rock; is mean of measured values of fly-rock distance; n indicates number of observations in the training or testing datasets.

Fly-rock is an undesirable phenomenon that is generated by mine blasting. It is evaluated as the most dangerous phenomenon among the side effects of blasting. This study introduced a state-of-the-art technology of fly-rock prediction with high accuracy based on ANN models and their robust combination (i.e., EANNs). The findings indicated that the proposed EANNs’ performance was improved significantly when compared to the sub-models (i.e., ANN models). In other words, individual ANN models have served as positive input variables to improve the accuracy of the proposed EANNs model. This finding is impressive, and it should be applied in experimental conditions to control the distance of fly-rock, reducing the risks to humans and equipment.

The authors would like to thank Hanoi University of Mining and Geology (HUMG), Hanoi, Vietnam; Duy Tan University, Da Nang, Vietnam; and the Center for Mining, Electro-Mechanical research of HUMG. 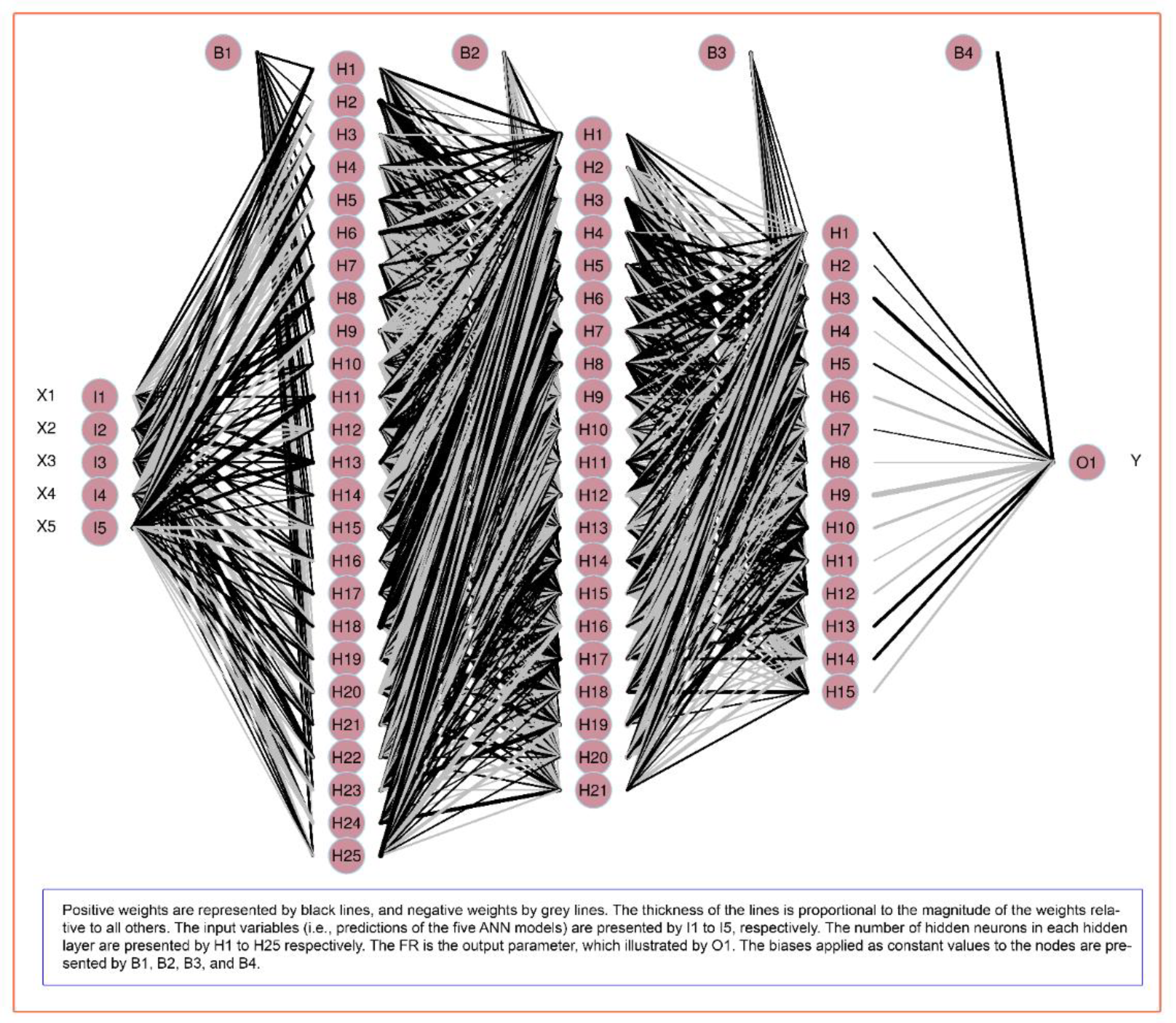 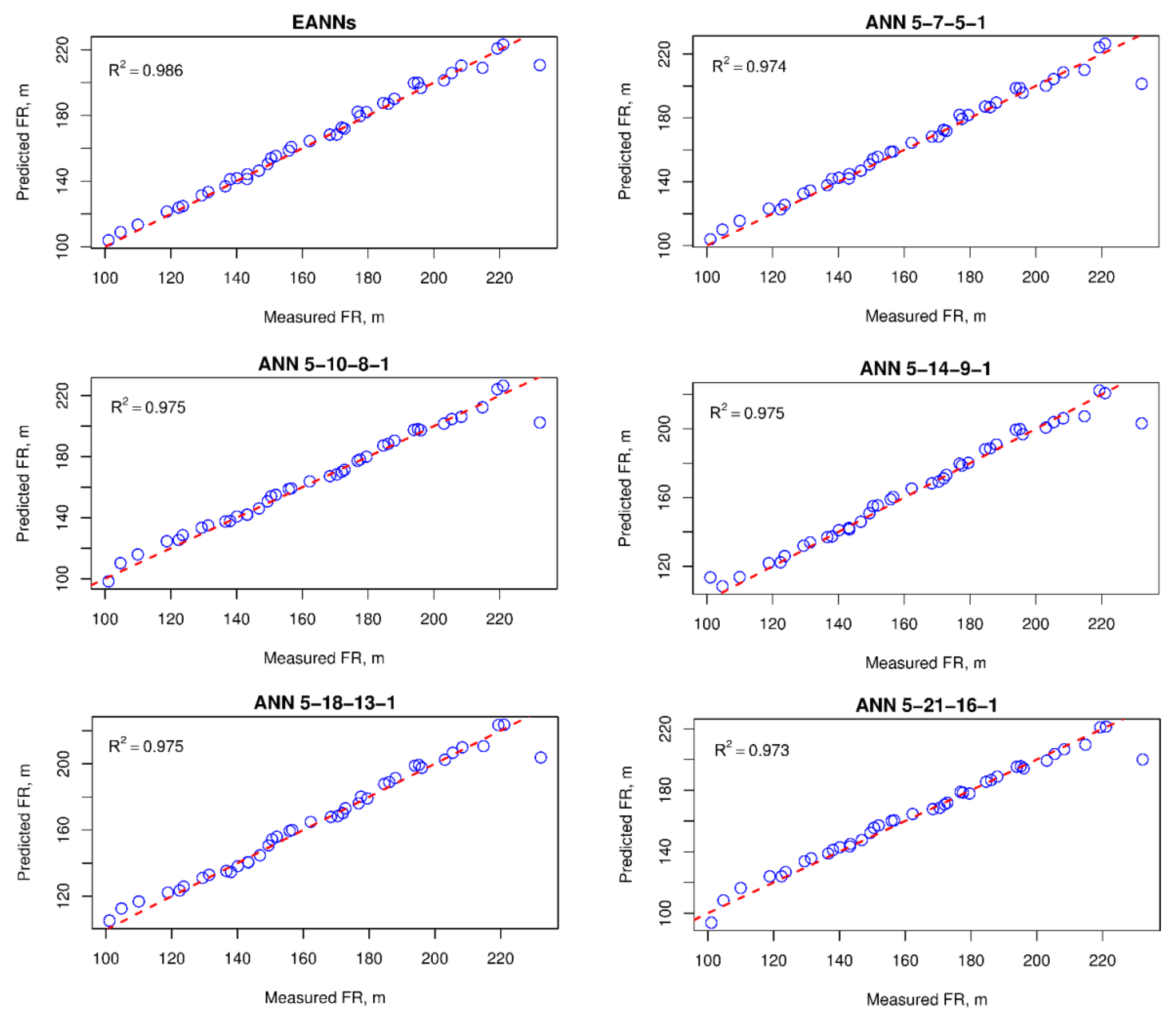 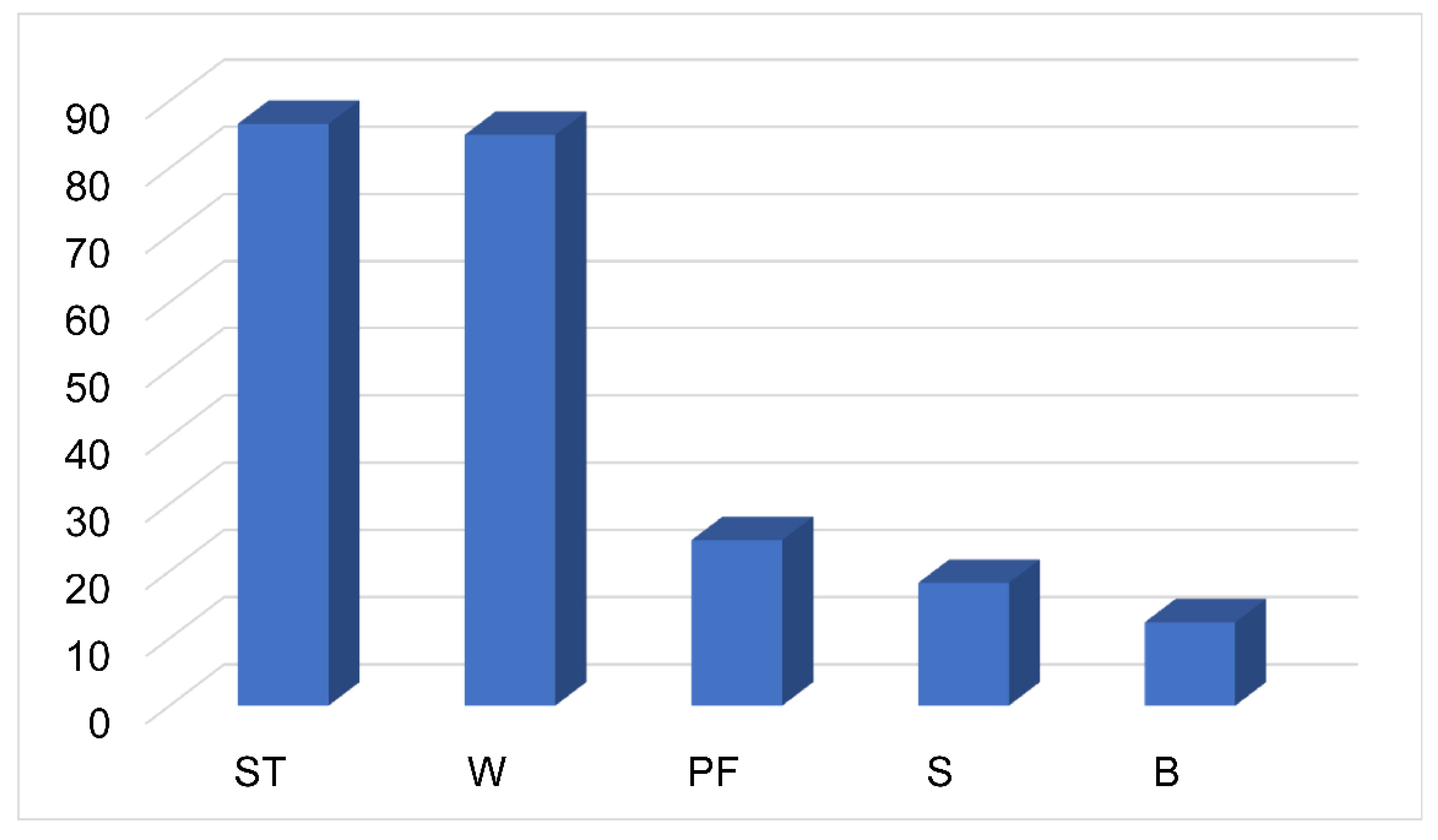