Electrical stimulation is used in clinical practice to treat a diverse range of medical conditions, including skeletal and neurological disorders. Application of electrical current to the body can activate the membrane of nerve cells, changing their metabolic activity, and increasing blood circulation [1]. Since the stimulation sensation and penetration depth may differ among electrical stimulation application methods, they must be properly controlled to prevent accommodation and to achieve an effective treatment result [2].
Electrical stimulation has a good safety profile and can be applied to control pain [3]. Pain is determined by the responses of the nociceptive system to different stimuli. However, the responses to stimuli are subjective, because they may vary based on each individual’s level of perception in the cerebral cortex [4]. The current conductivity is not uniform across all tissues at the time of electrical stimulation, hence, the actual patterns of maximum stimulation are diverse and highly irregular [3]. Nevertheless, pain is predicted to be correlated with the response to electrical stimulation owing to the fact that it is accompanied by multiple autonomic nervous system (ANS) symptoms [5]. Assessment of this pain threshold enables a further understanding of pain and changes in its symptoms [6]. Accordingly, the conductivity and excitability of the nerves have been measured quantitatively using electrophysiological methods in the clinic, while current threshold and variability in pain control have been used as objective assessment methods [4,7]. Therefore, research is required to obtain empirical evidence for numerous stimulation variables, because the parameters of electrical stimulation associated with the mechanism of pain control activation can be divided into two main categories: Stimulated region and electrical characteristics [2].
Interferential current (IFC) therapy, which involves the application of medium-frequency currents at 1–100 kHz, is a method of transmitting burst frequency currents within the body’s physiological range. IFC generates effective changes in the motor nerves because it does not cause the stimulated nerve fibers to adapt, and the extremely short pulse period used sends most of the currents directly to the tissues [2]. Liang et al. [8] and Picelli et al. [9] reported the following frequency-dependent changes occurring in the peripheral blood vasculature during electrical stimulation: A 2-Hz electrical stimulation is sufficient to suppress inflammation, increase cerebral blood flow and mitigate acute pain; a 100-Hz electrical stimulation affects the balance of central and local factors at a systemic level, thus preventing hyperactive bowel activity and blood pressure elevation. Kajbafzadeh et al. [10] also reported that IFC can relieve pain, reduce swelling, promote tissue recovery and relax contracted muscles by inducing vasodilation and increasing blood flow. In particular, medium-frequency currents have been used in the functional recovery of tissues by actively stimulating them and controlling associated pain (e.g., osteoarthritis pain, fracture pain, ischemic pain and mechanical pain) [11]. IFC is thought to exert its analgesic effects by increasing blood flow via the direct stimulation of the muscle fibers rather than the peripheral nerves, thus promoting the therapeutic process [12]. However, despite numerous studies demonstrating the therapeutic effects of IFC, no consensus has yet been reached regarding its analgesic mechanisms. Thus, it is crucial to determine the factors relevant to diagnosis, treatment evaluation and the effects of electrical stimulation [13].
The effects of the sympathetic nervous system are mediated by norepinephrine and epinephrine (noradrenalin and adrenaline) through three α1-adrenergic receptors, three α2-adrenergic receptors and three β-adrenergic receptors (β1, β2, β3) [14]. G protein-coupled receptors (GPCRs), such as the β-adrenergic and angiotensin II receptors, play crucial roles in regulating cardiac function and morphology. Their importance in cardiac physiology and disease is reflected by the fact that, collectively, they are the direct targets of over a third of the currently approved cardiovascular drugs used in clinical practice [15]. Beta blocker (β-blockers) induce reverse remodeling in a failing heart, improve survival, reduce the risk of arrhythmias, improve coronary blood flow (oxygen supply) to the heart and protect the heart against the cardio-toxic overstimulation by the sympathetic nervous system [14].
The physical reactions mediated through the ANS are manifested in response to external stimuli because of the crosstalk between the central nervous system and the ANS. Additionally, the physiological changes necessary for sustaining life are unconsciously or reflexively controlled, which is reflected in the cerebral cortex [16]. Many research efforts have been made to quantify this process using electrocardiography and cardiovascular, sweat and vasomotor function tests, and to explain the underlying mechanisms for the pathological aspects of the central neural activity, in order to set up efficient treatment strategies. In particular, many studies have been conducted to quantify changes in the ANS via heart rate variability (HRV) analysis [17].
HRV analysis, an important tool for assessing heartbeat changes induced by physiological factors, provides clues for diagnosing ANS-related abnormalities and identifying various changes in the physical health status [18,19].
The hypothesis of this study was that the HRV and pain thresholds between each group would differ according to the frequency and intensity of the electrical stimulation. The aim of this study was to explore the effects of electrical stimulation on the ANS by evaluating the HRV and pain threshold in response to the different conditions of IFC applied to the sympathetic ganglia. This article provides valuable basic data for the selection of effective clinical treatments based on the changes associated with each condition of electrical stimulation used in this study.

Different conditions of electrical stimulation resulted in distinct changes in HRV and pain control duration. Appropriate use of the frequency and intensity of electrical stimulation can be very important for physical therapy outcomes. Future studies should continue to focus on the stimulation of the spinal cord segments that affect the internal organs in more detail, and to comprehensively compare them with various examinations.

This work was supported by the National Research Foundation of Korea (NRF) grant funded by the Korea government (MSIT) (No. 2017R1C1B5076499).

I would like to thank Editage (www.editage.co.kr) for English language editing. 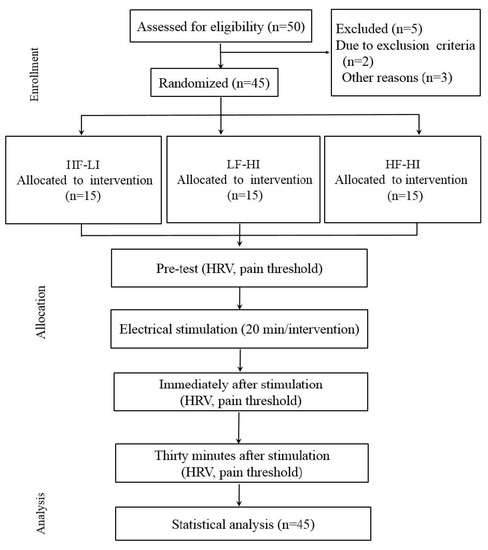